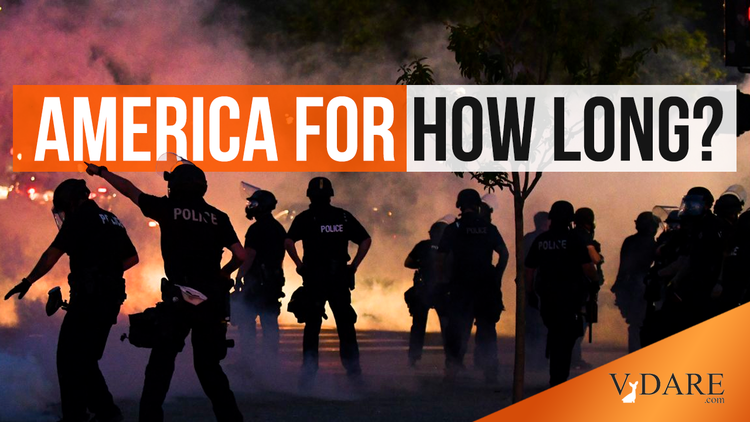 "America For How Long?": John Derbyshire's Interview With Michelle Malkin

Michelle Malkin joined John Derbyshire for a special episode of “Social Distancing.” Malkin asked, all too appropriately: "America For How Long?"

You can watch the interview on our YouTube channel or our Bitchute channel!

They talked about the censorship sweeping the nation and why it is so important for people with convictions to stand up and defend America... because no one is coming to save us! Malkin detailed the attack on her peaceful rally in Denver by antifa/Black Lives Matter members, and how the police stood down, i.e., failed to protect those who dared stand in support of the police! They also discussed what kneeling to the Black Lives Matter blood libel against white America represents.

The toxic combination of "pandemic panic" and "George Floyd derangement syndrome" has thoroughly destroyed the Home Of The Brave. It is a paradise for the depraved and dictatorial.

Anarcho-tyranny is how hoodlums can toss statues into rivers with impunity, while citizens disgusted by Black Lives Matter street graffiti are charged with "hate crimes"—as David Nelson and Nicole Anderson in Martinez, California, were by a George Soros-funded district attorney two weeks ago.

Anarcho-tyranny is how rioters can shut down highways and byways on a whim without fear of arrest, while commuters trying to escape the window-smashing barbarians obstructing traffic are charged with "assault"—as poor Jennifer Watson of Denver, Colorado, was this week.

Malkin also said she will no longer do “Back the Blue” rallies after what happened to her and those supporting police in Denver, saying, “I back the blue with a jaundiced eye.”

Just as at Charlottesville, police obeyed the politicians’ order to “stand down” and allow the attack.

Watch our past episodes of “Social Distancing”: