It’s disappointing to see the often conservative Washington Times report so erroneously about Muslim immigration to Germany, particularly that those newbies are needed for skilled jobs Germans allegedly won’t do.

BERLIN — Europe’s divisive debates over immigration and Islam may be putting sand in the gears of Europe’s economic engine.

Saying Germany needs skilled laborers to work in the factories and laboratories of its export-heavy economy, German corporate and industrial leaders are denouncing the string of anti-Islamic marches that have attracted growing crowds throughout the country in recent weeks.

“We distance ourselves from this movement and any xenophobic movement that damages Germany’s reputation,” said Alexander Wilhelm, deputy head of the Confederation of German Employers Associations, a national umbrella group.

“The PEGIDA movement is not representative of Germany, its people and its economy,” he said, using the German acronym for the Patriotic Europeans Against the Islamization of the West group that has organized the marches. [. . .]

This article is wrong on at least two counts — the real threat of Islam and the nature of the employment market.

The business representative quoted above says PEGIDA “is not representative of Germany” but a pre-Charlie-Hebdo survey found a different opinion: 57 percent of Germans feel Islam is a threat: poll.

PEGIDA stands for Patriotic Europeans against the Islamization of the West (Patriotische Europäer gegen die Islamisierung des Abendlandes). Started by Lutz Bachmann in Dresden, PEGIDA’s Monday night rallies grew from 350 participants last October 20 to 25,000 on January 12. Officials canceled the march on January 19 because of threatening Muslims, but Bachmann promised to resume next week.

Below, growing PEGIDA rallies against the Islamization of Europe show that many of the German people don’t want Muslim diversity. 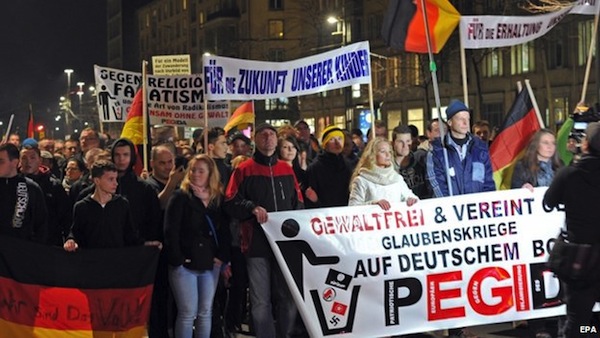 On the topic of workers needed to keep the German economy humming, there are millions of unemployed Europeans who could more prudently be hired rather than Muslims, who are sometimes difficult as employees, with their special demands for prayer breaks and such.

Following is an upbeat video segment from Deutsche Welle about young Spaniards moving to Germany to pursue professional careers. Spain is moving very slowly out of recession, but still has a jobless rate of 23 percent. Borderless Europe means that job seekers can go anywhere within the EU for employment, so Germany has plenty of available workers from the continent.

In December, it was reported that France had its highest number of unemployed people ever, nearly 3.5 million.

In Italy, 16 percent of college graduates are unemployed, so there are plenty of educated Italians ready to work (Grads in Italy have higher unemployment).

In addition, the idea that Muslims have extra-special work skills is a new one on me. They do not have a reputation for STEM expertise.

Finally, Germany is like all other first-world economies that are turning to robots, computers and automation to reduce its need for human workers. So the complaints of business are not based on genuine need, just the desire for cheaper workers.

BERLIN — Right-wing protesters marching against immigration and the so-called Islamicization of Germany may soon face a new foe: the rise of the machines.

With low unemployment and a shrinking workforce, the economic engine of Europe continues to endeavor to reinvent itself as a nation of immigrants, even as the demise of the welfare state and fear of multiculturalism have brought tens of thousands of protesters to the streets.

But recent reports suggest that robots, not immigrants, may pose the greatest threat to German workers — though the European Union has placed a $4 billion bet that robots will create rather than eliminate jobs.

The new wave of automation will hit white-collar workers hardest, according to Jeremy Bowles, a researcher at the Brussels-based Bruegel Institute.

“What’s fundamentally different is that (these advances) have the ability to affect a broader set of workers,” Bowles said, comparing the next generation of computerization to the first wave of robots that hit assembly line jobs in the 1980s.

The impact of these innovations will vary across Europe, Bowles argues. But in Germany, as in the U.S., robots may soon take as many as half the existing jobs, according to the Bruegel Institute’s analysis of the labor market.

These white-collar robots will be more software than hardware, eliminating service industry jobs in the way ATMs and automated telephone systems have already done. But — as the hostile reaction from German unions to other business models (think Amazon and Uber) has shown — bytes can be more revolutionary than bolts.

Why, then, is the European Union investing $4 billion to speed the development of robotics?

Automation was the bogeyman of the 1980s, but the automobile industry’s experience with it then proved that robots can not only increase productivity but also create jobs, says Uwe Haass, secretary general of the EU’s robotics program.

“Robotics is seen as a pivotal technology, which is not only going into robotics per se but into so many other branches and technologies. It will create new jobs because [it will make] new businesses possible,” Haass said.

The introduction of robots to perform deepwater inspections of oil drilling facilities, for example, has created a profitable new business sector following disastrous oil spills in the North Sea and Gulf of Mexico.

A new generation of robot tools that operate like a worker’s assistant, rather than their replacement, can help ensure that Germany’s small, family-owned manufacturing businesses can stave off low-cost competitors from Asia.

Some robots in industries like agriculture, such as a self-driven picking machine, take over jobs that would otherwise go to migrant workers. But others make possible the tasks eliminated by high labor costs. In “precision farming,” for example, a robot nurse tends to individual plants, injecting water, pesticide or fertilizer in the precise amounts required — rather than spraying the entire field.

“All this is mesmerizing,” said Haass. “When I talk with people in agricultural industries, they are flabbergasted by these ideas.”

The EU suggests that robotics will have the net impact of creating 240,000 jobs across Europe, while a study by the International Federation of Robotics found recently that the 1 million industrial robots currently in operation were directly responsible for the creation of 3 million jobs.

To take advantage of those new opportunities, workers will need new skills, says Haass — and that will create major new challenges.

Over the longer term, these new developments could also mitigate immigration by unskilled workers, says economic researcher Bowles, because machines will become cheaper than workers more quickly in rich countries than in poor ones. But the rise of the machines is likely to inspire a lot of white-collar hand wringing before that happens.

“Historically, technology has created as many jobs as it has destroyed,” Bowles said. But “this exact topic has created panics for decades and decades.”