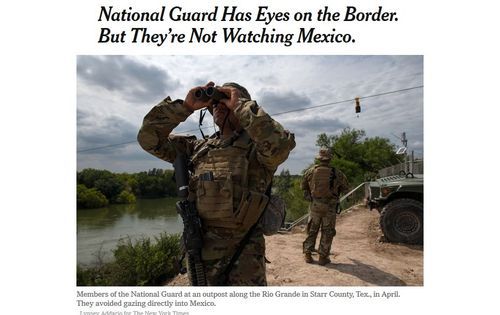 According to the New York Times, the National Guard is twiddling its thumbs on the border. [National Guard Has Eyes on the Border. But They’re Not Watching Mexico, By Manny Fernandez, May 15, 2018] As in Afghanistan, the Rules of Engagement governing border security as reported in the NYT are asinine. I wonder what DoD genius came up with them.

Sounds like someone from the "Deep State" trying to undermine what the president wants to do, and what the country is demanding, while giving the appearance of doing something. Unlike federal troops the Guard can be given law enforcement authority when under 32 USC. Better, federalize them and start laying razor wire, digging a trench and building a berm. Use the troops from Ft. Hood and Ft. Bliss as well. Add a warning to Mexico that those trying to enter illegally will be shot. The Israelis have built quite a border fence and it works, and as we saw they will shoot.

Only the subversives and sissies in our own government are thwarting our border security, the president should squash them.

James Fulford writes: One cheerful note—the soldier pictured has a magazine in his weapon, which we can hope is filled with useful cartridges. In a 2012 column called Diversity Is Strength! It’s Also...Unarmed American Soldiers Dying In Afghan “Green On Blue” Shootings, I noted that the American Armed Forces have what amounts to a mania for keeping unarmed soldiers in positions of danger. This appies to the National Guard even more strongly than it does the Regular Army downrange. See

Briefly, the reason for disarming soldiers is that the military is terrified of either a gun accident, or soldiers shooting someone they're not supposed to shoot. They are more worried about this than they are about soldiers being attacked while unarmed. This is the same impulse that actuates civilian gun control, but it's much, much, stupider.