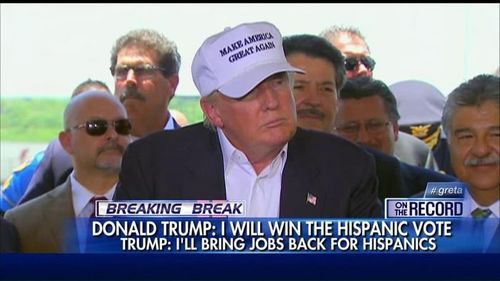 Memo From Middle America: Trump Says He Loves Hispanics—And Some Love Him Back

The Main Stream Media and the GOP Establishment keep telling us Republicans need to win the Latino vote, and therefore have to reject Donald Trump and immigration patriotism. But there’s not much evidence to suggest that’s the case. Indeed, Trump may have a better shot at winning Latino voters than the latest Great GOP Hispanic Hope, Marco Rubio. (Memo to GOP: Rubio is a Cuban. Most Hispanics are Mexicans. It’s not the same thing).

Of course, that’s not what the likes of Mitt Romney and Lindsey Graham will tell you. Their brilliant strategy seems to be to simply give the La Raza lobby everything it wants. Not surprisingly, that’s what the consultant class wants as well:

At the present moment, Marco Rubio is the best chance Republicans have toward bridging the Latino-GOP divide. Avoiding an anti-immigrant campaign and ethnic appeals can go a long way toward repairing the damage caused by Trump’s campaign. Ultimately, however, Rubio will have to change his position on immigration and align it with Latino voters if he is to win the hearts and minds of Latinos in 2016.

In other words, Rubio is the best GOP candidate to appeal to Latinos—but even he is too hardline on immigration and must become more liberal!

Indeed, it doesn’t take much digging to find that two other members of the group, Barreto and Segura, have been working for the Hillary campaign as consultants. [impreMedia/Latino Decisions Battleground States Survey, Latino Decisions, November 9, 2015]

This talk about the need for Republicans to win the “Latino” vote is a bad faith argument. The real goal is to get the GOP to move left on immigration and other issues by convincing the party leadership that resistance is useless.

But the numbers don’t add up. By and large, Latinos will support the more economically Progressive party.

To the contrary, as Steve Sailer has repeatedly argued, the GOP’s future (if it has one) depends on winning a larger share of the white vote.

But what’s more, the same policies that would appeal to most white voters would also pick up a large share of the minority vote.

Indeed, a new poll indicates that the share of Hispanics who approve of Trump’s most controversial statement on immigration is equal to the share that voted for Mitt Romney. Trump famously said that some Mexicans are “bringing drugs. They're bringing crime. [And] they're rapists. [Though] some I assume are good people.”

The poll showed 28 percent of Hispanics either strongly or somewhat approved of the statement, with 12% not sure [The Economist/YouGov poll November 5-9, 2015] And Romney won just over 28% of the Hispanic vote in 2012.

Trump seems to be aware of need for Republicans to turn out the white vote, while still taking a chunk of the minority vote by appealing to them as Americans. As I heard him say at a rally in Oklahoma:

Regardless of what Republicans think of him now, most will vote for him once the general election rolls around if Trump wins the nomination. And by hammering away on immigration and other issues, Trump can turn out those white voters who stayed home in 2012.

But why would any Hispanics support Trump? For the same reason white workers would. Trump’s promise to control immigration serves the interests of blue collar American workers of all races:

Anecdotal evidence that Mr. Trump has more appeal among Hispanics than he is credited with resides in the surprising—though far from scientific—results of interviews with Hispanic workers and political players on the front lines of the election. Many declined to allow their last names to be published for fear of backlash for the sentiments they expressed.

Note the fear that these workers have that they might get in trouble for supporting for Trump. That alone shows how important it is for Republicans to break the anti-American racial politics of multiculturalism.

“I don’t care if he likes me or not as a Hispanic or Latino, as long he creates the jobs he promised. He is never going to take me out for a beer, so it doesn’t matter whether I like him or not either. The job of the president of the United States is to create jobs, not to be the friend of every American.

Mr. Maffatt understands politics better than many Americans, including many native-born Americans. Maffatt sees beyond the juvenile question of whether or not a candidate “likes” people or not.

“When we are new here and desperately trying to make a living, we will charge less than white Anglo-Saxons. We eventually improve our lot, but then when we have more new immigrants coming in, we’re the first to lose our jobs because they’re willing to work for less money.”

Hallow also quotes Oscar, a legal immigrant from Peru who works as a bellman in New York City:

“We don’t believe anybody but Trump. Trump won’t have to sell himself to anybody to get elected. Trump, he gives us hope; so it’s hope over belief.”

What is Oscar hoping for?

“That he’ll [Trump will] build the wall and stop more from coming in to lower our wages and move us out of our jobs.”

The article references four anonymous waiters in Virginia (two from Bolivia and two from Guatemala), all four of whom have privately expressed support for Trump. Their reason: “He [Trump] will build the wall.”

The six Hispanics quoted are all immigrants, whom we are constantly told come “for the jobs.” But these immigrants understand that Trump is fighting to protect their jobs from cheap labor profiteers who could destroy them by simply importing more immigrants.

The GOP Establishment seems to believe Hispanics can be won over by slapping a superficial “diverse” face on the same old economic agenda. But Trump is offering Hispanics concrete economic reasons to support him.

And while he may not win a majority, the fact that Trump is unapologetically laying out a platform that appeals to the economic interests of at least some Hispanics suggests Trump may indeed win a larger share of the Latino vote than the GOP consultant class or the Main Stream Media anticipates.

Given these demographic and electoral realities, and especially given that Republicans simply have to increase their share of the white vote, why not appeal to voters as Americans, rather than try to outpander the Democrats? Republican candidates would do no worse. If Trump gets the nomination, the GOP might find it will even do better.

More importantly, such a strategy would be a step towards rebuilding that common American identity mass immigration has done so much to destroy.