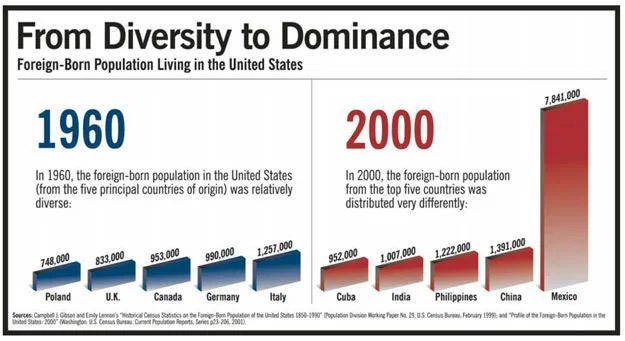 Immigration vs. "Anglo-Protestant" America – Which Side Are The Neocons On?

It was probably inevitable that sooner or later the truth about mass immigration and its impact on American culture would seep down to Harvard University.

This week it happened, and a tip of the hat is in order to Harvard's distinguished scholar Samuel P. Huntington for arriving at much the same conclusion that I and many other critics of mass immigration have been arguing for two decades or more.

As the Chronicle of Higher Education describes Professor Huntington's new essay [The Hispanic Challenge, By Samuel P. Huntington, March/April 2004] in the magazine Foreign Policy, "High levels of Hispanic immigration threaten to disrupt the political and cultural integrity of the United States," and "the United States faces the loss of its 'core Anglo-Protestant culture' and may soon be divided into 'two peoples with two cultures (Anglo and Hispanic) and two languages (English and Spanish).'"

Better late than never, I guess, but far be it from me to quibble.

Of course, the Huntington thesis has not escaped controversy, and the Chronicle recounts several (mainly Hispanic) academics who challenge his argument. One critic pants that the Huntington article is "misinformed, factually inaccurate, inflammatory, and potentially injurious to public policy because of its potential for being used as a further baseless rationalization for anti-immigrant and anti-Mexican politics."

We wouldn't want that, would we, so Mr. Huntington must be wrong. [Critics Assail Scholar's Article Arguing That Hispanic Immigration Threatens U.S. February 24, 2004, Subscription Excerpt]

The Harvard scholar, one of the world's leading political scientists, is the author of The Clash of Civilizations, a widely praised study of how Western and non-Western cultures are in conflict in world affairs.

His essay and a forthcoming book from which it's drawn now seem to apply the "clash of civilizations" model to what's going on inside nations—because of immigration.

It's not surprising people on the other side of the clash don't like him talking about it or suggesting something should be done about it.

One who doesn't like it and isn't even Hispanic is David Brooks, [dabrooks@nytimes.com], resident neo-conservative at the New York Times, who wasted no time in lobbing a few smacks at the Huntington essay before it even popped off the presses.

Mr. Brooks, who supports the Bush amnesty and mass immigration generally, knows he can't denounce Harvard professors as the kind of backwoods bigots he and other neo-cons want to paint all other immigration critics.

He also knows that if skepticism about immigration has actually reached the backwoods of Harvard, then the pretensions of the Open Borders lobby are in trouble.

Mr. Brooks' critique of the Huntington thesis is somewhat more subdued than what came from the fevered brows of the academics quoted above. His main case against it is economic—that Latino immigrants are doing much better than the essay seems to claim.

But Mr. Huntington's thesis doesn't depend on economic arguments.

He's arguing that the sheer number of Hispanic immigrants and the sheer numbers of those who will keep coming if immigration isn't halted, plus their very different linguistic, cultural, and political identities, will serve to split American society in two.

Cultural, not economic, forces are what will threaten the "core Anglo-Protestant culture" of this country.

And if there's anything about the thesis Mr. Brooks doesn't like, it's precisely the claim that we have an Anglo-Protestant core at all.

"Frankly," he writes, "something's a little off in Huntington's use of the term 'Anglo-Protestant' to describe American culture."

What's off, in his view, is that "the mentality that binds us is not well described by the words 'Anglo' or "Protestant.'"[The American Dream, NYT, Feb 24,2004]

What does describe us, Mr. Brooks thinks, is that "Americans share a common conception of the future."

Maybe so, but if they do, it's because that conception comes from the culture created and informed by the Anglo-Protestant core. If and when that core vanishes, the conception will vanish.

In so far as a "conception" does or can make us Americans, it does so not simply as an intellectual abstraction but because it has ethnic and cultural roots, and if Mr. Huntington is arguing that mass Third World immigration threatens those roots and the core they create, he's right.

What's interesting about the controversy about the Huntington thesis is not only the mainly Hispanic hostility to it but also the dislike with which neo-conservatives like Mr. Brooks are greeting it and the discomfort they experience whenever anyone—especially Harvard professors—starts talking about what the real roots of the American identity are and who planted them here.

As noted, it's not surprising people on the other side of the clash of civilizations don't like what Mr. Huntington has to say.

But to some people who don't know the neo-cons so well, it might be astonishing they're on the other side of the clash too.