Earlier, by Allan Wall (2006) Memo From Mexico | Iraq Effort Proves We Can Seal The Border—If We Want 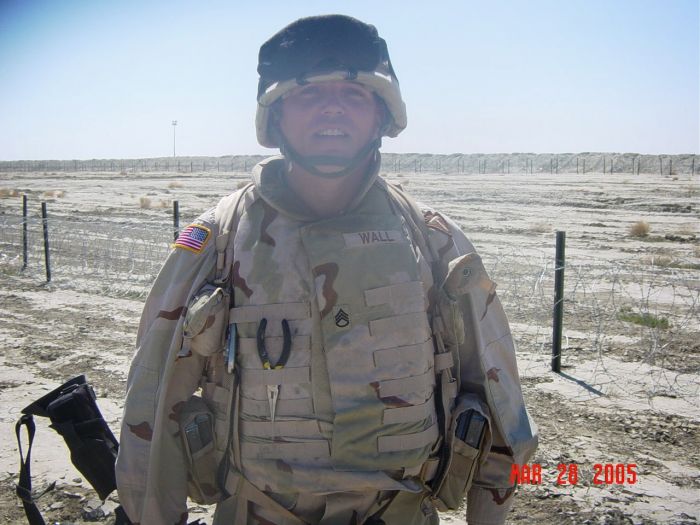 At the now famous tête-à-tête with incoming House Speaker Nancy Pelosi and Senate Minority Leader Chuck Schumer, President Trump vowed a partial government shutdown unless Congress gave him $5 billion for a border wall. The leftist pair told him to forget it. He said he would use the military to build the wall, and all week we heard that a shutdown was coming December 21. Immigration patriots were ecstatic. But they were also concerned that Trump would fold. Today, The Washington Post reported that Trump has done just that. Congress will pass a continuing resolution, sans the border wall money. [Trump Backs Off Demand For $5 billion For Border Wall, But Budget Impasse Remains Ahead Of Shutdown Deadline, by Erica Werner, Damian Paletta and Seung Min Kim, December 18, 2018]

Whether Trump will sign we don’t know. But more about that political contretemps later. 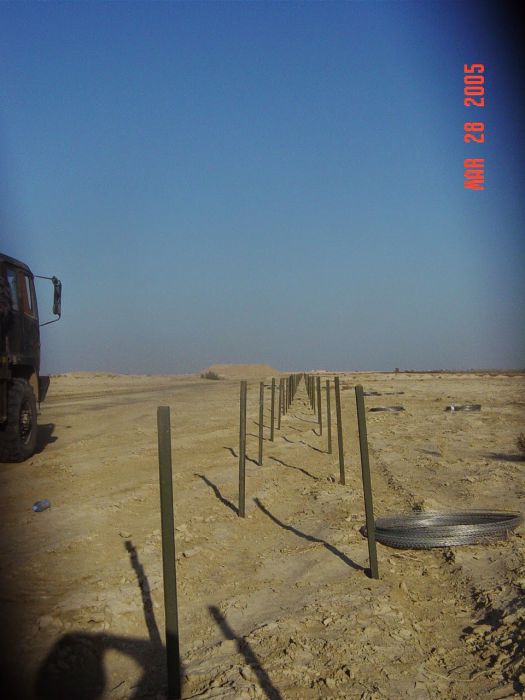 I want to address the skeptics who say a wall won’t work. The Pelosi-Schumer Democrats and the experts they cite—as Schumer did in the meeting—are lying. Or just plain wrong. Walls work. I saw how effectively they work when I deployed with the Texas Army National Guard to Iraq in 2005. Walls and fences were everywhere. They were the prime means for protecting bases and even towns.

The U.S. occupation was at its height. What the Coalition had accomplished infrastructure-wise was truly amazing. The U.S. had 100 military bases throughout Iraq, all of which had to be secured and guarded. Barriers, checkpoints, guard towers and patrols protected every single one. Security was the    No. 1 priority at every base.

The biggest share of our casualties were victims of bombs set on or near Iraqi highways, the dreaded improvised explosive devices known as IEDs, but the bases had to be supplied. American soldiers in Humvees escorted vast fleets of trucks, usually driven by Pakistanis or Indians. It was somewhat like the U.S. Cavalry forts in the Old West. Land “outside the wire” was known as “Indian Country.”

You had to be careful on base: infiltration was a danger. But for the most part, the bases were safe. Security systems kept them that way.

I worked at several jobs, including perimeter security for a small U.S. base. A fence with checkpoints to enter and exit surrounded the base. The important lesson is that a wall or fence is great but not sufficient. Armed personnel with the means to defend themselves must be posted to deal with infiltrators and other threats. 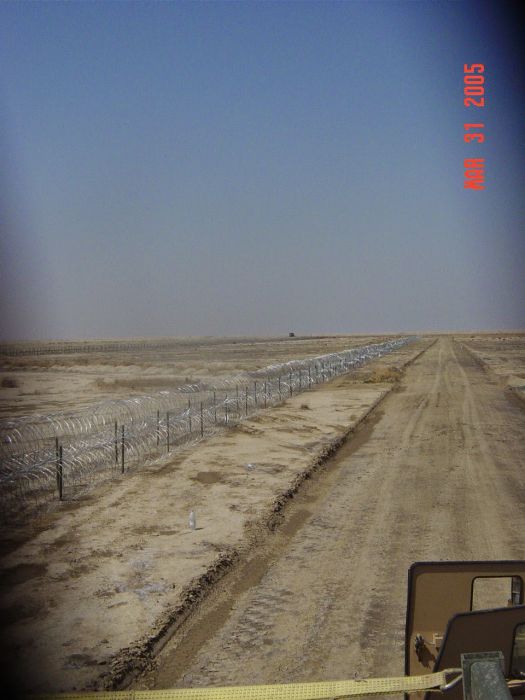 Patrolling was part of security, too. Ubiquitous Humvees showed the locals that we were there and in charge. We searched vehicles and erected checkpoints randomly.

Later, I was ordered to join a construction crew to build a new outer fence to guard the base all around.  We were an infantry unit, not an engineering unit. But when you get in-country, your Military Occupation Specialty [MOS] doesn’t matter. You do what needs to be done. So other sergeants joined me on the construction project. An Army engineer showed us how and what to do with the material in one day.

After that, we supervised a crew of Iraqis building the fence. With my rudimentary Arabic, I became the de facto translator. I got along well with the Iraqis and had some good discussions. Once they even invited me to attend a Shiite festival in the cities of Najaf and Karbala. I couldn’t go, but I appreciated the sincere gesture. (That was 13 years ago, I wonder how those guys are doing now.) Regular Army soldiers also helped.

We did a pretty good job. The fence was composed of steel posts, three strands of concertina wire, and another strand of barbed wire. That fence looked good...and effective.

For the U.S. border, we need a taller fence with harder materials. But our fence would be better than nothing and could work temporarily. It would work if watched and patrolled.

Other materials we could use include products from HESCO, a British company and “the original developers of earth-filled barrier technology,” large collapsible containers that are filled with sand, soil, rock or gravel. We used them on my base in Iraq. Click here for photos.  HESCO not only makes defensive barriers but also amazingly simple border security barriers.

And the HESCO RAID Rapid Barrier Deployment System can be set up in a jiffy: “Over 1000 feet in under 60 seconds.”

Watch it happen below:

It must be filled, but if earth-moving machinery is close and ready to go, that shouldn’t take that long. A HESCO barrier could be set up rapidly on the border, until something more permanent is erected.

If that doesn’t suit Nancy and Chuck, we can always use the same, old-fashioned technology the ancient Romans employed: concrete.

Maj. John Spencer, Iraq veteran and scholar with the Modern War Institute at the U.S. Military Academy at West Point, has described how American forces in Iraq used concrete.

The demand for concrete was immense. New contracts had to be developed and concrete factories had to be found, built, and expanded in multiple places across Iraq. Getting concrete became as important a mission as emplacing it. ...

One brigade emplaced over 30 miles of twelve-foot-tall concrete T-wall barriers to create what they dubbed “safe communities.”

[The Most Effective Weapon On The Modern Battlefield Is Concrete, Modern War Institute, November 14, 2018.]

During the Battle of Sadr City in 2008, Spencer reported, U.S. forces, working under fire at night, laid down 12-foot high concrete barriers, eventually walling in Sadr City, a 13-square mile sector Baghdad, and the home of the Jaish al-Mahdi militia. 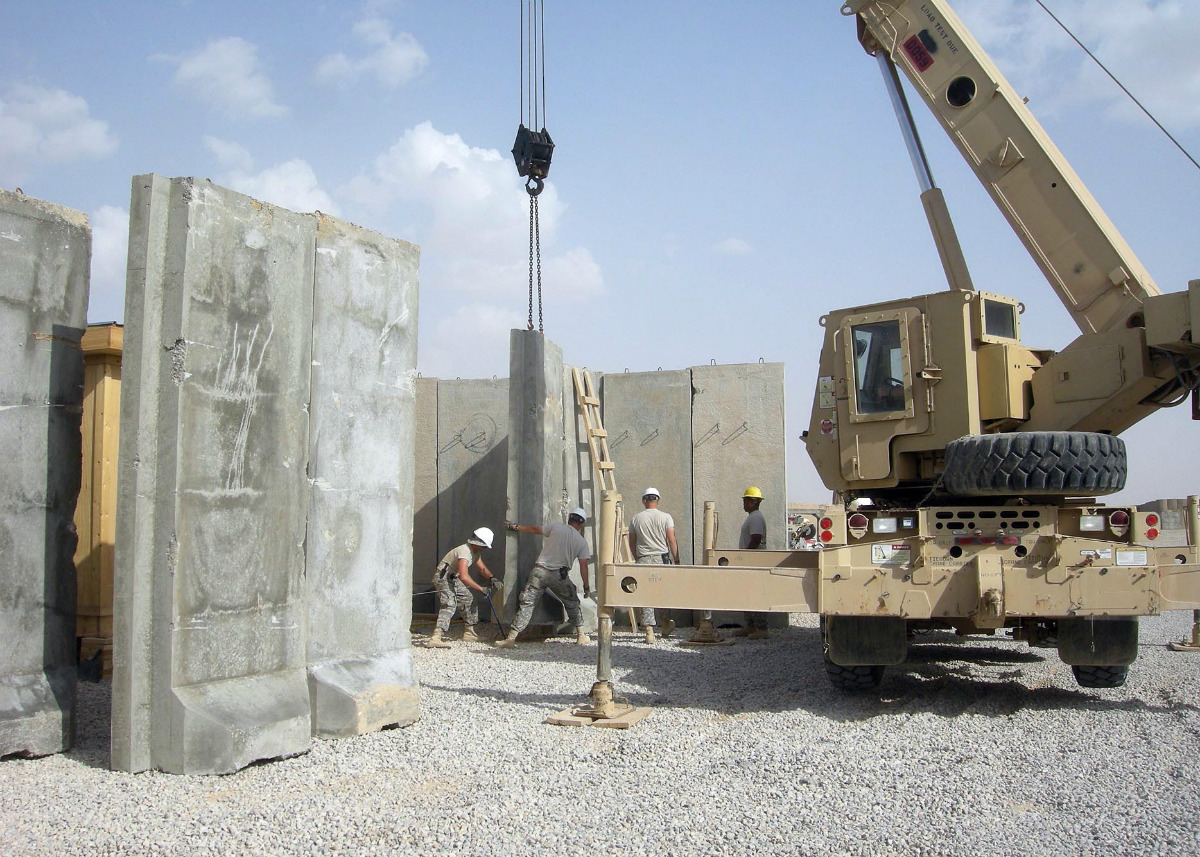 Question for Nancy and Chuck and their “experts:” Why can’t the U.S. military erect similar concrete barriers on the border? If we secured every single one of our 100 bases in Iraq, why can’t we secure our own border?

Israel ... had a real problem with illegal immigrants coming in from the southern border, about 16,000 in one year. In two years, they constructed 143-mile fence, about $2.9 million per mile, and it cut that illegal immigration rate from about 16,000 to I think 18. Cut it by 99 percent.

Trump has said likewise, and that sent the bloodhounds at Politifact sniffing for a fib. But Politifact admitted that Israel’s border fences with Egypt slashed illegal immigration on that border by 99 percent:

[E]xperts say the fence alone is not responsible for the dramatic decrease in illegal immigration, policies have also deterred illegal border crossings.

Well, yes, of course that’s true. A fence or wall alone is not enough, but must be used in conjunction with other policies by a government determined to control its border. Here is a photo of Israel’s border fence with Egypt in contrast to the old border fence with Egypt. [Border Fence in Israel Cut Illegal Immigration By 99 percent, GOP Senator Says, by Miriam Valverde, February 13, 2017].

As for Trump’s promise to use the military, its plethora of engineering units could easily construct barriers. The Army has the U.S. Army Corps of Engineers, which has, again, helped Customs and Border Patrol with construction in the recent past. The Air Force has the Air Force Civil Engineer Center and the RED HORSE squadrons (acronym for Rapid Engineer Deployable Heavy Operational Repair Squadron Engineer).  The Navy has the Civil Engineering Corps and the naval construction force known as the Seabees (from construction battalions), whose motto is “Can Do.” John Wayne made a movie about them! The Marines and the Coast Guard have engineers as well.

Which brings us back to The Donald’s contentious meeting with Pelosi and Schumer, where the two Leftists declared that wall funding was out of the question. Aside from claiming that recent improvements to existing U.S. border barriers had dramatically reduced illegal crossings, Trump said he’d use the military to build the wall.

Though the Army Corps of Engineers, for instance, has been heavily involved in border protection, including building double-layer fencing, handing it the “reins entirely on the funding, construction, and monitoring of the border wall,” The Atlantic reported, would elevate its mission to a point where congressional authorization would be necessary [Could Trump Actually Use Military Funding for His Border Wall? by Priscilla Alvarez, April 2, 2018]. As well, “military officials, Democrats, and Republican defense hawks would likely oppose taking resources away from existing DOD projects and shifting them to the wall.”

And if Trump went that route, you can bet the radical Left would be in court with lawsuits to stop it, just as they went to court and persuaded a Leftist judge to block Trump’s order refusing asylum to illegal aliens.

So, then, what about the shutdown and Trump’s promise? As expected, one of the border-wall surrender monkeys is Sen. Mitch McConnell, the weak-chinned GOP majority leader. “The American people don’t like it,” he said.(See the Washington Post  story quored earlier.) “There’s no education in the second kick of a mule. We’ve been down this path before, and I don’t believe we’ll go down this path again.”

Unless Trump vetoes the spending bill, the Pelosi-Schumer Axis of Evil wins again. If Trump signs, and he were serious, he’d do what he promised in the three-way confab: use the military. But again, that’s a prime target for leftist legal attack.

The Pelosi-Schumer Democrats do not oppose a wall because it won’t work. They oppose it because it will work. It will cut off the stream of future Democratic voters who have already done so much to dispossess the Historic American Nation.

Trump must ignore McConnell and those advocating surrender. He must not sign any bill that does not include wall funding.

Immigration helped elect him in 2016. And it might just help defeat him in 2020 if he cries uncle now.