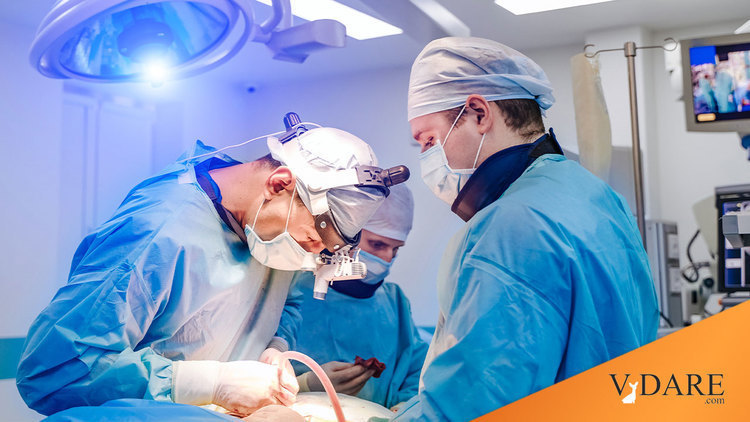 A certain Tom Shaw of Las Vegas wrote an interesting letter which was recently published on the Las Vegas Review-Journal website. It asked this question:

"Here is my question: If I had a life-threatening medical condition, would it be acceptable for me to illegally enter Mexico, for example, for free and endless treatment even though I'm not supposed to be in their country in the first place? I could possibly explain to Mexican authorities that I have no job, no insurance and no means to pay for my hospital charges. What are the chances that their government would be compassionate enough to overlook my selfish and law-breaking ways and pass my financial responsibilities onto the backs of their own citizens—no matter the cost? They might even move my family to the front of the line at their emergency rooms since we have nowhere else to go. Because I have a life-threatening condition, that would be the humanitarian thing to do."["Mexico Would Take Care of Any of Us, Wouldn't It?" August 24, 2009]

Mr. Shaw makes an excellent point. After all, it sure works the other way doesn't it? Droves of Mexicans enter the U.S. illegally and avail themselves of free medical care in our Emergency Rooms. If some form of Obamacare eventually gets foisted upon us, this situation will most likely continue.

As Tom Shaw asks, would it work the other way around? Would Mexico allow the same sort of thing in its own territory?

What if we decided to test the proposition by encouraging hordes of Americans to go down south and demand free medical care?

Somehow, I don't think that would work.

In the first place, Mexico is much less tolerant of illegal immigration than we are (see my VDARE.COM article More Hypocrisy : How Mexico Handles its own Illegal Immigration).

Secondly, in Mexico they use Emergency Rooms for Emergencies—whereas in the U.S., they´ve become free dispensaries of primary care.

And, don't forget, unlike the U.S., Mexico doesn't allow foreigners to get involved in political demonstrations. Mexican officials might consider an American version of the Mexodus to be a sort of demonstration.

Meddling Mexican officials would go ballistic if a Mexican illegal alien in the U.S. were denied medical service. Nevertheless, the phenomenon of people being turned away for medical care is far from unknown in Mexico.

For example, during the recent swine flu outbreak there were reports of patients—Mexicans—being turned down for medical care. The Associated Press reported that:

"Some [Mexican] patients suspected of having swine flu have said public hospitals turned them away or forced them to wait hours for treatment even after the [Mexican] government declared a national emergency."[Fear of Public Hospitals Aided Swine Flu, By John Rice, Associated Press, May 10th, 2009]

Another AP piece told of some ambulance workers refusing to pick up people with fever, and of patients being turned away by health workers. One patient reported actually being kicked out of an ambulance and another said he was rejected by two different hospitals: Some Mexican ill say doctors turned them away , Associated Press, April 27, 2009

As for foreigners in Mexico, there are disturbing anecdotes about them too:

Then there is this ironic incident which took place this year in Playa del Carmen, near Cancun. Here is the report from the Med Politics blog:

"A colleague of mine, who's been forced to deliver free medical care to thousands of Mexican migrants here in Virginia over the years (thanks to our laws), just returned home from a vacation trip to Playa Del Carmen, Mexico.

"After his 6 year old daughter got high fever and nuchal rigidity [neck stiffness], they went to a local hospital, concerned about meningitis. Guess what? The ER doc/hospital would not see her or get her admitted, unless the family deposited $800 in a credit card charge upfront.

"There are a number of arguments for why our medical system is eating so much money. But there is no doubt that one of the biggest causes is that we are supporting millions of people in our Emergency Rooms and wards, and they are from what is essentially a Third World nation". [A Mexican Welcome, Med Politics blog]

What's particularly ironic about the last incident is that this doctor, who had treated so many Mexican illegal aliens, did not receive reciprocal treatment in Mexico. But that's not surprising, is it?

Nevertheless, from the point of view of the Mexican medical personnel, what we had here was a refusal of services.

Mexican health care is a real mixed bag. Its quality varies greatly depending upon who is providing.

Mexico has a large private medical industry. Especially in urban areas, the upper class and even the Mexican middle class have access to affordable medical care and to pharmaceutical products that are much cheaper than north of the border. That's why some Americans today go south of the border for medical care and medicines. (And if Obamacare ever gets instituted, you can expect a whole lot more of that).

Private medical care in Mexico, however, is private—you have to pay for it. That's why private clinics and hospitals are so keen to demand payment.

The biggest is Seguro Social, which includes all private sector employees in the formal economy. That program is funded by the federal government, private employers and private employees, whose paychecks are deducted to contribute to the system

If you're not in the system, however, the IMSS can turn you down.

The Seguro Social hospitals are typically overcrowded. That may be their biggest problem. When I lived in Mexico, one of my wife's relatives had a punctured lung. She had to stay in the Emergency Room for several days, as there was no space in the regular rooms. We visited her there and the place reminded me of the hospital scene in Gone with the Wind.

So Seguro Social doesn't take un-enrolled patients for free, it has enough problems as it is. Don't expect to get treated for free in that system.

Mexican government employees have their own health insurance program, the oil monopoly PEMEX has its program, and the military has its program. None of these programs are free of charge to outsiders, so don't expect to get free care there. (I did once go as a patient to a Mexican military hospital, but paid for the privilege).

For Mexicans without health insurance, there's a new program called Seguro Popular. To join this program, you must pay for it, except for those under a certain income level, who get it for free. That program, however, is not designed for American tourists.

In 2006 the Mexican government began a new health plan for all babies born after a certain date, and in 2009 announced universal care for all pregnant women. So there's no need for them to come north and have anchor babies, now is there?

In addition, there are various medical facilities operated by charities and churches. Where I lived, the Lion's Club even operated a clinic, which wasn't very expensive.

When I was living in Mexico, one of my boys fell and cut his head on a swing. We took him to the Red Cross where they checked his head, cleaned the wound and put on a bandage. We offered to pay, but they did it for free. Thank you, Red Cross.

In the Mexican urban area in which I resided, there was a university hospital where medical students could practice on patients. It was quite inexpensive for the patients. I heard of a story there, though, in which a patient was unable to pay his bill and was kept in the facility, with his bill increasing by the day. I don't know how that situation finally ended up.

In the U.S., under current interpretation of the EMTALA law, emergency rooms are, for all practical purposes unable to turn anyone down, and can be slapped with a $50,000 fine for refusing treatment, even if the attending doctor determined a case was a non-emergency.

Interestingly enough, there is something similar to EMTALA in Mexican law—Article 36 of the Ley General de Salud. [Word Document] It stipulates that health care providers, public or private, must charge Mexicans in accordance with their socioeconomic level and even exempt them if they are unable to pay.

Bottom line: there is no effort in Mexico to reciprocate the care afforded to Mexicans in the U.S. by providing free care to Americans in Mexico. And there isn't going to be.

I plan to visit Mexico this Christmastime with my family. But believe me, I don't plan to intentionally injure myself and see if I can get free medical care, though I'm sure that would provide some good grist for a future VDARE.COM article.

In the meantime, I have a solution for the problem stateside. When illegal aliens show up for medical treatment, detain them, treat them, deport them, and send the bill to the Mexican government.