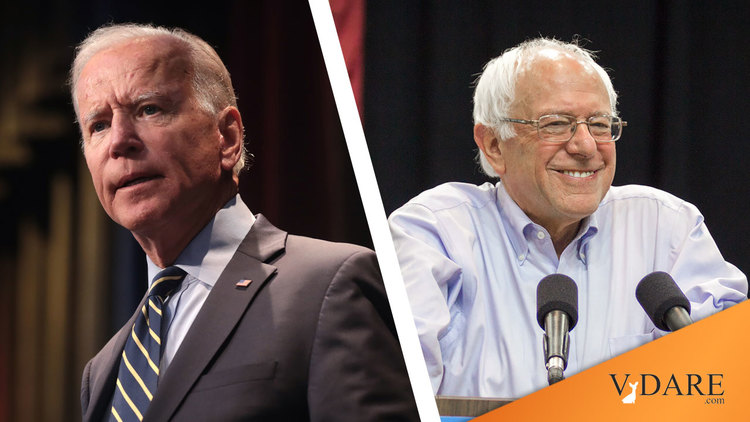 "We've got the president of the United States on our side," said Sen. Bernie Sanders Sunday on ABC's This Week.

The socialist senator from Vermont may be overly optimistic about how the party deadlock on Capitol Hill unfolds. But about the balance of forces inside the party, and the direction where it is headed, Sanders is probably not wrong.

President Joe Biden confirmed it by casting his lot with the liberal-left on the sequencing of the $1.2 trillion infrastructure bill and $3.5 trillion social safety net bill pending in Congress.

When Biden went to the Hill Friday, it was thought he was coming to rescue and liberate the Senate-passed infrastructure bill being held hostage by progressives until they got their way on the larger bill.

Progressives had threatened to sink the roads-and-bridges bill in Speaker Nancy Pelosi's House, unless they received solid assurances that both houses would simultaneously take up and approve the $3.5 trillion bill.

When Biden reached the Hill, however, he threw in with the hostage-takers. He asked for a delay in House passage of his own infrastructure bill, until the demands of the progressives were addressed and met.

Pelosi agreed and has put off any House vote on the infrastructure bill until the end of October.

Biden had ditched the Biden Democrats and cast his lot with Sanders & Co. Let's hold off voting on my own infrastructure bill, until we can also deliver what the progressives demand of us, he was saying.

The real impediment blocking progress, Biden said, was two senators, Joe Manchin and Kyrsten Sinema, who are blocking the resolution of the issue, which is that all Democrats should agree to enact both bills.

By capitulating to the progressives' demand—which translates to, "Both bills or no bill!"—Biden revealed where he thinks the power in the party resides, where the future is, and what he wants as his legacy.

This is not the first time Biden has moved left to accommodate a rising consensus. As vice president, though a self-proclaimed devout Catholic, Biden stepped out in front of Barack Obama to endorse same-sex marriage.

During the 2020 campaign, Biden abandoned a lifetime belief about abortion and pledged to remove the Hyde Amendment—a restriction on federal funding of abortions—from federal law.

Cradle Catholic Joe has become our most pro-abortion president.

But while the moderate-versus-progressive faceoff could still end in a rout for the left, the probability is that the infrastructure bill becomes law and the social safety net bill ends up between Manchin's $1.5 trillion ceiling and its current $3.5 trillion price tag.

One way to solve the sticker-price problem is through subterfuge—reduce the duration from, say, 10 years to five, in the expectation that no future GOP administration would terminate an entitlement program upon which millions of Americans had come to depend for half a decade.

As Milton Friedman reminded us, "Nothing is so permanent as a temporary government program."

Nevertheless, this is truly the "transformative" legislation that the New York Times depicted as providing "a cradle-to-grave reweaving of a social safety net."

This Build Back Better bill would provide family and medical leave for illness and the birth of a child, affordable child care during infancy, two years of universal pre-kindergarten, child credits and federal income tax credits, and two years in a community college.

If passed in its present form, government will have an ever-present role in the life of a child, almost from conception until his or her early 20s.

This would also include established programs of welfare, Medicaid, aid to education, subsidized housing, rent supplements, school breakfasts and lunches, and food stamps.

If this bill does not die in the fall, what will America look like a few years hence?

Government will have expanded in both size and the numbers of employees, and in relation to a shrinking private sector. A panoply of new programs will expand eternally with the cost growing inexorably. The dependency of U.S. citizens on their government will grow.

And this doesn't even touch upon another aspect.

The IRS is to be expanded, and corporate taxes, estate taxes and capital gains taxes are to rise. Government will also step in to force a shift away from coal and oil and gas, with which the country is hugely endowed, to wager America's future on solar and wind.

Hopefully, Manchin and Sinema will employ the leverage they have to prevent the worst of the damage this historically high level of spending—with inflation already rising above 5%—will do.

But as to whether the Democrats are a Bernie party or a Biden party, Joe settled that Friday with his capitulation.