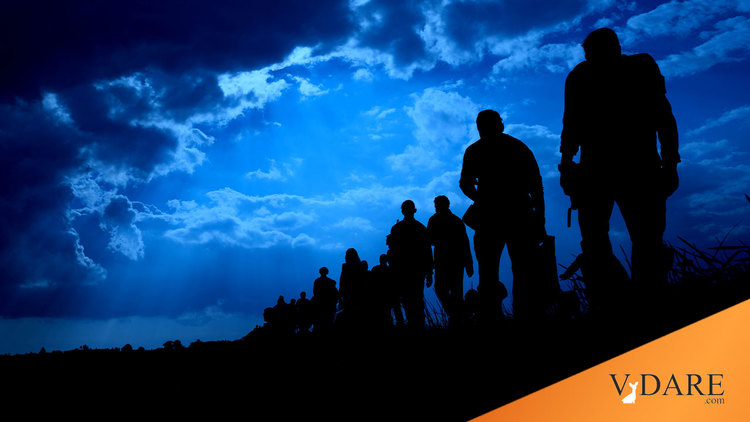 Made In Heaven (Or At Least Washington): The Refugee Industry And The Healthy Marriage Initiative

"How many of you are here today because of your faith?" one the keynote speakers shouted inspirationally at a Washington DC meeting of "refugee workers" that I sat in on recently.

The attendees came from organizations whose names suggested they belonged to one or other of the religions and denominations in America today.

Yet almost no hands went up in reply.

After a moment's silence, the speaker—apparently deciding his audience was from the militantly humanist wing of the refugee industry—asked in a louder voice: "How many are here because of deeply held humanitarian beliefs?"

After an embarrassed silence, the speaker had to move on to another topic.

Why did this happen?

Because the moving force in the refugee industry is the money. The refugee workers go where they find it.

There are some radical levelers working in the field, who won't be satisfied until every good and every woe known to mankind is evenly distributed.

But, although quite active, this group is fortunately small. Most "refugee workers" are in the business because it provides a paying job, for some a very well-paying job.

Not that money is necessarily bad. After all, market forces could play a useful role in the non-profit world—at least, they could if the sources of the non-profits' funds were private.

It's not hard to imagine. With the help of an active media, involved private donors would see how their money is used and direct their giving to causes they deem worthy. Fraudulent and ineffective charities, deprived of their resources, would be forced to cut back.

But the U.S. refugee industry is made possible by the (largely unwitting) American taxpayer. Its policies are the work of employees of the federal government, congressional committees, government-dependent NGO's and the U.N.

There's no market-type feedback if the pay is coming from the government. Why should the government relinquish its role and eliminate its own programs?

This co-dependant "iron triangle" relationship of government and the creatures of government is classically illustrated in the refugee resettlement industry.

Oh, the problems we'll solve. Even the stubborn reluctance of African Americans to embrace refugees from Africa will melt in the flood of government handouts. In the words of Federal Office of Refugee Resettlement (ORR) Director Nguyen Van Hanh:

"The potential assistance to African refugees by African American communities is an interesting issue. There may be some constraints and problems in this area, but it has occurred to me that there are many African American churches and faith-based organizations with social concerns and programs. Now that faith based organizations will be able to apply for grants, I hope this may provide the impetus and vehicle for such assistance." (from a speech given May 12, 2003)

Translation: give American blacks more money and they too will go along.

Moreover, according to Dr. Hanh the ORR is "inviting service proposals from faith-based and community-based organizations."

To get a sense of the problem consider that these are just a few of the things for which ORR Director Van Hanh specified, in a recent speech, the CBOs should be actively seeking hand-outs:

Wait a minute! Did he really say "healthy marriage education" for refugees?

Yes, indeed he did. It turns out that all you have to do is click here and do a PDF 'find' on 'refugee' for your chance at $1.7 million in grant money to encourage healthy marriages for refugees.

Believe it or not: while the Bush Administration hasn't even begun to hand out the $1.5 billion dollars in "marriage money" envisaged in its 2002 welfare overhaul, the refugee industry is already planning to hire full-time workers to manage it all!

Perhaps there really is "evolutionarily-selected behavior" on the part of institutions like the federal government. Obviously, for Leviathan as an organism, with a selfish interest in its own growth, it makes perfect sense to bring in more families that will be dependent—and then to destroy intact American families by making them pay for it.

Soon we may all be needing federal training programs in "techniques for self-protection."

The other day, I asked one refugee industry staffer how they were coping with the widely publicized "layoffs" that have come with the temporary downturn in refugee admissions.

But, according to her, there were no layoffs at her New Jersey agency.

Her agency was increasing staff because government "trafficking" money was coming in. This funding is available due to the increase in human trafficking, including sex trafficking and human slavery being imported into the United States.

Doubtless there will soon be "unaccompanied child" money and more "marriage" money too.

Seemingly, only federal grants for space research are off limits to the refugee industry.

Worried that the money pouring into the NGOs will be used to lobby for, well, more money for the NGOs?

How about this self-revealing warning from the U.S. Catholic Conference of Bishops:

"[W]ages paid for time spent advocating with congressional representatives for federal appropriations to support refugee admissions and domestic services should be charged to diocesan funding sources other than those awarded from federal grants, including funds passed through by USCCB, i.e., R&P, Cuban/Haitian, Match Grant, INS children's programs or any other government-supported refugee programs and services." (My emphasis.)

Translation: the congregation's donations go to lobbying the government. Obviously the bishops realize that taxpayer money could be used. So they want to make it plain that parishioners must pay to lobby the government. Of course, money is fungible—and the bottom line is the same: the taxpayer gets stuck with the bill.

Media coverage of the Great Refugee Ripoff is scanty, inaccurate and misleading.

In the past, the paper has divided this purported annual cost by the average number of entrants arriving each year, coming up with a not-so-scary cost per refugee of $7,000. The paper has even suggested this sum could be offered to the refugees as "freedom loans." Yet:

The article neglects to note that we can't even get refugees and their "sponsors" to repay their small interest-free transportation loans.

Its estimate for the cost of refugee arrival excludes the largest cost component of the refugee resettlement program—ongoing welfare costs. Including the welfare cost drives the annual total up by a factor of at least 10.

This doesn't include the new "marriage money" and many other federal grant programs.

One leader of a tribal group resettling in America recently expressed the desire to settle in Washington, DC.

His explanation: being in the nation's Capitol means more protection and proximity to the good things the government has to give away.

At least someone has figured out how the system works!

Thomas Allen (email him) is a recovering refugee worker