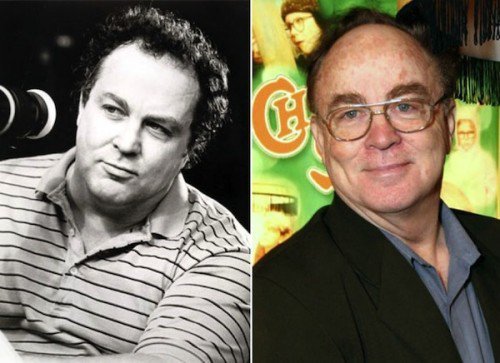 LAPD: "We Don't Get Into" Immigration Status Of Christmas Story Director's Killer

At 2:30 a.m. on Wednesday, April 4, Bob Clark, the 67-year-old director of the Christmas movie classic A Christmas Story, and his 24-year-old son Ariel Hanrath-Clark, were killed when the Infiniti that Clark was driving was hit head on—by a drunk, unlicensed driver in a GMC Yukon driving in the wrong lane.

An AP story on the incident reported that "the driver of the other vehicle, Hector Velazquez-Nava, 24, of Los Angeles … will be booked for investigation of 'gross vehicular manslaughter' after being treated" for minor injuries at UCLA Medical Center, according to LAPD spokesman, Lt. Paul Vernon.

The AP story quoted Lt. Vernon as saying: "The initial investigation has concluded that Nava was driving without a license northbound in the southbound lanes while under the influence of an alcoholic beverage." [A Christmas Story' director, son killed in L.A. car crash, By Jeremiah Marquez, April 4, 2007]

At the LAPD Media Relations Section, an Officer Hurty told me, "I think blood was drawn" from Velazquez-Nava, but that "we don't [have a blood alcohol level on him]," and "that's going to be part of evidence used in court" so "we don't want [unclear] releasing that."

And, I asked, do you know anything about [Velazquez-Nava's] immigration status? "No, we don't."

Do you plan on …, "No, we don't get into that." (Officer Hurty anticipated my question on immigration status; she must get a lot of that.)

[VDARE .COM note: See tonight's TL: A reader who emailed the LA Times found that, surprisingly, they were willing to look into Velazquez-Nava's status, but said that police might withhold the information.]

Let's see. A man with a Spanish name and no driver's license is so blasted that he drives into incoming traffic, kills two American citizens and almost kills his female companion.

What are the odds that he is a legal resident or American citizen?

Maybe it's time that the LAPD "got into that".

But the LAPD still enforces Special Order 40, the 1979 illegal ordinance instituted by the LA Police Commission and signed by then Chief Daryl Gates requiring that police officers not inquire into people's immigration status.

Thanks to S.O. 40, much of LA is today under the control of murderous illegal immigrant gangs and Los Angeles last year suffered 269 gang-related murders.

But, as Bratton [email him] has to know perfectly well, his sanctuary policies have emasculated the police and ceded sovereignty to the Hispanic gangs. So no illegals report crimes and bear witness against the gangs anyway—because they know that doing so will guarantee their death and the deaths of their loved ones.

And Bratton's own officers have for years complained about seeing known illegal immigrant gang-bangers on the streets but not being able to do anything until the gang-banger commits additional crimes, such as murdering someone.

Such a handcuffing of the police, which has no legal basis, is at the root not only of the LAPD's years-long impotence in solving murders, but of its role in enabling murderers to kill people in the first place. A sane policy would permit police to stop all known gang members on sight, make them show identification proving that they are legal residents or U.S. citizens, and detain them if they fail to do so.

(Identifying them is child's play. Gang members make it their business to identify themselves via gang tattoos, gang signs, and gang "tags" that they paint on private property in acts of vandalism.)

A video blog on Special Order 40 produced and posted last July 30 by the folks at Full Disclosure contains interviews held with current and former LAPD officials over the past few years. In one interview, host Leslie Dutton asks a uniformed LAPD official, "Why don't you enforce immigration laws?"

"Well, I think it's a basic human right. ["It" apparently refers to breaking America's immigration laws.] And what we've looked at in terms of the immigration status of somebody is that we have a tremendous melting pot in the City of Los Angeles and we recognize that there are a number of basic social issues that come to bear as a result of a number of people coming from a number of different nations, and as a result of that type of melting pot of atmosphere that we've seen in the City of Los Angeles, the city fathers, [E mail Mayor Villaraigosa] the City Council, our Police Commission has taken the attitude that what we want to do is provide services to everybody in the community, regardless of their undocumented status, and unless they break the law, we're not going to report things to INS. Where it's just the sole status of them being here illegally, we don't take that into consideration when we're enforcing the law."

Since when do uniformed police officers, who have taken an oath to enforce the laws of the United States, get to speak the foreign language of "human rights," and openly say that they will refuse to enforce the nation's laws?

It would have been one thing if the LAPD officer had simply said: "The politicians have ordered us not to enforce America's immigration laws, so the matter is out of our hands."  But instead we get this shameless "human rights" sophistry.

Just imagine how far an American citizen would get with the same LAPD if he said he refused to follow written statutes because they violated his "human rights."

But, as Officer Hurty's response to me shows, the LAPD does not even follow its own pathetic guidelines. Even after the LAPD announced that Hector Velazquez-Nava was indeed guilty of crimes—of driving without a license, of reckless driving, of driving "while under the influence of an alcoholic beverage"—and that the Department will "book [him] for investigation of 'gross vehicular manslaughter'" once he is ready to be released from the hospital, it still has no interest in determining his immigration status.

As the Clark family just learned, the impact of illegal immigrant crime is not limited to gangs—or even to illegal entry to the country, illegally working, illegally driving or tax fraud. VDARE.COM's Brenda Walker has shown that Hispanic men in the American Southwest (anywhere from 25 to 50 percent of whom are illegal immigrants) get arrested for drunk driving in proportions dwarfing the rest of the population—an almost four-to-one ratio in Austin, TX—but Hispanic men are much more often arrested in a condition of "extreme drunkenness".

Walker quoted "Assistant Dean at the University of Texas School of Public Health in Dallas Raul Caetano [who] put it this way, 'The profile of a drunk driver in California is a young Hispanic male, and I bet you have a similar situation all over the Southwest.'" [Diversity Is Strength! It's Also…Drunk Driving]

"America's highways are becoming far more dangerous because of cultural differences-unassimilated foreigners who believe that knocking down 10 beers before hitting the road is no problema. And drunk driving is an accepted behavior among Mexicans in particular."

The appalling truth is this: Due to President George W. Bush's national sanctuary/open borders/merge-with-Mexico policy, probably more Americans have been killed by illegal immigrants in America than by insurgents in Iraq.

Isn't that the LAPD's job, too?