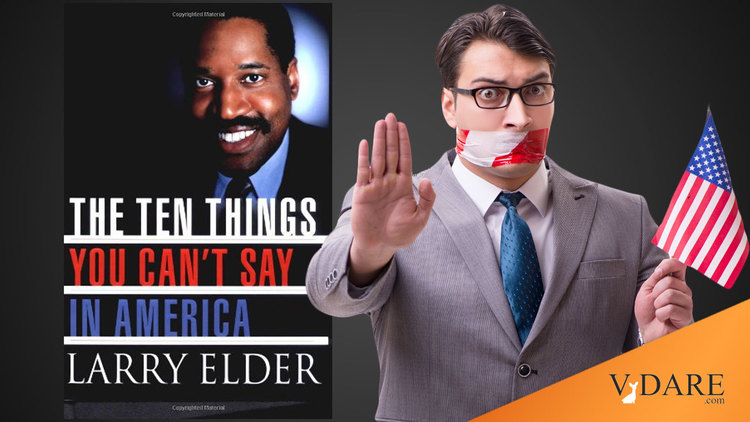 Things Even Larry Elder Can't Say (Immigration Is One)

[Peter Brimelow writes: Dan Seligman is one of the most distinguished journalists in the U.S., with a long career at Time Inc. and now at Forbes, plus he's always been prepared to say the unsayable, an almost unique combination.  His 1992 book A Question of Intelligence: The IQ Debate in America brilliantly and lucidly presaged the Great Bell Curve Wars. We are delighted to welcome him to VDARE.]

There are many things you can't say in America. And then there are things you really can't say. Not even in a book called The Ten Things You Can't Say in America  recently perched in the nine-spot on the New York Times non-fiction best-seller list.

The book, by Larry Elder, is in most dimensions a great read. Elder, a talk-show host in Los Angeles radioland, is obviously a smart, sensible guy with a nose for sniffing out politically correct nonsense and a breezy writing style that works well against the silliness he's elaborating. His own politics are libertarian and his book is often funny—not an easy double play to pull off. Arguably relevant, given the recurrence of race-related themes in his "ten things," is his race. The face on the St. Martins Press dust jacket shows a cheerful-looking black man who appears to be around 40. The adjacent text adds that he "tells truths this nation's public figures are afraid to address." But that's only partly true.

Elder's book has ten chapters, one for each allegedly unsayable thing. Some of the chapters truly deal with politically sensitive stuff, but others are merely mildly controversial. Reading the book, I found myself imagining a rating system for "can't say" propositions — a system that would gauge the amount of flak one would expect to take for endorsing this or that politically incorrect thought. If the flak is guaranteed to be heavy, resulting in social obloquy and maybe even career jeopardy, we rate it a 10. If it's light, resulting merely in dinner-table arguments with your liberal friends, it rates a 1. So, as with the all too familiar scale for rating feminine pulchritude, our range is from 1 to 10. (Use of the pulchritude scale is itself a 10, but that's another issue.)

[1] Blacks are more racist than whites. Drawing examples from the O.J. Simpson trial coverage and interracial crime data generally, Elder makes a persuasive case for this proposition, effectively ridiculing media efforts to ignore the prevalence of anti-white sentiments among blacks. The media's behavior is itself evidence that flak ratings are high for this proposition. I give it a 9.

[2] White condescension to blacks is no less damaging than black racism. The "condescension" he's talking about typically takes the form of guilt-ridden whites holding blacks to lower standards—of courtesy, work performance, educational standards—than would normally be expected. There's no doubt that this behavior works to poison race relations, also no doubt that it's unmentionable. Despite some problems here with Elder's analysis (see below), I give him another 9.

[3] The media have a liberal bias. Well, yeah, but it's ludicrous to argue that this is a proposition you cannot broach in America. People say it all the time, even on the tube. I give Elder a grudging 1.

[4] The glass ceiling has a lot of holes in it. In other words, Elder argues, irrational discrimination has very little to do with the paucity of women among senior executives. What has a lot to do with it is the fact that, for all kinds of good reasons, women are far less careerist than men. It really was hard to say this in any kind of public setting in the early Seventies, but the dialog has since come a long way, baby, and I have trouble giving the author more than 2.

[5] The big social problem is illegitimacy - not discrimination, not crime-ridden neighborhoods, not bad schools, but fatherless families. Elder's argument is by now familiar, but, still, it remains super-sensitive, so I give him a 6 for this one.

[6] There's no health-care crisis. I incline to agree with Elder but have great difficulty seeing either side of this tired argument as too controversial to talk about. Another 1.

[7] The welfare-driven "nanny state" does more harm than good. Elder's chapter on welfare sprawls all over the place, with arguments about the perverse incentives built into welfare systems, about too-high tax rates, about the unintended consequences of government mandates, and quite a lot more—and Milton Friedman would have been burned at the stake years ago if any of this was really unmentionable. Still another 1.

[8] Republicans and Democrats—there really is a difference. Yes, there are all sorts of differences, but in toting them up, Elder is clearly padding out his book and forgetting its title. Another 1.

[9] We're losing the war against drugs, and ought to legalize them. In the circles I travel in, one takes more flak for defending the war than for demanding legalization. The refrain becomes monotonous, but it's 1 again, and a case could be made for 0.

[10] Gun control is a fraud, and Elder makes a powerful argument for gun ownership as a reasonable defensive measure in a high-crime world. To be sure, it is hard to argue that nobody else is saying this out loud. To also be sure, you will get screamed at by many of my own friends for making the argument. So, okay, a generous 4.

It's weird. Of the ten things deemed unmentionable by Elder, at least six are staples of our public dialog.

Elder completely ignores immigration reform, a staple that has been forcibly removed from our public dialog by tacit agreement between the establishment parties and media (which is why we have VDARE). Weirder still, he does not allow himself to get within shouting distance of one idea that every educated person has been exposed to—and that obviously also rates a 10. The thing you really can't say: Blacks, on average, are less intelligent than whites, and there is every reason to believe that the difference has some genetic component to it.

The survey data suggest that many, apparently most, scholars would endorse that proposition. On the Wechsler Adult Intelligence Scale, where the standard deviation is 15 points, the black average is around 85, the white average around 100. On the Scholastic Assessment Test, middle-class black kids with college-educated parents score lower than white kids from working-class families.

Yet it reliably generates hysteria when given public airings—as evidenced most recently in the witch-hunt against student Michael Polignano at Emory University in Atlanta. Michael produced an editorial in the student newspaper alluding to the black-white differences in general intelligence. This triggered an incredible open letter by Emory President William M. Chace, acknowledging that he himself had no special expertise in any such studies, but nevertheless demanding that "the faculties of psychology, sociology, genetics, political science, anthropology and all others at Emory"—presumably this includes geology and romance languages—join in a response. Concluding the open letter, Chace writes: "Michael, welcome to the Emory community, for you are about to discover of what it is made."

It is not clear, as I write, how this drama will play out, and whether President Chace will have a nervous breakdown when some members of the community—surely some are up to the task—tell him that the offending student's editorial is factually sustainable.

But if he doesn't, they better not tell him about immigration reform!