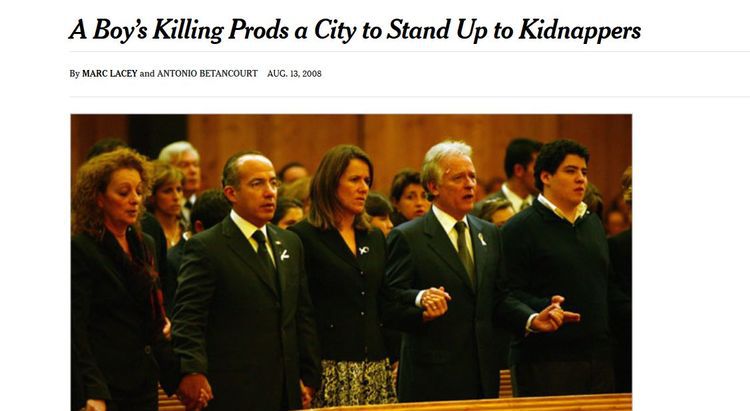 Kidnapping—A Job Americans Won't Do (But Mexicans Will)

It's one ugly picture when the elected government of even a shabby democracy cannot put down a bunch of criminals using its army, with 40,000 troops now deployed.

Behind closed doors, elites from Mexico City to Washington must be increasingly nervous about the failure of Presidente Felipe Calderon's military offensive of more than a year's length against the drug cartels. The $1.4 billion Merida Initiative of crime-fighting goodies for Mexico was one indication of Congress' fear of a failed state next door—think Colombia with a dash of Somalia added. Americans must pay attention to the country-sized crack-house on our southern border.

Calderon had made public safety a major issue in his presidential campaign. There is widespread fear of crime among average Mexicans.

But the bodies are piling up and the crimes are becoming more brazen. The death toll in Juarez alone is over 800 this year. High-ranking police have been assassinated by the cartels. Others have fled to the US, pleading for asylum.

If there is any sign of success in Mexico's battle against the chaos of gangocracy, I don't see it. In fact, a high-ranking official in the attorney general's office resigned earlier this summer over poor performance in the efforts against the cartels.

The Mexican elite has clung to weak criminal punishment in a stubborn attempt to act more like permissive Europe and less like the despised Americans, who are seen as being too tough on crime. But there are indications that ordinary Mexicans, who face more dangerous streets, would be perfectly happy with tougher sentencing, as well as better policing. (A stunning 97 percent of crimes go unsolved.)

Any realistic crackdown on crime would include an array of punishments that might actually deter criminals—long stretches in the slammer, with the option of life in prison for the worst offenses. But Mexico is noticeably slow on the uptake about the relationship between crime and punishment.

Kidnappings are up 9.1 percent in the first five months of this year. The June kidnapping and subsequent murder of Fernando Marti, the 14-year-old son of wealthy businessman, appears to have focused Mexican public attention more than the border carnage.

It was an awful crime by any measure. The boy had been snatched when the armored vehicle in which he was riding was apparently stopped at a police checkpoint. The two bodyguards were ordered out and taken away. The driver was tortured to death, with all of his teeth pulled out, and the other guard was choked, left for dead, but survived and has provided important information. The Marti family quietly paid $2 million dollars in ransom. But when two months of waiting failed, they turned to the press and openly advertised a larger amount for Fernando's safe release.

It was not to be. The boy's body was found stuffed in a trunk August 1. He had been dead for at least a month. The traumatic crime was worsened in the public mind by the fact that some of those arrested so far are police officers. The growing distrust of police has caused kidnap victim families to turn to authorities last.

"An entire industry, much of it unregulated, has grown up around kidnapping, with consultants to negotiate the ransom, insurance policies to cover any ransom losses and an array of safety measures, available to those who can pay, from bodyguards with military backgrounds to bulletproofing on cars and clothing.

Given the involvement of some wayward officers in the kidnapping trade, it is easy to see why victims' relatives look outside police forces in trying to bring such nightmares to an end." [A Boy's Killing Prods a City to Stand Up to Kidnappers, By Marc Lacey And Antonio Betancourt,  New York Times, August 14, 2008]

A significant indicator of desperation was Calderon's suggestion that punishment be stiffened after this crime. [Mexico: President Seeks Tougher Kidnapping Penalties, Reuters, August 7, 2008].

Mexico's problem is not just the worsening crime; it is the public losing trust that the government is acting to protect its basic safety. This is the mechanism by which civil society fails.

The wealthy have more choices, of course:

"A business leader who survived a kidnapping and asked not to be named told TIME: 'What are we to do? Get the Israelis as bodyguards? Somebody else was mentioning using American Special Forces, as they are being demobilized and are more serious. Do we have to have our own paramilitary forces? We have to be organized, as the government obviously is not. I am sending my family to the U.S.' His sentiments are common in gatherings of the wealthy, where options under discussion range from emigration to buying a smaller house and less ostentatious car—and, of course, investing more heavily in private security." [No Help for Mexico's Kidnapping Surge, Time Magazine, August 08, 2008]

Nice that this "business leader" has faith in the United States to keep his family safe.

Of course, our police are mostly top notch—not like those crooks with badges in Mexico.

But a law-respecting society is built upon the shared responsibility of citizens, not merely a dependence on police to make law and order work. And you have to wonder at what point the Mexican Way of Crime will become fully ensconced at the same level here—simply because so many Mexicans now live in the U.S. When tens of millions of Mexicans "move" en masse to America, the whole cultural package arrives. And that includes crime. The idea that "good" Mexicans can be protected from "bad" ones has its limits.

It's already happening. Rich Mexicans (and anyone else) living in the United States are sparkly lures to people snatchers, both expert and beginners. As noted earlier in VDARE.com, Mexican-style kidnapping has arrived. In San Diego, a Mexican businessman was grabbed and held for money by a several men. In Florida last year, 13-year-old Clay Moore was kidnapped from a school bus stop by one Mexican, but managed to escape using his ingenuity.

"TIJUANA, Mexico (Reuters) - American businesswoman Veronica was stepping out of her car in California when two men forced her into the passenger seat at gunpoint, pushed her teenage daughter into the back and drove them into Mexico.

"Taking advantage of lax Mexican security at the San Diego border, and with U.S. authorities focused mainly on those entering the United States, the kidnappers took the two women to Tijuana in January and held them for a month before their family paid a $100,000 ransom. [...]

"Several Americans have also been kidnapped in Texas this year and held for ransom in Mexico, the FBI said."

We already know that Mexican organized crime is here in America and has replaced Colombia as the major drug trafficker in the hemisphere, to the point where at least 195 American cities have Mexican cartels operating in them. There's every reason to assume that the narco-criminals are expanding their portfolios to other money-making pursuits in which they have expertise—namely, kidnapping.

"[Independent consultant Georgina] Sanchez said kidnapping in the United States could be particularly attractive to the cartels because they may be able to demand more money than they do in Mexico.

"'The US will begin to see a little of the same conflict that is happening in Mexico,' Sanchez said. 'If [the cartels] already have methods, and ways of diversifying into other crimes, it's normal that they won't stop at the border.'" [Mexican drug cartels now doing business on US soil, Boston Globe, August 3, 2008]

The big question: Why isn't Washington doing something about the threat posed by Mexican anarchy?

Or perhaps a better question is: Why don't policies correspond to the real danger?

Among elite law enforcement and government policy makers, there is plenty of the "partnering" transnational philosophy of policing.

But common sense tells us to lock our own front door before cleaning out the crack house across town.

Our sovereign borders should be our first line of defense against a world of diverse criminals.

Job #1 for Washington should be: crime prevention—by keeping out the bad guys.

Brenda Walker (email her) lives in Northern California and publishes two websites, LimitsToGrowth.org and ImmigrationsHumanCost.org. Her favorite part of the Olympics has been the Great Wall of China.