John Derbyshire: Then They Came For Amy Wax (Again). America’s Cultural Revolution Is Speeding Up.

Amy Wax, a tenured Professor of Law at the University of Pennsylvania is now being subjected to a SECOND Two Minutes Hate by our Emerging Totalitarian Left. I should say—having some slight acquaintance with the lady—that Professor Wax is a formidable person to take on in combat, not only intellectually but also in personality. I classify her in my own mind with those feisty Jewish women in the Old Testament. I doubt Professor Wax has ever decapitated anyone, as Judith did, or hammered a tent-pin through anyone's skull like Jael, but if you're looking for a fight, she'll give you one. A lot of people went looking for a fight after Wax, jointly with Professor Lawrence Alexander of the University of San Diego, published an op-ed in the Philadelphia Inquirer last August [Paying the price for breakdown of the country’s bourgeois culture, August 9, 2017]. In the op-ed Wax and Alexander spoke in favor of bourgeois values: get married, stay married, raise kids, get as much education as you can take, work hard, be patriotic, and so on.

That led to shrieking and swooning among Goodthinkers everywhere. The authors, it was said, were calling for the restoration of Jim Crow, for women to get back in the kitchen, for homosexuals to be jailed, and so on. I covered the hysteria in my August 18th and September 1st podcasts. 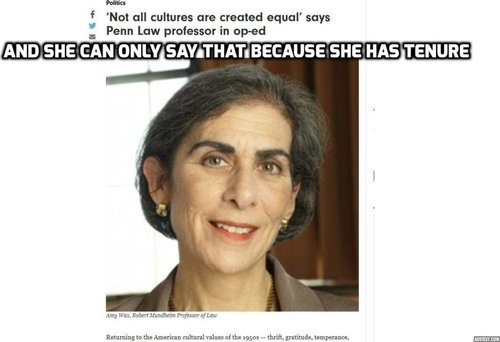 I concluded the latter of those podcasts with the prediction that the administrators at U. Penn. law school would cave to the witch-hunters. Professor Wax, being tenured, can't be fired, but I thought she would lose some of her classes. It was an easy call. The administrators at our colleges and universities are bred on a ranch hidden somewhere in the mountain West to be exceptionally compliant with Cultural Marxist orthodoxy, and to have no spinal matter at all.

In this case, however, I underestimated Professor Wax. She returned all the obloquy with courage and spirit, and held on stubbornly to her classes.

Forward to the present. Now the lady is in trouble again. After last August's kerfuffle she did one of those Bloggingheads interviews with Economics Professor Glenn Loury, a black guy, from Brown University … or possibly a brown guy from Black University: it's hard to keep these things straight.

This was last August [Glenn Loury (Brown University) and Amy Wax (Race, Wrongs, and Remedies, University of Pennsylvania) , , BloggingHeads, August 29, 2017]. The two professors discussed, in a not-particularly-controversial way, the under-performance of blacks at law school. Professor Wax said, amongst other things: "I don't think I've ever seen a black student graduate in the top quarter of the class, and rarely, rarely in the top half"

A few days ago, some witch-hunters dug up this Bloggingheads exchange from last year. More shrieking and swooning. The dean of Penn. Law school, an invertebrate named Ted Ruger, [Email him] flatly contradicted Professor Wax: "Black students have graduated in the top of the class at Penn Law” [Amy Wax removed from teaching required first year courses at Penn Law School,  By Paul Campos, Lawyers, Guns & Money, March 13, 2018]. He did not, however, provide any evidence for his assertion, nor any definition of his term "top of the class."

The Dean was actually puffing out this squid ink from behind a high protective wall of administrative protocol. The actual performance of different races at U. Penn Law is a closely-guarded secret.

Hence, for making a factual statement based on her own experience, a statement no-one has produced facts to contradict, Professor Wax is now undergoing her second Two Minutes Hate. And this time she has actually suffered academic consequences. Dean Ruger, fortified by an ingredient originally found in jellyfish, has had her removed from her duties teaching first-year students.

Since Dean Ruger has called Professor Wax a liar in print, and dishonored her by removing her first-year class, some of Professor Wax's friends have suggested she file a grievance with the American Association of University Professors. Whether such a filing would come to any conclusive result is uncertain. But there would likely be one of those processes lawyers call "discovery," in which the law school would have to open its files on student achievement by race.

Then we'd know who was telling the truth about black students … as if we don't know already. That Professor Wax should be hounded like this for some simple observations of fact, tells you how deep our academic culture has sunk. The lady is not even, to the best of my knowledge, a race realist. She was at any rate not a race realist eight years ago: I can state that with some authority.

Within the larger sphere of jurisprudence there is a specialty area called the Law of Remedies. Suppose I hit you with my car and break both your legs. Now you're on crutches. The law—the Law of Remedies—says I have to recompense you: Pay your medical bills, lost wages, and so on.

There comes a point, however, when I have discharged my obligations under the Law of Remedies. If you are still on crutches at that point, it's now up to you to put forth some effort and get walking again. I am no longer under any obligation; I can go about my own business.

Professor Wax's 2009 book made an analogy with the situation of blacks in today's America. What can reasonably be done to atone for past cruelty and injustice, she argued, has been done. Now blacks have to put forth some effort and get off their crutches, if they are to attain statistical parity with other races in America.

The book is thoughtful, literate, and rigorously argued, as you'd expect from someone whose IQ is very likely a four-digit number. It caused much unhappiness at U. Penn law school, though. Professor Wax was called to a meeting of the Black Law Students' Association to explain herself.

At the meeting, Professor Wax gave as good as she got, so the offended parties left dissatisfied. They called for a bigger event: a public debate between Professor Wax and some black legal academics. They chivalrously allowed that Professor Wax might have someone to second her on the debate platform.

It happened that I had published my book We Are Doomed at the same time Professor Wax published hers. She had read my book and emailed me about it. We had exchanged a few more emails in a spirit of friendly discussion.

So when this platform debate in front of the Black Law Students' Association was being arranged, Professor Wax suggested they invite me in to be her second. The Association emailed me with an invite.

I emailed back, explaining my own opinions as a race realist: Contra Professor Wax, I don't think blacks can attain statistical parity with other races, however much effort they put forth. Biology makes it impossible.

The black law students, to their credit, invited me anyway. I went down to Philly, gave a ten-minute address, fielded Q&A, and socialized with Professor Wax and the black law students afterwards. The whole thing, including my address, can be read on my website johnderbyshire.com. See    Revisiting Race and Remedies: Should the Government Play A Role in Eliminating Racial Disparities in Education and Employment? dated April 5th, 2010.

As can be seen from that transcript, I gave them straight race realism on the rocks. Again to their credit, I was received cordially and thoughtfully, confirming Jared Taylor's observation that blacks, or some large subset of them, are fascinated to hear a white person speak honestly about race.

Why wouldn't they be? Things that are extremely rare are naturally fascinating.

The only discordant note was one of the audience members, a black guy, telling me my views were "old." I was of course much too polite to riposte that belief in the sphericity of the Earth is even older—around twenty-six hundred years old—but is generally held to be true notwithstanding.

That was eight years ago, before the Antifa got themselves organized.

My views, which I explained very frankly to the Black Law Students' Association beforehand, and which did not deter them from inviting me, have not changed. It is a measure of how fast our Cultural Revolution is proceeding that such acceptance would be unthinkable now; or that, if somehow I were invited to speak, I would be able to make myself heard above the Antifa chanting and the sound of breaking glass.

I offer my sympathies to Professor Wax in her current travails.

And I hope that one day sanity and respect for reasoned discourse will be restored to our universities and law schools.

It's a dwindling hope. But I hope it anyway.