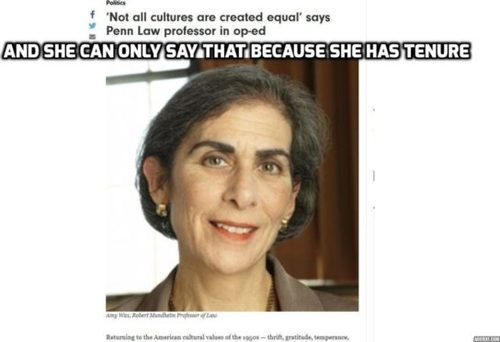 I'm going to go out on a limb here and argue that the campaign against Professor Amy Wax at U. Penn. (detailed here and here) may end up as a net plus for race realism.

The original Wax-Alexander op-ed in the Philadelphia Inquirer [Paying the price for breakdown of the country’s bourgeois culture,August 9, 2017 ] was perfectly culturist, with not a hint of race realism. (Likewise, by the way, Heather Mac Donald's defenses of it.) All the social outcomes under discussion were caused by culture, culture, culture — this wonderful all-explanatory thing called culture.

That didn't do the authors a bit of good; they're being called "bigots" and "white supremacists" anyway. If not for the fact that Prof. Wax is Jewish, I have no doubt she'd have been called a "Nazi" by now. Perhaps she has been and I just missed it.

After a couple more episodes like this, some other Amy Wax or Larry Alexander or Heather Mac Donald — some credentialed adult with access to mainstream outlets, perhaps one of those actual names — will figure he might as well be hung for a sheep as a lamb, and serve the cause of Truth.

If you're anyway going to be called a "white supremacist" and have your windows broken, you may as well drop the culturist flim-flam and go straight to race realism.

At this point everyone outside the crazy white left — the baizuo — everyone with half a brain knows that there are innate, intractable statistical differences between the races in behavior, intelligence, and personality: big differences between black Africans and the out-of-Africa races, smaller differences among those races.

Pretending not to know that is just a social courtesy practiced to avoid hurting the feelings of persons too dimwitted to grasp sophisticated statistical concepts like "average" and "variation."

Or possibly, in the case of gentle souls like Prof. Wax and Ms. Mac Donald (I've had no personal acquaintance with Prof. Alexander), it's a case of knowing but not knowing that you know. This is a phenomenon familiar to anyone acquainted with neuroscience: google "blindsight."

Persons with blindsight can see things, but don't know that they're seeing them. They can navigate across a room, avoiding the furniture; but if you ask them, they'll tell you they can't see a thing. Their eyes are working and getting data to the motor control centers of the brain, but it's not being passed on to the conscious executive centers.

Whatever: If the social price of race realism is no higher than the price for mild culturism like that of Wax and Alexander — if every position not straight-ticket Cultural Marxism is Nazi — well, heck, you may as well say out loud what every sane person knows, at some level, to be true.

Sooner or later all this careful culturist side-stepping, and this see-no-biology, hear-no-biology, speak-no-biology in commentary on social issues — sooner or later someone of authority and status is going to say the hell with it, let's talk honestly about the race differences we all know are contributing to some of our social problems.

Professor Wax, in fact, with her background in microbiology and neuroscience, might just be the person to do it.