Abroad, a week of elections. I counted three, each one interesting in an immigration patriot way:

On October 22,  the Czechs had an election   in their country, which so far as I am concerned is Czechia. This was a parliamentary election, to select members of the national legislature. The Czech head of state, the President, is elected separately, on a different schedule—next time, this coming January.

The current President, by the way—the one up for re-election in January—is the very same guy, name of Miloš Zeman, whose 2015 Christmas message to his people I quoted at the time: a stirring affirmation of national sovereignty and demographic stability after the great European immigration crisis of that summer.

To close my Christmas message, I would like to tell you two clear sentences:

Well, that was the President, who is up for re-election in January. Meanwhile, last Sunday's elections to the Czech parliament turned the country's political system upside down.

Sunday's winner was the Trumpish ANO Party, which was only founded five years ago—impressive, even allowing for the fact that the modern nation of Czechia is itself only 24 years old.

"Ano" means "yes" in the Czech language, and it's also an acronym for "Action of Dissatisfied Citizens" in that language. So plainly there are a lot of dissatisfied citizens over there. 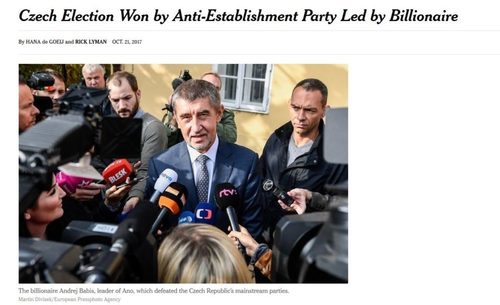 What they're dissatisfied with, like so many people elsewhere: their political establishment. Leader of the ANO party is Andrej Babiš, a billionaire businessman.

I will not accept refugee quotas [for Czechia] … We must react to the needs and fears of the citizens of our country. We must guarantee the security of Czech citizens. Even if we are punished by sanctions.

Dissatisfied Czechs seek a solution to their dissatisfaction in Trumpish nationalism. They were already pretty darn nationalist, as President Zeman's 2015 Christmas message showed. Czechia belongs to the Visegrád Group of East European countries, along with Poland, Hungary, and Slovakia, with Austria hovering on the edge of joining them after this month's election. The Visegrád group like the economic aspects of European co-operation—but very much dis-like the EU's policies of mass Third World immigration. Well, now the Czechs have taken a step further away from globalism and open borders.

Yes, stuff is happening in Europe, and the political Establishment is on the run. Good luck to the Czechs with their new parliament; and good luck to President Zeman in January. 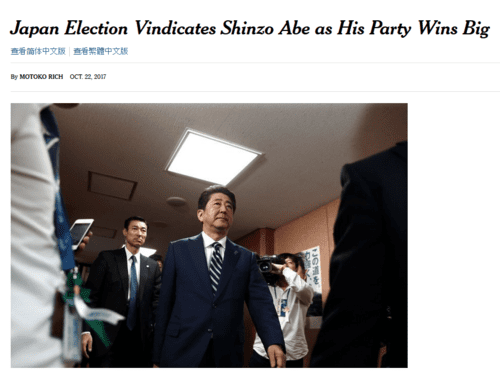 Also this week, there was an election in Japan.

That country of course does not have a President. Its head of state is an Emperor. It has a parliamentary government, though, with elections at no more than four-year intervals by law. This interval was actually just three years, Prime Minister Shinzo Abe calling a snap election one year earlier than the legal limit.

Why did he do that? To distract from various simmering scandals, say cynics. To take advantage of a bump in his poll numbers for standing firm against Kim Jong Un's provocations, say the somewhat less cynical.

Some of that, maybe; but mostly because his political opposition is in a state of disarray—always a good moment to call an election.

Abe won his election. [Japan Election Vindicates Shinzo Abe as His Party Wins Big, By Motoko Rich, NYT, October 22, 2017] That would seem to confound my narrative of an anti-Establishment tide sweeping the world's democracies. You can't get any more establishment than Abe's party, the LDP, which has held power—or been the strongest party in a coalition—for 57 of the last 62 years. That would be like Republicans having had just one presidential term since Eisenhower. (Yeah, I know, it sometimes seems like that…)

So why is Japan bucking the anti-Establishment trend? Because it can.

The anti-Establishment turnovers in Europe and the U.S.A. are a result of smug, cocooned political and media elites turning against their own people—embracing globalism, mass immigration, trade policies that destroy whole districts, and cultural attitudes that mock the idea of nationhood.

None of that applies in Japan. The Japanese people—including the elites! —like being Japanese. They don't want to be replaced by foreigners, however much Wall Street Journal editorialists tell them they should. 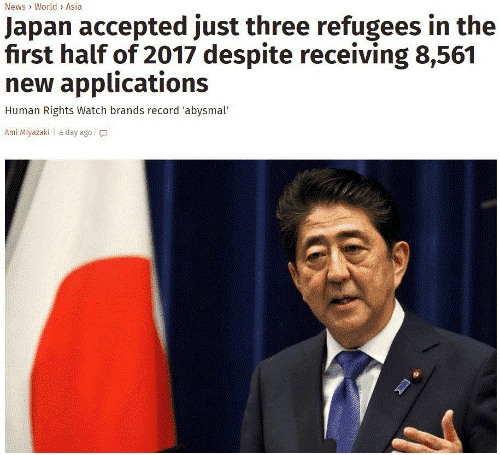 I guess someone was asleep at the switch there in 2016.

So the great ructions over globalism, nationalism, multiculturalism, and mass immigration that are driving anti-establishment feeling in the West just aren't in play in Japan.

The Japanese electorate can concentrate their attention on other matters: energy policy, national defense, social security, the economy.

It sounds nice, doesn't it? A real nation, of people who know who they are, trying collectively to cope with unavoidable political issues—not with horrible problems they have blindly, stupidly, unnecessarily brought upon themselves via ethnomasochism and sentimental fantasies about human nature.

We can only admire, and dream.

This one was in Kenya, for the presidency of that country.

Kenya is in Africa, so you know an election there is going to be … colorful, with the red of spilled blood prominent among the colors.

The Kenyans did not disappoint. There wasn't actually a lot of blood in the run-up to the October 25 election. Only two people were killed: a bagatelle compared with, most notably, Kenya's 2007 election, when eleven hundred people were killed and several neighborhoods destroyed.

However, those two dead have to be added to the fifty-odd killed during and since the original election this past August.

The loser—it was the same guy who lost in August—tried to have this one nullified, too. But only two of Kenya's seven Supreme Court judges showed up for work the day his petition was to be heard, and there needs five for a quorum, so the petition failed.

It's all been very African. Issues? Eh, there are issues in play. Kenyan politics, though, is mainly ethnic—like politics elsewhere in Africa, and like politics in the U.S.A. thirty years from now, if we don't get seriously to grips with the National Question.

The winner, Uhuru Kenyatta, belongs to the Kikuyu tribe; Kenya's biggest at 22 percent, but allied with other tribes like the Embu and Meru.

The loser, Raila Odinga, is a Luo. They're 13 percent of the population, but again allied with other tribes like the Luhya.

What mainly strikes the eye of a British immigrant follower is the antiquity of those candidate's names. Kenyatta, Odinga: I remember them from the early 1960s, when Kenya got its independence from Britain. I was hanging out with Africans in London at the time, listening to their gossip.

Jomo Kenyatta was the first president of independent Kenya. This guy who won on Wednesday, Uhuru Kenyatta, is Jomo's son, sixth of his eight children.

Wednesday's loser Raila Odinga is likewise the son of Oginga Odinga, independent Kenya's first Vice President, and a thorn in the side of Jomo.

Come on: How can you forget a name like Oginga Odinga?

You think we Americans have a problem with dynasties of Kennedys, Clintons, and Bushes? Spare a thought for the Kenyans, who are apparently stuck for ever with Kenyattas and Odingas.

Raila, by the way, is the second of Oginga Odinga's seventeen children. Kenya's current Total Fertility Rate is 3.1, quite low by African standards, so there's been some falling-off there.

I should add too that Raila Odinga—this is the junior, the one who just lost an election, in case you're losing track—Raila Odinga is a Marxist, or what passes for one in Africa. He graduated from a university in then-communist East Germany and named his oldest son after Fidel Castro. This guy is so far-Left, he could be Mayor of New York City.

There's an actual connection with U.S. politics here. Odinga and his son belong, as I said, to the Luo tribe. That is also the tribe of Barack Obama, Sr., the father of our 44th President.

Oginga Odinga was the elder Barack's patron for a while.

In 2006, when Raila Odinga was running for President, Barack Obama Jr., at that time just a U.S. Senator, went to Kenya and campaigned for him, out of either tribal or ideological solidarity.

Note that by that point Barack Obama, Jr. was busy doing something else.

That's African politics for you. Oh, did I mention that Kenya ranks 145 out of 176 on Transparency International's Corruption Perceptions Index, with Denmark at number one and Somalia at 176.

There, I mentioned it!

So, three elections in three different continents, each with a radically different color and flavor to it.