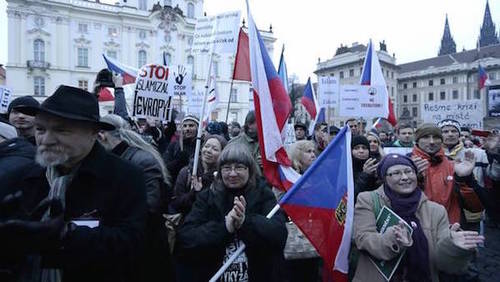 Czech Christmas Message: The Refugees Are an ”Organized Invasion”

Czech President Milos Zeman delivered a Christmas address to his fellow citizens recently that addressed their concerns about events. Unlike the European leaders whose minds have been turned to mush by the false ideology of multiculturalism, Zeman still grasps the concepts of Enemy and National Security. Even though political correctness has sought to pretty up human nature by limiting speech, the old animosities remain in place. He doesn’t accept the narrative of fleeing refugees because so many are healthy young men.

Zeman says his country is to be run for the benefit of its citizens, not to be a social services center for invasive illegal aliens.

Christmas Message from the President of the Republic, Miloš Zeman, 2015

And so, in foreign relations, there is just one dark stain: that is the migrant wave. These politicians, who close their eyes to the fact that this migration wave has still not yet spilled over [into Czechia], [who say] that there is nothing to fear, are just a bit reminiscent of one mayor of Prague. This mayor, at the time of floods, stood on the bridge, and said: the situation is more than excellent [safe]. And two hours later the water had flooded the Prague metro.

Sometimes I feel like Cassandra, who gave a warning before the Trojan Horse was dragged into the city, but I am deeply convinced that what we are facing is an organized invasion, and not the spontaneous movement of migrants.

Those who are standing up for migrants speak of empathy and solidarity. Empathy, if possible, with the old, the infirm and primarily with children.

But the vast majority of illegal migrants are young able-boded men without families. And I ask: why do these men not take up arms and fight for the freedom of their own country against the Islamic State?

And that, of course, is true for even for those who leave the countries where there is fighting, because their departure sentences these countries to further backwardness.

During preparations for the demonstration in support of the migration, at the anniversary of the 17th of November, someone [from the organizers] had informed the news services that, on a banner at this demonstration, the following sign will be displayed: ”This country is not ours. Refugees welcome”.

Somebody had advised these organizers that this sign is exceptionally stupid, and so they replaced it with a somewhat less stupid sign: ”This land belongs to all, refugees welcome.”

And to close my Christmas message, I would like to tell you two clear sentences: This country is ours. And this country is not for, and cannot be, for all.