John Derbyshire Says Ryan Zinke Was Right (Even If He Cucked): Meritocracy And Diversitocracy Incompatible

The picture above is from:  Analysis: The White House releases a photo of its interns, and the Internet asks: Why so few people of color?, by Eugene Scott March 31, 2018.

Recently, I chewed over the concept of meritocracy some , by way of commemorating Michael Young's introduction of the word fifty years ago this year. 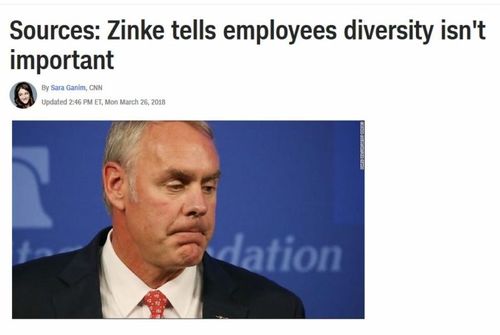 Well, meritocracy's been in the news again last week. On Tuesday CNN reported that Secretary of the Interior Ryan Zinke has said that in personnel matters, he will not focus on diversity. "What's important," they said he said, quote, "is having the right person for the right job," In other words, the Secretary favors meritocracy, not diversitocracy.

Zinke seems to have cucked out once this hit the news. At any rate, a spokeswoman for his department says Zinke never said the things he's alleged to have said. [ Interior Department Denies Ryan Zinke Told Staff ‘Diversity Isn’t Important’ By Hayley Miller, HuffPost, March 26, 2018 ]

Whatever: This is another little tremor from one of the main fault lines in modern society. Of course we want key positions in government departments to be staffed by the best available people. The problem is that the best methods we have for selecting the best people don't deliver correct proportions of women, blacks, Latinos, homosexuals, disabled people, and so on.

Is there is something wrong with those selection methods? In the case of the old Civil Service exams, Jimmy Carter concluded that there must be, so he scrapped the exams for most Civil Service positions. Today, the federal government tells us, quote from their website:

The majority — approximately 80 percent — of federal government jobs are filled through a competitive examination of your background, work experience, and education, not through a written civil service test.

What it means is that judgment of applicants is now "holistic." That's the preferred bureaucratic term, "holistic."

What that means is that the hiring official glances through your records to make sure you have some relevant schooling and experience and are not a career criminal, then hires you or not by quota according to your race, sex, and so on.

This is not a totally contemptible approach. The heart of the matter here is fairness. Yes, we want the best people; but we also want Civil Service job applicants to be treated fairly.

The reason this approach is not totally contemptible is that we used not to treat people fairly in society at large. I add that qualifier because I doubt this applies to Civil Service hiring. I can't see what was wrong with a written test for that.

In society at large, though, things were indubitably unfair until fifty years or so ago. It was hard for a woman to get qualified as a doctor or lawyer, much harder than for a man. Blacks were excluded from all sorts of zones by custom and by actual legislation.

Then we had a Fairness Revolution. Prestigious colleges opened their doors to women, racially discriminatory laws were struck down. For an entire generation now, American society has been as fair as it could possibly be.

There has in fact been a sort of over-shoot: More women than men now attend college, blacks have a raft of special preferences, privileges, and set-asides.

Perplexingly, though, outcomes are still unequal. There are still few women engineers; blacks still do badly at school; a homosexual man is more likely to be an interior decorator than a lumberjack (and conversely for a homosexual woman).

Our collective response to these persistently unequal outcomes is to invoke magic. Strange invisible forces and miasmas are preventing the attainment of identical statistical profiles by all groups: Institutional racism! Homophobia! Toxic masculinity!

These strange forces are the Dark Matter of contemporary social theory, or like the luminiferous ether of 19th-century physics. You can't see, hear, taste, or touch them, but they must be there!

How, otherwise, could outcomes be so unequal after such efforts to attain fairness?

The evidence is now surely in, final and conclusive, that you can have proportional diversity of outcomes by group — by sex, race, and so on — or you can have meritocracy.

But you can't have both.

So which do we want?

Until we make up our minds about that, all the fudging and lying and magical thinking that are exposed in episodes like the Ryan Zinke case will continue to plague us.