VDARE.com Editor Peter Brimelow writes: John Derbyshire, perhaps the most widely-gifted political writer of his generation, was fired from the post-purge National Review three years ago today (April 6). By a happy coincidence, we have FINALLY got his second anthology, From The Dissident Right II: Essays 2013, into print. (Kindle edition due shortly. For first anthology, click here). The new technology is a gift from God, but there’s a steep learning curve. However, we are catching up and will publish the 2014 Derb anthology later this year.

John Derbyshire on why he is in a hole

At the height of the fuss about my being dropped from National Review, the leftist website Gawker.com asked if they could interview me. I agreed, and the interview was published on their website on April 9th, 2012.

The interviewer was Maureen O'Connor, whom I must say I found quite fair and sensible, as Leftists go. For reasons unknown to me they illustrated the interview with a picture pulled off my website. An ancient unsuspected cesspool had collapsed in my back yard a year or so before. The picture (above) showed me standing in the hole looking up.

I have no idea why Gawker chose that picture. Some reference to the idiom "When you're in a hole, stop digging," perhaps? But I'm not digging in the picture, and my supposed fault was not one of wrongheaded persistence. I really have no idea. The leftist brain cannot be fathomed.

(Though the hole could: it was eight feet deep.) 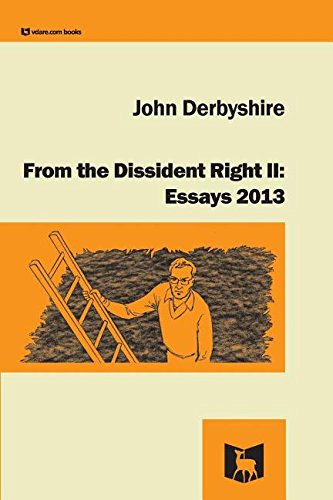 “To side with Truth is noble,” the poet assures us:

Ere her cause bring fame and profit, and ’tis prosperous to be just.

I have been sharing Truth’s wretched crust with the VDARE.com collective since July, 2000. Her cause does not yet bring fame or profit; but on the topics we concentrate on here—issues related to the National Question—there has surely been progress.

To be sure, the Left still controls most of the commanding heights in our society: the schools and colleges, corporations, the courts, labor unions, most of the media. Public discourse on National Question issues, however, is increasingly slipping out of their grip.

Fifteen years ago a regular reader of political magazines and newspaper op-eds could go for months without seeing an article about immigration, for example. The Left never spoke of it; while among opinion journalists on the respectable Right there was a general feeling—I know there was: I was mingling with them—that the topic was out of bounds, and that to hold opinions about it marked one as eccentric and vaguely disreputable.

Nowadays journalists of all factions have the word “immigration” set up in their word processors as a single-key macro, and luminaries of the milquetoast Right give public speeches that would not have looked out of place as VDARE.com columns in 2000. There has definitely been progress.

We can reasonably hope, though, that with illegal immigration now an everyday topic of political conversation, other issues related to the National Question—multiculturalism, bilingualism, race relations, federalism, citizenship, immigration in general—will soon be opened to honest, critical discussion.

This is already happening with race relations. The stupendous levels of black criminality are much more mentionable now than was the case 15 years ago. Respected political voices—Rudy Giuliani’s, in a news story current as I am writing this [Giuliani and Dyson Argue Over Violence in Black Communities, NBC News, November 23, 2014]—speak frankly about it, in a way they would not formerly have done.

Some of these changes in acceptability have been brought about by sheer numbers. Quite remote parts of the U.S.A. now have colonies of immigrants from the poorest, most culturally distant regions of the Third World [Somalis Find New Home in Cheyenne, Wyoming Tribune-Eagle, November 25, 2014.] Mass immigration has turned three major states majority-minority: California, Texas, and New Mexico.

As long-time VDARE.com contributor Steve Sailer has written, the first commandment of Political Correctness is: Stop noticing things! However, as your state, city, or neighborhood fills up with foreigners practicing dramatically different folkways, it gets harder and harder not to Notice.

In the older, more ethnically conservative nations of Europe, the number of Noticers has reached a critical mass, sufficient for them to form plausible political parties. In France, Britain, and Scandinavia, these parties are in the ascendant. There has so far been no comparable political coalescence in the U.S.A., but there is no reason to think it impossible.

The failure of social engineers over several decades to shift racial disparities in statistics on crime or academic achievement has likewise made it harder to continue Not-Noticing those things.

With each decade of failure, the ever more fanciful social-science explanations for the disparities—culture of poverty! stereotype threat!—are ever less persuasive, making innate average race differences in behavior, intelligence, and personality correspondingly more thinkable.

Parallel to these social changes, and reinforcing heterodox ways of thinking about National Question issues, have been scientific advances in areas like genetics and paleoanthropology, enlarging our understanding while narrowing our expectations of how much human nature can be shaped by social programs.

When the history of these changes comes to be written, there will be no better source for the historian than the archives of VDARE.com. Where we have led, meeker spirits have followed, usually at intervals of several years.

Survivors of the 1930s democratic Left in Europe described themselves bitterly in later years as “premature antifascists.” We at VDARE.com are the premature immigration patriots. When, as will surely happen, our cause one day brings fame and profit, and ’tis prosperous to be just, we promise not to be bitter.

You have already helped that cause—the cause of Truth—by purchasing this book, for which we thank you. If you want to give further support to VDARE.com, please consider a tax deductible donation to the VDARE Foundation, using the form that follows this Afterword. [Go here to donate.]

Now, could I share a piece of that crust, please?...Thanks.