John Derbyshire: Larry Nassar Is An (Arab-American) Creep, But Judgette Rosemarie Aquilina Is An (Immigrant) Hysteric 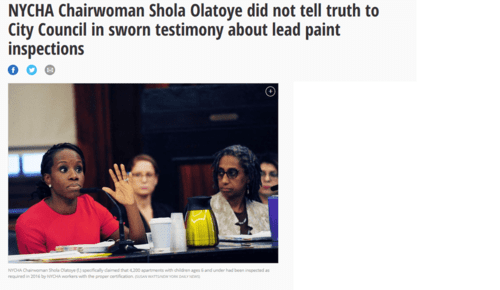 As regular listeners know, I have a newspaper delivered every morning to read over my breakfast oatmeal. It's nothing heavy, just the New York Post, which nicely straddles the borderline between too-good-to-check tabloid idiocy and the honking self-important ponderosity of the broadsheet press.

I don't read more than about ten percent of my morning newspaper. I have zero interest in sports or celebrities. I glance at the business section for old times' sake but rarely read a complete article (though John Crudele sometimes says sensible things about the nation's finances).

The latest story of municipal corruption or malfeasance generally takes up two or three pages, but when you've read one of those stories, you've read 'em all. The perp is some useless incompetent, almost invariably black, given a nice plum job in the New York City bureaucracy in return for supporting the mayor, or just as an Affirmative-Action gesture.

The current flap about the head of the public-housing authority lying under oath is perfectly typical. You could write a computer program to generate these corruption stories. Perhaps the Post does that; I don't know or care.

So there isn't much in my morning newspaper I actually want to read. That's fine; breakfast doesn't take long and I have things to do. They did get my prolonged attention on Thursday this week, though. 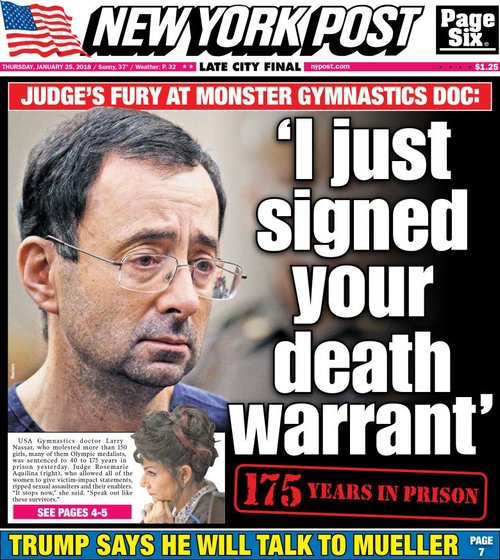 The front-page story was about the sentencing of Larry Nassar, the sports-medicine specialist at Michigan State University who'd been found guilty of molesting young female athletes, including Olympic competitors. [VDARE.com Note: People named Nassar are Arab-American, although not usually Muslim. Not one Main Stream Media stories mention this when discussing this case.]

At the risk of coming across as prurient, or perhaps just over-inquisitive, I always want to know what the perp actually did in these cases. What Larry Nassar did was, he touched the breasts and private parts of young girls while examining them, including three who were younger than thirteen, and penetrated them with his finger, all against their will.

My question: Nassar was doing the stuff he was doing for twenty-five years. How'd he get away with it for so long?

Part of the answer, I'm sure, is the same as the answer to the same question in the matter of show business sexual harassment. In both cases there was a thing that the harassees wanted very, very badly —so badly that they, or in the case of younger victims, more likely their parents—might have considered that submitting to harassment or molestation was a price worth paying for that thing.

In the showbiz cases the thing wanted was a movie part; in Nassar's case, a shot at competing in the Olympics.

I don't say that's the whole story, and I certainly wouldn't say that all the victims took that cynical view. Twenty-five years of silence needs explaining, though. I've no doubt that's part of the explanation.

Note that these were state charges. Nassar was convicted just last month in federal court on charges related to possessing, creating, and destroying child pornography. For that federal conviction he got a sixty-year sentence, of which under federal rules he will have to serve fifty-five years.

Obviously, this is a nasty creepy guy. There's no making excuses for Larry Nassar. The news story does, though, tell us something about our strange times, and about the disturbing level of unreasoning feminized hysteria in society today. If you don't know the etymology of the word "hysteria," I'll pause a moment while you look it up in your Funk & Wagnalls … okay.

First, the sentence. The state judge, name of Rosemarie Aquilina (not a Hispanic, but a Maltese/German immigrant) gave Larry Nassar 40 to 175 years on the molestation charges. [Larry Nassar: Disgraced US Olympics doctor jailed for 175 years, BBC, January 25, 2018] I'm not clear how that sentence is structured or how many years he is likely to serve, but it sure looks like decades.

And that, according to the judge, is after he's served the sixty-year federal sentence.

Sixty plus 175 is 235. Two hundred and thirty-five years—longer than the entire history of our republic. You don't have to be a fan of pedophilia to wonder if that isn't disproportionate.

Two hundred and thirty-five years? For crimes in which no-one was killed, maimed, battered or disfigured, and nothing was stolen? How much time does your average murderer serve nowadays, or arsonist, or rapist—a rapist, I mean, who employs more than his finger?

Again, I'm not making excuses for Nassar. He's a loathsome creep. He should certainly have been fired from his job, stripped of his medical license, and put on some federal register—I'm pretty sure there is one—to ensure that he could never again be alone with young girls anywhere in the U.S.A.

Jail time? Yes; if I were sentencing I'd give him five to ten on all the charges combined. But two hundred and thirty-five years? Come on.

Reading the news story and looking at the accompanying pictures, it's clear that the courtroom was fogged up with estrogen vapours. The sentencing judge disgraced her profession, wrapping her sentence in a preening, gloating, vindictive diatribe. Here's the low point.

[Clip, at 0m55s here: Our Constitution does not allow for cruel and unusual punishment. If it did, I have to say, I might allow what he did, to all of these beautiful souls, these young women in their childhood … I would allow someone, or many people, to do to him what he did to others.]

Hey, what do we hire judges for, if not to let loose with their violent vengeance fantasies on nationwide TV?

The judge's theatricals were supported by a weeping, ululating Greek Chorus of women that Nassar had molested. They'd spent four days sobbing their way through victim impact statements in the courtroom.

Once again for emphasis: Larry Nassar is a disgusting pervert, if we're still allowed to say "pervert," and I'd have sent him down for five to ten with a clear conscience. I just don't agree that what he did was as sensationally horrible as the court, and my New York Post, were making it out to be.

I know I'm a geezer and out of touch, but in my generation, unless you were spectacularly ugly, you didn't make it through childhood and adolescence without an occasional pervert coming on at you. It's not an uncommon thing in the world, and I'm dubious about the claims of permanent mental distress. That Greek chorus in the courtroom keening about their victimhood looked pretty healthy, when they removed their hankies from their eyes long enough for you to get a look at them.

But of course we are in a feminist moment, and keening about victimhood is what every red-blooded American girl is encouraged to do nowadays. I note that not only the judge but also the prosecuting attorneys were females; so was the judge in last month's federal case.

Judge Aquilina of course did not bar males from the courtroom entirely, but you got the impression that she would have done so if she thought she could get away with it.

The judgette wrapped up her gloat-a-thon by jeering at Larry Nassar that, quote, "I've just signed your death warrant." By that point I was mentally composing a petition to repeal the Nineteenth Amendment.

Speaking of the Nineteenth Amendment there brought to mind the late Justice Scalia's penetrating observation in a 2005 speech that if the U.S. Supreme Court in 1920 had had the conceit of itself it has today, there would have been no need for the Nineteenth Amendment.[Constitutional Interpretation the Old Fashioned Way, Woodrow Wilson School on March 14, 2005.] The Supremes would just have found female suffrage hidden in the Constitution, unnoticed for 150 years.