Earlier this week in New York City I attended a talk by Nelson Hultberg of Americans for a Free Republic. It was a good talk, an evening well spent.

I urge VDARE.com readers to check out the AFR website and Nelson Hultberg’s book, available there. If, as AFR hopes, their National Independent Party has candidates on your ballot in 2016, consider voting for them.

Hultberg’s talk was well received by a sympathetic audience. What made everyone sit up, though, was his admission that this was his first trip to New York City.

Say what? Here was an adult American of mature years, seasoned and worldly, a longtime political activist with years of experience in Washington, D.C., who never before set foot in the Big Apple? How is such a thing possible?

That’s New Yorkers for you. If it didn’t happen here, it didn’t happen. Not living here is forgivable, just barely; someone has to keep those other places going, we guess. Not wanting to live here, though, is a mental disorder, or at least the mark of an unlettered rube.

“When a man is tired of London, he is tired of life,” quoth the sage; New Yorkers feel the same way about their town. Nelson Hultberg, who comes from Texas, has a different point of view; but who was ever jolted to hear that an adult American active in politics had never been to Dallas? To Dallas?

People who settle in New York in adult life are surprised to find that for all that outsized municipal ego, the politics of the city are petty and provincial. Amateur activists whose brains are all silted up with college-leftist flapdoodle are mighty movers and shakers in New York City.

Consider for example Melissa Mark-Viverito, current speaker of New York City Council, the municipal legislature. New York State Senator Ruben Díaz, who is himself Puerto Rican, but who is also a U.S. Army veteran and an ordained minister, described Mark-Viverito with fair accuracy as “a communist from Puerto Rico.”

The occasion of that remark was a ceremony held in September to commemorate the 9/11 attacks. At the raising of the flag, all the dignitaries present placed their hands on their hearts in salute—all except Madame Speaker. 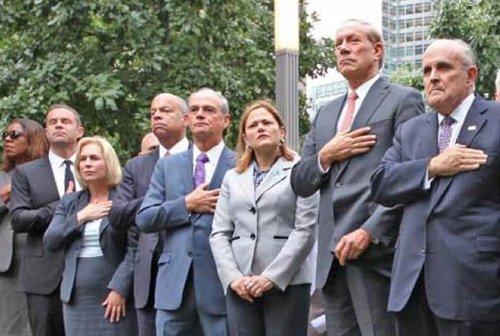 I can understand where she’s coming from. Around age sixteen I and my colleagues in adolescent rebellion ostentatiously remained seated during the post-movie National Anthem then played in British cinemas.

We were, however, sixteen. Speaker Mark-Viverito is forty-five.

That was September. Mark-Viverito’s October headlines in the local press concerned two bills she pushed through the Council to stop most co-operation between city law enforcement and ICE (Immigration and Customs Enforcement).

The previous practice had been for a person arrested on a charge serious enough to warrant incarceration in city jails to have his name run through a federal database. For prisoners likely to pose a threat to public safety, ICE would ask the city to hold them for 48 hours so that they could be transferred for deportation proceedings.

Under the new legislation, which Mayor Bill de Blasio has said he supports, the city will honor immigration waivers if the federal government requests them with a judge’s warrant—and even then, only if the subject of the warrant was convicted within the last five years of a violent or serious crime, or is a possible match on the terrorism watch list. [Council Passes Bills to Stop Cooperation With Federal Immigration Detainers by Jillian Jorgensen; New York Observer, October 22, 2014]

Ah, Mayor de Blasio! The Mayor’s adolescent Dave Spart leftism is not very interesting because too predictable. De Blasio is not yet one year into his term of office, but we already know what he will say on any issue.

What is interesting—downright sitcom-level entertaining, in fact—are the psychodynamics of the de Blasio marriage.

Mrs. de Blasio—although of course she uses her maiden name (or whatever the PC term for that is) Chirlane McCray—is a thin-skinned high-T angry black woman from Central Casting, stuffed up to the nose-holes with resentment and entitlement.

The official line out of the de Blasio-McCray household is the old Bill Clinton two-for-the-price-of-one promise.

Mr. de Blasio … compared Ms. McCray’s place in his coming administration to that of “well-known senior advisers down through history,” and the couple acknowledged the possibility that she might have an office in City Hall or play an important role in an area of city policy.

“She is the most important adviser I have,” Mr. de Blasio said. He called their approach to politics a “partnership model,” adding, “It has served us very well.” [At de Blasio’s City Hall, Expect an Outsize Role for His Wife by Michael Barbaro and Michael M. Grynbaum, New York Times, December 3, 2013]

In practice it turns out that Ms. McCray wears the political pants, at least on matters concerned with race—which are of course the only matters she cares about. In this zone, our good progressive Mayor dares not contradict her. How could he? She’s black. To contradict her would be … you know.

This is the background to the recent fuss about Philip Banks.

Banks, a career cop, was Ms. McCray’s candidate for First Deputy Commissioner of the city police force, a position left vacant by the retirement of Rafael Piñeiro at the end of October. Banks, who is of course black, was also approved by Al Sharpton, with whom Ms. McCray is close.

Unfortunately the appointment fell through. First Deputy Commissioner is one of those second-in-command positions, like Vice-President of the United States, that comes with very little actual power. Power in the New York City Police Department is vested in the Commissioner, currently Bill Bratton, a white guy.

Banks, when accepting the post, seems to have understood that he would be given control of some key areas in police administration. When Bratton disabused him on this point, Banks withdrew himself—retired from the police force, in fact.

This made the Mayor’s wife very, very unhappy.

“I told you we can’t trust him!” a furious Chirlane McCray railed at her husband, Mayor de Blasio, after learning that Police Commissioner Bill Bratton had stood up to Banks during a power struggle Friday that ended with the chief’s resignation, sources told The Post.

By “him” McCray meant Bratton, whom she never wanted to see at the commissioner’s desk. [NYC’s first lady on Bratton: “I told you we can’t trust him!” by Larry Celona, Jamie Schram and Laura Italiano; New York Post, November 2, 2014]

The Mayor obediently called in Bratton and scolded him for not giving way to Banks. The following week—last week—he announced the appointment of a replacement First Deputy Commissioner, Benjamin Tucker—another black man, of course. After a phone call from the Mayor, Al Sharpton, who was at the White House advising President Obama at the time, graciously gave his approval.

Al Sharpton has never been elected to anything by anybody; neither has Ms. McCray. Bill de Blasio was elected to the Mayoralty, though on a sensationally low turnout—only 24 percent of registered voters. (Robert Wagner in 1953 got 94 percent.)

“It was a real leadership and management lesson that I still think about,” he said. “Trying to get a bunch of 8-year-olds to do something is an amazing challenge” … There is … a lot of Little League in the de Blasio-McCray administration. [Just call Chirlane the city’s co-mayor by Bob McManus, New York Post, November 4th, 2014.]

This is politics in the nation’s most sophisticated city: 45-year-old teenage radicals and blackety-black-black race hustlers. Dallas, eat your heart out.