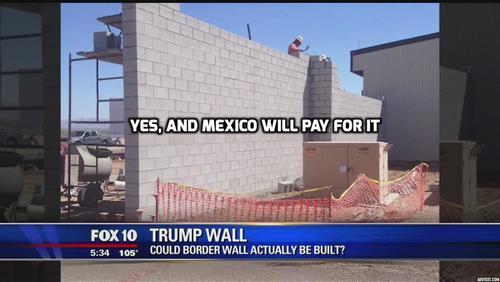 President Trump is still going to Congress, hat in hand, for funds for his border wall.

President Donald Trump said Tuesday he wants Congress to increase funding for his border wall to get the project done more quickly.

The president's planned request has major political implications. He has previously threatened to shut down the government at the end of September if lawmakers do not meet his funding demands for the proposed structure on the U.S.-Mexico border.

"We're going to ask for an increase in wall spending so we can finish it quicker. It stops the drugs, it stops the people that we don't want to have," Trump said as he met with Republican members of Congress about immigration.

"We're spending $1.6 billion now. There's a plan for another $1.6 billion, but I'd like to ask this room if we could increase it," he added.

Of course, the Cheap Labor Lobby that dominates the GOP leadership has no intention of giving the president anything meaningful when it comes to border security. On Wednesday, they will be bringing up a "compromise" immigration bill much worse than the Goodlatte border security bill that narrowly failed last week [Fate unclear as House sets Wednesday vote on compromise immigration bill, by Rebecca Shabad and Marianna Sotomayor, NBC News, June 26, 2018] "All it would take is one tweet" for President Trump to whip support for Goodlatte's far superior bill [Goodlatte: Progress Made on Immigration Despite Bill's Failure, by Sandy Fitzgerald, Newsmax, June 24, 2018].

President Trump is not doing this. He is also not pushing for a remittance tax, which would allow him to keep his campaign promise of having Mexico pay for the wall. This is particularly insane considering the White House was reportedly considering it earlier in the year. [White House weighing a tax on remittances to Mexico to fund border wall, by Gabby Morrongiello, Washington Examiner, August 31, 2017]

s Victor Davis Hanson marveled recently, "Why the U.S. government does not tax remittances and why it does not prohibit foreign nationals on public assistance from sending cash out of the country are some of the stranger phenomena of the entire strange illegal-immigration matrix". [Mexico - What Went Wrong?, National Review, June 26, 2018]

Why President Trump doesn't mention it is even stranger. Does Stephen Miller not know about this? Who, exactly, is advising the president?

There is no reason to negotiate for things you already possess. Especially given today's Supreme Court ruling supporting a large amount of presidential control over immigration policy, President Trump should act from a position of strength, not weakness. After all, Americans elected the man who gave us "The Art of the Deal."

Americans should not have to pay for the wall. Mexico should. Making them do it would be easily done, not just by taxing remittances but by withholding foreign aid or taxing imports. And President Trump should not have to beg Congress for help. After everything he has done for them, the GOP leadership should be willing to give President Trump anything he wants before a tough midterm election season.