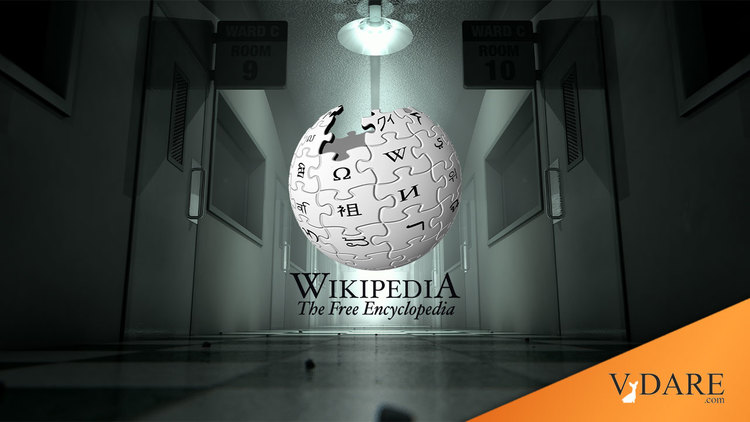 Recently, all Wikipedia pages in German, Danish, Czech and Slovak were blacked out. This wasn’t a technical error. It was Wikipedia’s protest against the European Parliament for once doing something debatably useful: updating copyright laws to stop people from stealing digital intellectual content. [Why Four Versions of Wikipedia Have Deliberately Gone Dark, By David Meyer, Fortune, March 21, 2019] It should be no surprise that the controllers of Wikipedia, and even more so its woke competitor Rational Wiki, should object to such outdated and likely racist concepts as law and private property: to a fatal extent, they are crazed Social Justice Warriors—and a growing threat to political and scientific discourse.

In the ongoing war between reasonable people and Leftism, there is a vital battle being waged on Wikipedia, which, like it or not, is a latter-day oracle of information. Control the fourth-most popular website in the Western world (according to Wikipedia itself) and you, at least partly, control the Western mind. For this reason, online skirmishes over Wikipedia’s non-PC topics are particularly vicious, and the murky manipulators prepared to devote their time to the struggle take fanaticism, and even insanity, to levels that defy belief.

Of course, most of us like to think that we’re above relying on something as obviously untrustworthy as an anonymously-written encyclopedia dependent on non-expert contributors. But scientists really do read Wikipedia entries and reuse the citations in their peer-reviewed articles. [Science is Shaped by Wikipedia: Evidence From a Randomized Control Trial, by Neil Thompson & Douglas Hanley, MIT Sloan Research Paper, 2017] Which means that the SJWs who control Wikipedia actually help to shape science itself.

It’s fiendishly difficult for thinking people to edit articles on areas like as “race” so that they conform to scientific standards, because Wikipedia’s gatekeepers have instituted a raft of tendentious rules in order to stop this happening. [Wikipedia Is Shockingly Biased: 5 Lessons From An Admin, by Mark Hill, Cracked, July 11, 2016]

Wikipedia both reflects and drives a society that seems to be decreasingly interested in empirical truth. As Mark Hill noted in Cracked, Wikipedia also attracts a very specific kind of person. In order to get anywhere in the Wikipedia Wars, you have to be highly computer-literate. The editor must be prepared to spend inordinate amounts of time fighting with anonymous enemies, who will alter his changes, and with “vandals,” who will play around with entries they dislike to make them seem ridiculous.

These petty rivalries have sometimes gotten completely out of hand, with editors using their computer wizardry to work out who their opponents are and then “doxing” them; revealing their true identities and everything they can discover about them. [‘Despicable lies’: Rep. Maxine Waters denies her staff doxed Republicans on Wikipedia, by Alex Horton and Reis Thebault, Washington Post, September 30, 2018]

For some SJWs, controlling Wikipedia is simply not good enough, because Wikipedia does at least maintain something vaguely akin to academic standards—see Wikipedia’s own list of “Reliable Sources”. Accordingly, in 2007, they created a rival, the ironically-named Rational Wiki.

Rational Wiki is a nakedly Cultural Marxist project, its entries openly mocking their subjects, not even pretending to be neutral. According to RationalWiki: What is a RationalWiki article?, [accessed January 11, 2019] they have instead of an NPOV or “Neutral Point Of View” (as claimed, but not achieved, by Wikipedia itself), they have an SPOV, with the “S” standing for either Scientific or Snarky.

But because of search engine optimization tricks Rational Wiki entries appear very high on Google’s rankings. If a “controversial” scientist lacks a Wikipedia entry, then his Rational Wiki combination of lampoon and defamation will rank first when his name is Googled; potentially damaging his reputation. And the entry is also likely to be taken seriously by less skeptical readers.

So, who are these Nerdish Leftists who dedicate their spare time to anonymously fighting in our increasingly violent Culture War?

A particularly diligent and prolific one has been revealed to be a 28-year-old Englishman called Oliver D. Smith. [Rationalwiki’s (Oliver D. Smith’s) attack page about me, by Emil Kirkegaard, Clear Language, Clear Mind, January 10, 2018]. Smith is a truly amazing character; you really couldn’t make him up.

According to British public records, “Oliver Dean Smith” lives with his father, Peter Smith, and Peter’s wife, Sandra, in the picturesque village of Radlett in Hertfordshire; specifically, in “Primrose Cottages.” This “listed (historically important) building” is opposite an old “pub” called The Red Lion. [Google Maps Link] Hertfordshire is a wealthy county in the southeast of England and Smith’s father—whom birth and marriage records mysteriously imply has different forenames from those on the property records—is the director of a construction company .

Oliver D. Smith, who is unemployed, has a twin brother called “Darryl” and appears to sometimes write under his brother’s name. One of Smith’s internet enemies has actually been in direct contact with Smith’s mother (or possibly step-mother; the public records are confusing) about her son’s online behavior [Oliver Smith, Autistic Legion of Doom, Encyclopedia Dramatica, accessed January 11, 2019]

In 2013, Smith graduated with a degree in “Classical Civilization” from London’s Roehampton University, a relatively mediocre school, ranked 70th in the UK. Various nerds with whom Smith has clashed seem to have spent a great deal of time using their “weaponized autism” to work out, from his “sock puppets” (internet false identities), exactly who he is. [The Smiths’ Dark Entanglement, a criminal report, WikipediaWeHaveAProblem.com, March 17, 2017]  It is geeks and faceless internet obsessives, albeit on our side of the lines, who have exposed Smith, but they are open about the sources and reasoning that have led them to him.

Kirkegaard’s own summary of the research into Smith’s background is most enlightening. Smith first appears online, at the age of about 15, with the posting on a forum whose administrators, for whatever reason, added the word “pedophile” to the user description on his name. The following year, Smith wrote of the Columbine killers that, “It’s not their fault at all i mean if you were bullied all day by non-whites of course you would join a right wing organisation online [sic.]”.

In various online forums, Smith has admitted to being a pathological liar who suffers from schizophrenia , though he has then used sock puppets to claim he made this up. Schizophrenia is strongly consistent with his Leftist bias, as schizophrenics tend to be very low in systematizing but so high in “empathy”—reading signals of people’s minds—that they become paranoid and delusional [Mentalism and Mechanism, by Christopher Badcock, Human Nature and Social Values, 2003]

Early in his online career, Smith posted about his “autism” on the radical Right website Stormfront. Some symptoms of autism cross ,over with those of schizophrenia meaning that certain kinds of autistic are sometimes wrongly diagnosed with a mild form of schizophrenia, known as a schizotypal disorder. [Autism spectrum disorders, schizophrenia and diagnostic confusion, by Marc Woodbury-Smith et al., Journal of Psychiatry and Neuroscience, 2010] Smith also denied the Holocaust, advocated a bizarre form of white supremacy, claimed to be a “conservative Christian” and wrote for assorted right-wing online encyclopedias.

It seems, however that he became an SJW at the beginning of 2012. Numerous Wikipedia accounts of his have ended up being shut down leading him to move on to Rational Wiki. (See Encyclopediadramatica.se/Oliver_D._Smith_Brothers, July 13, 2012.) Autistics are prone to an unstable and weak sense of self and thus to dramatic identity changes. [Poor recognition of ‘self’ found in high functioning people with autism, Medical Express, February 6, 2008].

Smith is interested in Atlantis, to the extent of having publishing academic articles on it. [Oliver D. Smith, Independent Scholar, Google Scholar Page, accessed January 11, 2019]. Atlantis-fascination is an example of a “Sensational Interest.” Having sensational interests seems to be associated with aspects of “psychopathic” personality [Sensational interests and general personality traits, by Vince Egan et al, Journal of Forensic Psychiatry, 1999] which correlates with proneness to schizophrenia [Psychopathy and violent behavior among patients with schizophrenia or schizoaffective disorder, by K. Nolan et al., Psychiatric Services, 1999] and autism.  [Comorbid Psychopathology in Autism Spectrum Disorder, by Arlene Mannion et al., Review Journal of Autism and Developmental Disorders, 2014]

Smith has claimed to be, in a nuanced way, asexual (see Emil O. W. Kirkegaard’s lies and defamation about me, AtlantisOliver.wordpress.com November 25, 2018], though he has a passion for violent and sexual movies such as Cannibal Holocaust, and also for pornographic videos such as Naked Tomb Raider. [Sites with evidence and claims, Anglo Pyramidologist – Cold Fusion Community, May 2, 2018]. Hyposexuality is common among schizophrenics, a side effect of the medications they take [Sexual disorders in non/acute psychiatric outpatients, by G. Kockott et al. Comprehensive Psychiatry, 1996]

Clearly, Oliver D. Smith is, well, odd. He would seem to exemplify the phenomenon of “negative Social Epistasis,” whereby, in our world of weakened selection against the accumulation of deleterious mutations, mutants attain positions of social influence and are able to potentially corrupt the norms of civilization, causing others to behave in a maladaptive way in the process.

Online, these disturbed individuals can potentially involve very large numbers of people who, ordinarily, would never come into contact with them, in their delusions. When such “spiteful mutants” become numerous, the rapid collapse of complex societies ensues. I have written previously about the research of a group of scientists who have linked this with the work of John Calhoun, and the rapid collapse of his Mouse Utopia, through new experimental data.

And there’s reason to think that Smith may actually be an—albeit exaggerated to the point of satire—archetype of a “Wikipedean.” Research on Wikipedeans has found they are substantially motivated by “ideology,” specifically of an egalitarian kind [What Motivates Wikipedeans? by Oded Nov, Communications of the ACM, 2007]. They are lower than are non-Wikipedeans in the personality traits of Openness (which fits, because Openness predicts being ‘arty’ rather than a Nerd) but also in Agreeableness (altruism) and Conscientiousness (impulse control) [Personality characteristics of Wikipedia members, by Y. Amichai-Hamburger et al., Cyberpsychological Behavior, 2008].

When these psychopathic personality traits are put together with a childlike rejection of authority and of traditional purity rules based around sex [Jonathan Haidt: The moral roots of liberals and conservatives, by Jonathan Haidt, TED, 2008], then you have the typical Wikipedia writer.

In other words, the store of human knowledge is now being—at least to some extent—censored, manipulated, and even directed by anonymous, mentally unstable malcontents, quite a few of them literally living in their moms’ basements. And many of them, are likely, only marginally less bizarre than Oliver D. Smith.

Such people can spend all of their spare time focused on their own little contribution to destroying Western civilization, facing no consequences whatsoever. In contrast, a patriot who makes a throwaway remark online can lose his job.

In this war, we need to know our enemies and Smith’s targets have done an excellent job in unearthing exactly who is directing a particular “Black Op” of the many that are underway. Hopefully more of this will follow.

And hopefully, as these counter-operations continue, people will increasingly realize that Wikipedia and similar Wiki-type projects must be treated with caution. These are not “Democratic Encyclopedia(s).” They are a democracy that has been overthrown by schizophrenics, psychopaths, deviants, and people who’ve never really grown up.