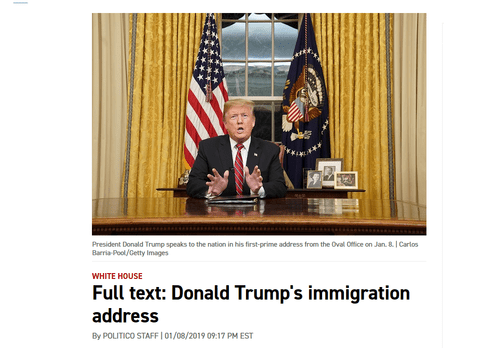 A Reader Says Trump Should Implement Mandatory E-Verify, Use El Chapo's Fortune To Build The Wall, And Not Surrender On The Shutdown

Re: A Reader From North Carolina Has Advice For The President On Shutdown Strategy

I read the letter from a North Carolina reader posted on January 10, 2019 that advised Trump to capitulate on wall funding after giving yet another speech about immigration reform. I cannot agree that this is a good idea.

If Democrats in Congress will not negotiate with him, he has to use his executive authority. A declaration of a national emergency will certainly be challenged by Leftist organizations in the courts, but that is the case on nearly everything that this President does.

One of the primary successes of the Trump Administration is the stacking of the federal judiciary. Trump has nominated, and the Senate confirmed, 30 Circuit Court judges in his first two years. A majority of those Circuit Court judges are now Republican appointees, and that number will only continue to grow over the next two years. It also seems quite likely that President Trump will get a third Supreme Court appointment given Justice Ginsburg’s declining health and advanced age. The Left vigorouslyfought Trump on his so-called “Muslim Ban,” but he ultimately won in the Supreme Court.

If Trump cannot get the money from Congress he should immediately declare a national emergency and start building the wall. He should then use his executive authority to start impounding remittance payments to Latin America under the theory that this money is being used to finance human trafficking and drug smuggling. That should force Mexico to the negotiating table to pay for a portion of the wall. Next he should issue executive orders on birthright citizenship and mandatory E-Verify .

There are provisions in the Immigration and Nationality Act that would allow President Trump to implement mandatory E-Verify as outlined in a recent article by former Immigration Judge Andrew Arthur. [Could the President Mandate E-Verify? |Probably—IRCA is looser than you might think, CIS.org, December 28, 2018] The concern from the North Carolina reader that a Democratic President will use these actions as precedent when they are in power is wholly unpersuasive. A President Kamala Harris is going to use this authority regardless of what Trump does or does not do.

However, at least with regards to the wall, I think the Democrats in Congress will ultimately cave to Trump’s demands. These federal employees not getting paid are overwhelmingly Democratic and minority voters. Democrats in Congress have to deliver for them, and they will suffer the consequences if they do not acquiesce to Trump in some way. Those federal employees were not going to vote for Trump anyway. They cannot really hurt him politically. Once they cave, the debate can then shift to forcing Mexico to pay for the wall. A remittance tax is a good idea, but I am also a big fan of the EL CHAPO Act proposal by Senator Ted Cruz. Basically, forfeit El Chapo Guzman’s fortune, which could be as much as $14 billion, to fund the wall.

If President Trump wants to be re-elected, he has to keep at least some of his promises on immigration—particularly the wall. These Court battles may take some time, so he might as well get started now so that he has some accomplishments to point to during the 2020 campaign.