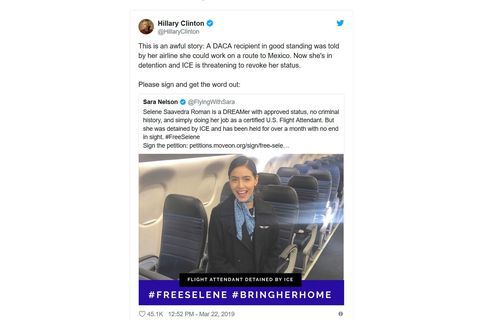 Now we know who we voted for in 2016: Hillary Clinton. It seems I was wrong about Kirstjen Nielsen (LadyDACA ) as the evil monstrosity behind the melt-down at the border and the collapse of interior enforcement. The real brains behind the sabotage is Hillary Clinton. Apparently President Trump has outsourced immigration enforcement to Crooked Hillary and Dianne Feinstein. You think I exaggerate?

An illegal alien from Peru, Selene Saavedra Roman, was, and by “was” I mean she no longer qualifies, a Deferred Action for Childhood Arrivals (DACA) beneficiary. She entered the United States illegally, though it’s not clear if she was an Entry Without Inspection (EWI) or an overstay after fraudulently obtaining a non-immigrant visa like Rapper 21 Savage. She then stole a job with an international airline from an American, after which she left the United States to enjoy her new status as a stewardess, travelling by air to Mexico. Upon her return, she was arrested as an illegal alien. But Secretary of DHS Crooked Hillary decided otherwise.

For six weeks, Selene Saavedra Roman has been living what her husband describes as “a nightmare”. In February, in the first few weeks of a new job as a flight attendant with Mesa Airlines and on a turnaround flight from Mexico, she was detained at George Bush intercontinental airport in Houston.

Saavedra Roman entered the US from Peru 25 years ago, when she was three, with parents who did not have documentation. As such she is a Dreamer, a recipient of Deferred Action for Childhood Arrivals status, or Daca. Therefore, under Trump administration rules implemented in 2017, she is barred from traveling outside the US.

The Mesa flight was the first time she had left the US. Naturally, before the flight she was concerned this would jeopardize her Daca status.

[‘A Nightmare’: Flight Attendant With DACA Status Held After Flying For Work, by Sarah Betancourt, The Guardian/Yahoo, March 23, 2019]

Even though David Watkins, her husband, said she had put Mexico and Canada on her “no fly” list when she was hired this winter, her new employer said via email and phone she could fly to and from Mexico in safety.

It turned out her concerns were valid. US Immigration and Customs Enforcement (Ice) officials detained the 28-year-old, despite her status and lack of a criminal record, and she spent more than a month in the Montgomery processing center in Conroe, Texas.

So, she knew she could not depart the United States, but did it anyway, allegedly at the advice of her employer.

But it gets worse, it appears that ICE and DHS report to Crooked Hillary.

Eventually, her plight was noticed by Hillary Clinton, who recommended followers sign a MoveOn.org petition calling for her release. On Friday evening, Saavedra Roman was let go.

In a statement provided by her lawyer, she said: “Being released is an indescribable feeling. I cried and hugged my husband and never wanted to let go. I am thankful and grateful for the amazing people that came to fight for me, and it fills my heart. Thank you to everyone that has supported. I am just so happy to have my freedom back.”

Apparently LadyDACA takes her instructions not from the President, but from tweets from Crooked Hillary.

This is an awful story: A DACA recipient in good standing was told by her airline she could work on a route to Mexico. Now she's in detention and ICE is threatening to revoke her status.

And, as usual with DHS, it gets worse. But first some background. Little Miss Roman was an :arriving alien crewman" according to the Immigration and Nationality Act (INA); arriving crewmen are admitted as D-1 Crewmen, if they have a D-1 Non-Immigrant Visa (NIV). If the arriving crewman does not have a D-1 NIV, or other appropriate NIV, that alien is to be refused under the INA and removed by the agent or owner, in this case Mesa Airlines, on the same vessel or aircraft. As a practice, U.S. Customs and Border Protection (CBP) allow the owner or agent to remove the crew member on the next departing aircraft or vessel, or require the owner or agent to remove the alien crew member on the next available commercial flight or other vessel.

However, while this article tries to blame U.S. Immigration and Customs Enforcement (ICE) for her spending six weeks in custody, ICE is not the guilty party; it cannot be blamed for her incarceration. ICE was not the arresting agency. Customs and Border Protection Officers (CBPO) from the Office of Field Operations (OFO), CBP, at the Houston Airport arrested her upon arrival. For some unknown reason they turned her over to ICE for six weeks. Obviously, Mesa Airlines has daily flights to Mexico from George Bush International Airport. In fact, Mesa Airlines is a subcontractor for American Airlines for the dozens of daily flights to various cities in Mexico. According to law and policy, Roman should have been refused entry as an inadmissible crewman, and placed on the Mesa Airlines return flight to whatever city in Mexico she arrived from, or any other city in Mexico. There was no need to place her in custody. Even if CBP did not refuse her entry as an ineligible crewman, the second, though less appropriate action, was Expedited Removal (ER). ER is the removal process for illegal aliens encountered either at a Port-of-Entry (POE) or arrested in the interior of the United States within two years of entry by an illegal alien. Generally, ER is not used for refused crew members, but it is not prohibited to use ER. A "crewman refusal" is to the benefit of the alien, as there is no future statutory bar to re-entry. In any event, an ER would have her on the next plane out.

However, the bright lights at George Bush International Airport did not do either. Apparently the CBPOs placed her in removal proceedings before the Executive Office for Immigration Review (EOIR), the immigration courts. This, despite the fact that she was ineligible for a court hearing as she was an arriving crewman and also subject to ER. There is a reason this happened. CBP was created out of the Inspections section of the legacy Immigration and Naturalization Service (INS) and the similar Inspection section of the legacy U.S. Customs Service (USCS) in 2003 with the Homeland Security Act that created the agency later to be known as CBP. This was called One Face At The Border. I warned President Trump that CBP would present a problem in implementing his new immigration policy.

Moving further down in the enthusiasm scale: the Office of Field Operations, responsible for both customs and immigration law enforcement at Ports-of-Entry (POE), where persons and goods are inspected upon application for admission. OFO is responsible for a large number of arrests and removals of aliens at the POEs. Its management and outlook is dominated by legacy USCS employees, and consequently is unenthusiastic about its immigration enforcement mission. The U.S. Customs Service simply does not have the same zeal about enforcing immigration law as did the old INS.

OFO has long been purging legacy INS Immigration Inspectors and managers from its staff, which is based on the long bureaucratic conflict that the legacy INS and USCS had for decades. It has consequently lost much of its knowledge of immigration law and procedure, which is not well taught at the CBP Academy at the Federal Law Enforcement Training Center, Brunswick, GA.

[President Trump Will Have Foes In Immigration Bureaucracy—But Also Friends. They Can Help Him Win, by Federale, VDare, April 25, 216]

Now logically, there should be at least a 50/50 split between senior management positions between legacy INS and legacy USCS employees. Logically, the split should be by skill and appropriate legal knowledge. At airports, the issues are mostly immigration related, so management at the Houston Airport should be legacy INS personnel with the knowledge base to effectively perform duties related to immigration law and removals of various types. Similarly, at a seaport, which deals mostly with cargo, logically a legacy USCS officer should be there, given his background in customs law and policy. But instead, legacy USCS employees have taken over CBP and destroyed the knowledge base of immigration law and procedure, resulting in illegal aliens like Selene Saavedra Roman not being immediately deported. I don’t know if Charles Perez just does not know immigration law, which is bad enough for someone in his position, or he is a saboteur, more interested in following the Hillary Clinton line. But because he did not order Roman removed immediately either as a refused crewman or as an ER, she is not back in the United States and will be illegally adjusting status here.

President Trump, it is clear that your DHS is responding to Crooked Hillary rather than to you. Time to clean up DHS. Fire LadyDACA, and Charles Perez!