On my occasional theme of educational nationalism, I'm pleased to see that Senator Tom Cotton of Arkansas has suggested banning Chinese students from studying STEM subjects in our universities. He told Fox News::

The Senator is right, but late. We've educated so many Chinese students the past thirty years that Chinese colleges are now well-staffed with US-educated professors. There's hardly any need for them to send students here anymore.

(I did smile to read, though, that one unnamed left-wing commentator had mocked Senator Cotton by pointing out that Shakespeare was not an American. I'd really like to know who that commentator was so I can present him with my Non Sequitur of the Week Award.)

Two countries (which by a remarkable coincidence seem to have done well in the fight against the WuFlu plague) seem also to be combatting China:

Three weeks ago I warned the folk Down Under that they are in danger of becoming a Chinese colony. Their economy, I observed, is heavily dependent on digging minerals out of the ground and selling them to China. They sell a lot of agricultural produce to China, too.

And then there is education: Australia gets seven and a half billion dollars a year from Chinese students paying full tuition at Australian universities.

(That was the number I got from a global statistics website. A news story at Breitbart.com this past Monday gives thirty billion [China Warns Australia: Drop Coronavirus Probe or Pay an Economic Price, by Simon Kent, April 27, 2020]. I don't know which figure is right; but plainly educating Chinese students is big business for Australia.)

I'm glad to say the Aussies have not yet sold their birthright for a mess of bean-curd. Scott Morrison, the Australian Prime Minister, has joined our own President Trump and other national leaders in calling for the ChiComs to publish a full account of how they've dealt with the pandemic from its origins. Quote from Prime Minister Morrison:

I don't think anybody's in any fantasy land about where it started. It started in China and what the world over needs to know—and there's a lot of support for this—is how did it start and what are the lessons that can be learned.

That needs to be done independently and why do we want to know that? Because it could happen again.

That caused the ChiCom ambassador to Australia, a very lifelike automaton named Cheng Jingye, to give us a glimpse of the iron fist inside the ChiComs' velvet glove. The ambassador didn't say anything about commodity exports, but he did threaten the education, tourism, and agricultural sectors of Australia's economy, honking that

I think in the long term … if the mood is going from bad to worse, people would think "Why should we go to such a country that is not so friendly to China?" The tourists may have second thoughts … The parents of the students would also think whether this place which they found is not so friendly, even hostile, whether this is the best place to send our kids … Maybe also the ordinary people will say why should we drink Australian wine or to eat Australian beef?

I guess we should be grateful that the ambassador-bot at least didn't tell us that Australia had hurt the feelings of the Chinese people. I always wince when the ChiComs pull that one, which they do a lot.

The Aussies are so far standing firm on this ChiCom bullying, I'm glad to say. One member of parliament has called the ambassador's remarks "despicable and menacing." Former Foreign Secretary Alexander Downer, a respected senior figure in Australian politics, said the ambassador had behaved in "a reckless, undiplomatic way." And so on. There's quite a tiff going on down there.[Chinese ambassador's coronavirus inquiry warning was 'reckless, undiplomatic,' Alexander Downer says, by Nick Wiggins and Sasha Fegan, Australian Broadcasting Company, April 29, 2020]

Sweden, of all countries, is also taking the lead in combatting China. In part this is because the ChiCom ambassador to Sweden is an exceptionally nasty piece of work.

When I was studying Chinese in London forty years ago I once asked our lecturer, a worldly Chinese fellow of whom I can only remember the surname Tang, if there were any movies I could watch to help me understand ChiCom politics. He replied with no hesitation at all: "The Godfather."

That is a very good insight. The Chinese Communist Party is a crime syndicate, a clique of amoral gangsters, ready to do anything at all—lie, steal, torture, murder—to preserve their own power and privilege.

Their ambassador to Sweden illustrates this with exceptional clarity. Interviewed on Swedish public radio last November, he said:

We treat our friends with fine wine, but for our enemies we have shotguns.

How Sweden copes with Chinese bullying, The Economist, February 20, 2020

That's only a hop and a skip away from "keep your friends close, but your enemies closer." These people, the ChiComs, are hoodlums. As China gets richer and more powerful, the nation's representatives can less and less be bothered to hide the fact.

The biggest irritant in Sweden's relations with the ChiComs has been the case of Gui Minhai, a naturalized Swedish citizen of Chinese birth who, living in Hong Kong, wrote gossipy books about the extravagant, corrupt lifestyles of the ChiCom elites, including capo di tutti capi Xi Jinping.

Gui was kidnapped by ChiCom agents in Thailand in 2015. He reappeared in mainland China two years later, but was barred from leaving the country.

In January 2018, Gui—a Swedish citizen, remember—was arrested by plainclothes police while travelling on a train from Shanghai to a medical appointment in Peking, accompanied by two Swedish diplomats. February this year, after a perfunctory show trial, he was given a ten-year jail sentence for "providing intelligence" to foreign nations.

The authorities told us he had renounced his Swedish citizenship…voluntarily. Right.

Let's hope Mr. Gui is not sleeping with the fishes.

The Swedes have been admirably firm about this. Several Swedish cities have ended their twinning arrangements with Chinese cities. The so-called Confucius Institutes, ChiCom propaganda outlets in Swedish universities, have all been shut down [Gothenburg axes twin city agreement with Shanghai as Sweden closes all Confucius Institutes, by Rachel Wong, Hong Kong Free Press,  April 24, 2020]. Last November Sweden's parliament passed a law to compel a national-security review of Chinese telecom company Huawei as a supplier to Sweden's 5G network, as reported by the Economist, above. When Pew Research polled 34 countries last year on public attitudes to China, Sweden came out as second most negative, after Japan [People around the globe are divided in their opinions of China, by Laura Silver, Kat Devlin and Christine Huang, December 5, 2019].

So all strength to the Swedes for standing up to the Peking Cosa Nostra.

There's a special bit of resonance here for those of us who have dabbled in Sinology: one of the greatest scholars in the field in modern times was Bernhard Karlgren, a Swede. Karlgren himself was before my time—his dates were 1889-1978—but I did once meet his disciple and biographer Göran Malmqvist, another fine Swedish sinologist, who died just last year at age 95.

Karlgren and Malmqvist were scholars of language and literature, not political science. Still, I'd like to think that they are smiling down with approval at their native country from whatever place it is that Swedish sinologists go when summoned to the Afterlife.

But these bullying ambassadors fit into a pattern of the ChiComs taking advantage of the present crisis to flex their muscles. They've been leaning hard on Hong Kong the past few days, getting dissidents arrested and tearing big holes in the Basic Law that is supposed to guarantee Hong Kongers' freedoms of speech and assembly until 2047 [China Takes Harder Line on Hong Kong Amid Coronavirus Protest Lull, by Joyu Wang and Rachel Yeo, WSJ, April 30, 2020].

If street demonstrations start up again as the lockdown loosens, I'm guessing there will be some serious repression in Hong Kong, perhaps a repeat of Tiananmen Square 1989 with tanks in the streets.

FOOTNOTE:  As sturdy as the Australians have been in standing up to ChiCom bullying, they have not been immune to the loathsome, nation-killing blight of Political Correctness. 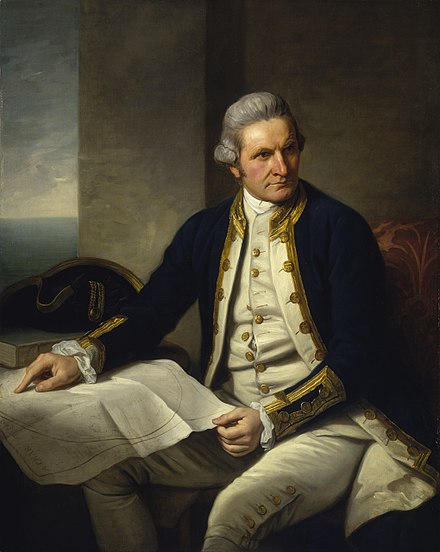 The issue here is the commemoration this Thursday, April 29th, of Captain Cook's arrival in Australia 250 years ago. The commemoration has of course aroused much wailing and rending of garments from ethnomasochist white Australians and front men for the Aborigine lobbies.

Sample quote from one of the former, a spokesman for the National Museum of Australia, quote:

The perspectives of First Australians, and the Gamayngal people of this area, have been largely missing.

Well, yes: Their perspectives have been missing because they were illiterate, and so unable to record their "perspectives."

To that spokesman, and anyone else whose job obliges him to utter similar banalities, I recommend the wise words of Dr. Johnson to James Boswell:

Don't cant in defense of savages.