Here’s some common sense about what’s important on the world scene. As Tucker Carlson and Senator Tom Cotton (R-AR) agreed, the worsening coronavirus outbreak looks to be more worthy of media coverage that the snooze-worthy lawyer-fest on TV, aka the Trump Impeachment Trial, where the Not Guilty outcome is highly likely in the Republican-majority Senate. But Democrats hope against hope that some presidential malfeasance will turn up in the process — which hasn’t happened yet in three years of searching. 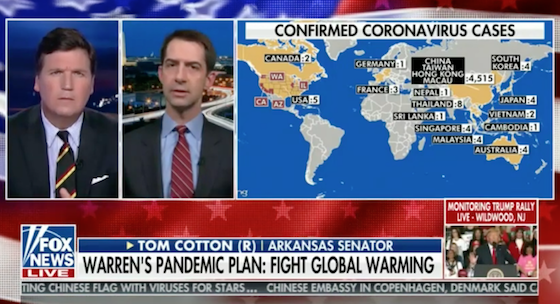 Regarding the somewhat mysterious disease, Senator Cotton recommended Ben Franklin’s admonition that Prevention is the best policy, and that travel from Red China to the United States should end immediately — particularly when Beijing has a history of dangerous secrecy regarding contagion, such as happened during the 2003 SARS outbreak.

Why hasn’t President Trump pulled the plug on Chinese travel yet? How many Chinese are thinking now is the time to leave and disappear into one of America’s Chinatowns?

Here’s a video from Senator Cotton’s Youtube channel, which starts a little late in the introduction, so I added a couple preceding sentences from the discussion.

TUCKER CARLSON: Elizabeth Warren’s fading presidential campaign, meanwhile, has put out a plan for fighting coronavirus and other potential pandemics. One top line item is fighting global warming. Huh? Of course, and actually one of the top causes of the disease is apparently racism. Right? Okay.

This is not science obviously, it’s religion, but whatever. In that spirit Warren’s plan calls for, “building equity protections” into funding for emergency preparedness. What the hell is this?

Senator Tom Cotton has been following it closely. He represents the State of Arkansas. He has a more direct plan for containing the outbreak. He joins us tonight.

Thank you so much for coming on tonight, Senator. This Elizabeth Warren plan, parts of it are sort of serious and parts of it — and the main parts are totally deranged. What does racism and global warming have to do with the coronavirus? Any idea?

SEN. TOM COTTON (R-AR): Yes, it’s hard to figure that one, Tucker. It seems like no matter what the circumstance is, the answer is always more government and more of your tax dollars.

Look, there’s a very simple way to stop this virus from coming to America more than it already has, and that is to stop commercial air travel from the Chinese mainland to the United States. It’s exactly what I’ve urged the Trump administration to do today, with of course, caveats to make sure that American citizens and their family members can be evacuated and appropriately monitored.

But that’s the simple solution to this, not Medicare-for-All, and the Green New Deal to address what as you say, could be a global pandemic.

This is one instance in which Benjamin Franklin’s maxim truly is correct, an ounce of prevention is worth a pound of cure.

CARLSON: Okay, so as we started this show tonight, apparently some American carriers have canceled flights between Mainland China and the United States. The administration has not, that we know of, weighed in on this yet.

This disease, this virus is spreading at exactly the same moment when a Chinese spy ring has been uncovered, as you know, at Harvard, and in the Boston area. There’s just a lot going on here. It is very hard to see what would be the argument against taking these precautionary steps, particularly considering Hong Kong, a Chinese satellite has closed the border, like what is going on here?

COTTON: Sure. So Tucker, the Chinese government has a history of dishonesty and incompetence, not only in general, but specifically related to infectious diseases.

Look at what happened with SARS in 2003. China is not acting right now like a government that has control of this outbreak. As you mentioned, Hong Kong has slashed travel from the Mainland. China currently has more than 50 million of its own people in quarantine. That is more than the population of our West Coast combined.

And China has canceled school indefinitely. No matter what they say, China’s history and more importantly, their actions in the last few days tell us that this is a severe outbreak that they do not have close to getting under control yet.

CARLSON: Why am I watching impeachment coverage all day? I mean, you’re in the United States Senate, not your fault of course, but you’re in the Senate. So you’re following this actual story. You’re watching this garbage in Washington. Why are people focused on one and not the other?

COTTON: Tucker, that’s right. Anytime I come out of the impeachment trial for our brief breaks, it seems like there’s been reports of another thousand people who have contracted this virus and a few more that have been killed, and when we wake up in the morning in America, I assure you, those numbers will go up again.

I suspect that months from now, or perhaps even years from now, when people look back at this time, coronavirus will be considered the bigger story than impeachment. I hope that’s wrong. I hope we can get this epidemic under control before it reaches our shores in wide in far reaching numbers.

But again, we should apply an ounce of prevention here, as opposed to a pound of cure after the fact.

CARLSON: That’s exactly right. And I’m totally opposed to alarmism. There’s already too much of it, but we should identify the real risks and focus on them, and this is a real risk.

So I appreciate your calling attention to it. Senator, thank you.