Jared Taylor: Unite The Right—Who Got It Right? Press And Politicians Are Blind To The Truth.

Earlier On VDARE.com: The System Revealed: Antifa, Virginia Politicians And Police Work Together To Shut Down #UniteTheRight 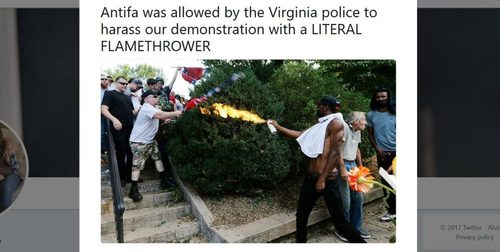 If you get your news from NBC, this is what you learned about yesterday’s Unite the Right rally: “Charlottesville White Nationalist Rally Violence Prompts State of Emergency.” That’s right: The problem was white nationalist violence. It was as if the demonstrators had behaved just like Black Lives Matter or masked antifa: looting, burning, stopping traffic, and roughing up bystanders. Of course, what caused the violence was hostile counter-demonstrators, many of them wearing helmets and carrying shields. If they had not been there, there would have been no violence, and the rally would have taken place as planned.

Of all people, it was Donald Trump who came the closest to getting it right, condemning “hatred, bigotry and violence on many sides.” This, of course, earned him near-universal condemnation. As former Vice President Joe Biden explained, “There is only one side,” and the problem was Unite the Right. This prompted a storm of retweets and similar sentiments. Virginia’s attorney general Mark Herring tweeted that “violence, chaos, and apparent loss of life in Charlottesville is not the fault of ‘many sides.’ It is racists and white supremacists.” Actress Leslie Grossman probably expressed the only-one-side view best.

Here, one side is demonstrating peacefully, though provocatively; the other side—the good side—is committing violent aggression. (Swastikas were extremely rare in Charlottesville, but they make for better “anti-racist” graphics than Confederate flags.) So this is the moral calculus of Joe Biden, the Virginia attorney general, and the rest of the Left. It wouldn’t matter if every hand lifted by Unite the Right was in strict self-defense; the violence is their fault. Racially conscious whites deserve violence simply because of what they think.

Virginia Governor Terry McAuliffe saw only one side, in a widely praised speech, telling Unite the Right, “You came here to hurt people, and you did hurt people.” Is Terry McAuliffe a mind-reader? Would they have hurt anything or anyone if counter-demonstrators had not showed up with shields and batons, screaming and throwing smoke bombs, determined to shut down the demonstration–and hurt “Nazis”?

One young white man did crash his car into demonstrators, killing one. We don’t yet know his motives, but even if he deliberately hurt people, there was just one of him, and everyone associated with Unite the Right has condemned him.

What about the police? They were clearly either incompetent or determined to shut down the rally before it began. The swarms of uniformed men on the scene did very little to separate demonstrators from counter-demonstrators. Television has broadcast one fistfight after another, with no police in sight. Besides the driver of car—who is charged with 2nd degree murder—those swarms of police made only three arrests. What were they doing?

The fighting, which started before the rally even had a chance to begin, was the excuse for police to declare it an “unlawful assembly” and call it off. Jason Kessler, who organized the rally, has rightly pointed out that this meant counter-demonstrators exercised the “heckler’s veto,” successfully silencing people with whom they disagreed. Instead of excerpts from pro-white speeches, the only thing media consumers therefore got was Confederate flags and brawling.

But Joe Biden tells us there is “only one side” to this story. Actually, there are three sides: Unite the Right, which gathered peacefully but defended itself; anti-racists who shut them down; and the police who let them do it.

There is a clear pattern to these events that not one mainstream outlet has noted. There is confrontation only when anti-whites harass and try to stop pro-white events. The reverse never happens. Lefties and non-whites can mount the most brazenly anti-white events, unmolested and with full media approval. It would be hard to imagine a clearer example of this contract—and of the entrenched bigotry we face—than yesterday’s events.

Jason Kessler is scheduled to make a statement to the press today at 2:00 p.m. He is smart man and a brave man. I’m sure we can trust him to make an excellent case for our side.

Update: Mr. Kessler set up microphones in front of the Charlottesville city hall to make his statement. Counter-demonstrators made such a racket that it was impossible for the press to hear what he was saying. Mr. Kessler then appears to have been pushed to the ground, and police escorted him away for his own safety. Once again, a pro-white message has been stifled by anti-white thugs.