Black Lives Matter—Wait, What? A Vigil For An Attempted Murderer Ends With Black Gunman Shooting Three Other Blacks

Over at Stuff Black People Don't Like, Paul Kersey points to an embarrassing incident, one that doesn't fit the Narrative:A Vigil for VonDerrit Myers, a black male in St. Louis shot and killed by a white cop in 2014, Ends With Black People Shooting Three People

Three men were injured Saturday night in St. Louis as gunfire broke out during a candlelight vigil for an 18-year-old fatally shot by a St. Louis police officer two years earlier.

The men, all in their 20s, were shot as they attended a memorial service for VonDerrit Myers Jr. in the 4200 block of Shaw Boulevard near the Missouri Botanical Garden, according to St. Louis police.

Dozens of people who had gathered for the vigil scattered as the shots were fired, according to a witness.

These are all minor injuries—violence is common in urban St. Louis, marksmanship is not. You have to go to rural Missouri to find marksmen.

Investigations by police and prosecutors found that Flanery, who was in uniform but working private security that night, had returned fire after Myers had run from and fired at him.

What that means is that before the embarrassing shooting scrape they were holding a "vigil" for a gunman who tried to murder a police officer. Not an "unarmed" teen, trying to beat someone to death while sitting on his chest, not an unarmed "youth" trying to run someone over with an enormous car, not an unarmed "child" terrorizing passersby and police alike with an exact replica of a firearm.

They were holding a "vigil" for a gunman who tried to kill a policeman with his gun.A eyewitness report from the official report on the shooting[PDF] 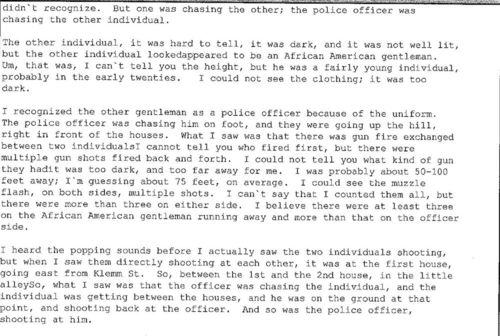 The witness was afraid to have his/her name recorded by police, because it might be released to the media, and in St. Louis, that could mean rioters on your own doorstep, or even death.

We did a post about this case two years ago: Jared Taylor On Ferguson, Vonderrit Myers, And His Nine Millimeter Sandwich: “Do the Facts Even Matter?”(The gunman was alleged to be holding a sandwich rather than a gun when shot.)

Here's what Jared had to say at the time: