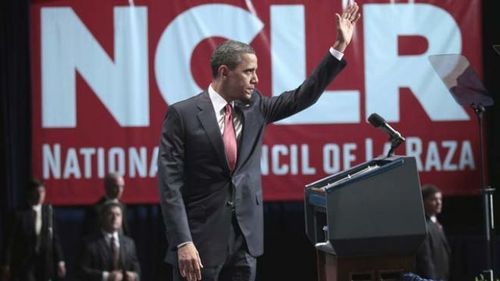 It’s Treason (Again). The Answer Is Impeachment. It Would Work.

"Your country needs you.Our American family will only be as strong as our growing Latino community." Obama To The NCLR, 2011

Back in the summer, when the Obama Regime was conspiring with the drug cartels to dump tens of thousands of illegal alien minors into the U.S., I wrote Obama’s Border Dissolution Is Treason. The Answer Is Impeachment. It Would Work. Tonight, after reading the President’s speech announcing his attempt to impose Amnesty through executive branch coup—easier on the blood pressure than actually watching him—I stand by every word of my argument. And I believe that, had the GOP precipitated an impeachment fight and nationalized the midterm elections on the issue of immigration, it would now have a veto-proof majority.

Still, the result of the midterms means that the GOP can control the Senate’s agenda and now needs to persuade fewer red-state Democrats to change sides to reach the necessary two-thirds approval. In the volatile atmosphere of Senate trial, pressure on these Democrats will be intense. Obama really could be convicted.

But the real objective will be to get him to back off Executive Amnesty. Unlike Bill Clinton, whose crime had been irrevocably committed, Obama can always undo the cause of his indictment. Many queasy white liberals—remember, even the Washington Post editorialized against this reckless step—will press him to do so.

There are, of course, other steps the GOP could take. At VDARE.com, we particularly like the immediate abolition of birthright citizenship, which would deprive the Democrats of their incentive to encourage illegal immigration. But none sends the same simple, devastating message as the disgrace of impeachment.

I occasionally argue that no-one—least of all professional politicians—really knows what is politically possible. Miracles happen—the Gang of Eight Amnesty bill was stopped.

But this means that someone has to think the unthinkable and say the unsayable, because no-one knows when what might suddenly become thinkable, sayable—and doable. I believe that this is VDARE.com’s role—to take risks and push the envelope of public debate. I want to thank our readers for their loyal support at this dark and dangerous moment for the historic American nation.