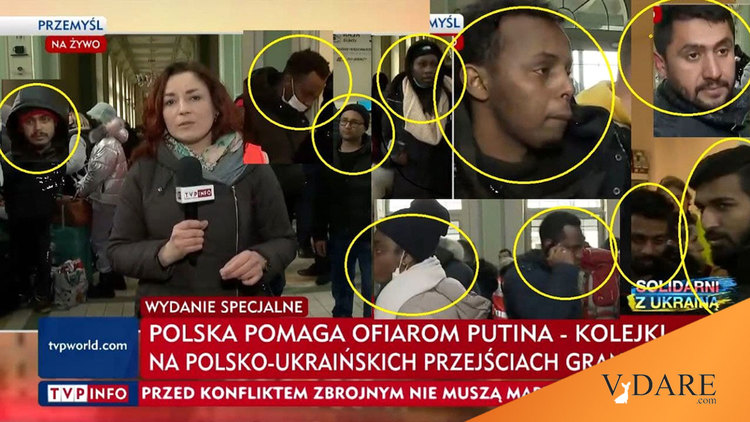 Most of Europe has reacted to the war in Ukraine by opening up its arms to the estimated two million refugees, half of whom are children But not everyone is moved by the support shown to these white, Christian refugees [How the Ukraine war revealed Europe's selective empathy on refugees, by Zeena Safi, CNN, March 16, 2022]. In between hagiographic odes to Volodymyr Zelensky and celebrations of Russian artists being run out of the West a barrage of Regime Media reports and furious editorials have accused Europe, Poland in particular, of “racism” for prioritizing Ukrainians for accommodations over the hodgepodge of Arabs and Africans that have suddenly shown up on the warzone’s border demanding entry [The Russian invasion of Ukraine shows racism has no boundaries,  by Rashawn Ray, Brookings, March 3, 2022].

As most of the world offers its support to Ukraine, we cannot abandon the equitable deployment of civil and human rights. All people, regardless of race or nationality, must be equally allowed access to cross borders to safety, says @SociologistRay. https://t.co/uas9yrv8de

Some of the outrage has been noted here previously on VDARE.com:

In a special U.K. parliamentary hearing recently, Ukraine’s ambassador to Britain Vadym Prystaiko was grilled on the matter, as if he didn’t have more important things to worry about [Ukraine’s ambassador to the UK addresses racist abuse of Black and Asian refugees, by Nadine White, independent.co.uk, March 9, 202].

His answer was simple and direct: the Ukrainians, whose adult male citizens are not allowed to leave the country with their families, do not want their women and children to travel with or share refugee camps with thousands of military-aged black and Arab men. An alternative, he argued, could be to process non-Europeans separately (“maybe we will put all foreigners in some other place so they won’t be visible and there won’t be conflict with Ukrainians trying to flee in the same direction”).]

Ambassador Prystaiko’s solution, needless to say, has powerful opponents inside of the West.

Last week, American black shyster Ben Crump and the legal team that represented George Floyd’s family announced that it was working with an international group of experts to file an appeal at the United Nations that would forbid Poland and Ukraine from rejecting or segregating the non-white economic migrants seeking to get into Europe through Ukraine.

MEDIA ALERT: @AttorneyCrump and attorney Jasmine Rand, who represented the family of George Floyd, have convened a civil society coalition to file an urgent appeal before the United Nations on behalf of African refugees facing racial discrimination in Ukraine and Poland. pic.twitter.com/QQREKpswkt

The UN is shouldering a significant portion of the cost of housing and feeding the Ukrainian refugees, which gives the global body leverage if it chooses to grant the motion.

The UN already appears to already be leaning in Crump’s direction. Earlier this month, the UN High Commission For Refugees put out a statement reminding Poland, Hungary, Moldova, Slovakia and Romania that they must grant full access to their territories to anyone who appears at the Ukrainian border ['As long as you are Black, no one likes you' | Africans fleeing Ukraine report racism and discrimination at the border,  by Kandace Redd, ABC10, March 16, 2022].

'As long as you are Black, no one likes you' | Africans fleeing Ukraine report racism and discrimination at the border https://t.co/WbW2AvM0UN

The UN Special Rapporteur on racism, Tendayi Achiume [Email her], has added to the chorus by condemning Eastern European officials for allegedly engaging in racial discrimination against non-whites trying to enter their countries [Ukraine: UN expert condemns racist threats, xenophobia at border, March 3, 2022].

In reality, the Polish state is allowing everyone in, and the policy has already caused serious problems in border regions. Contrary to what has been reported in the Regime Media, most of the blacks and Middle Easterners who have entered Polish land through Ukraine are not students seeking evacuation to their home countries, but illegal immigrants who are capitalizing on the chaos looking to reach Germany.

Several reports of Africans and Arabs committing violent crimes against citizens in Polish-Ukrainian border cities like Przemysł have been lighting both local media and social media on fire. Even liberal publications, such as Gazeta Wyborcza, have been reporting that a large number of people coming off trains and buses ostensibly meant for refugees from Ukraine are not Ukrainian.

Larger outlets in Polish media and the police have joined forces to claim that all of these complaints are lies, but outraged citizens have responded by uploading videos showing newly arrived non-whites engaging in hijinks such as stabbing shopkeepers and menacing   genuine Ukrainian refugees.

Polish soccer gangs have responded to the uptick in violence from the counterfeit refugees by patrolling the streets of affected towns, protecting Poles and Ukrainians alike.

European and American media have declared this response by patriotic and civically minded Poles an act of bigotry and are accusing the group of engaging in “hate crimes,” but there is no evidence to support this [People of colour fleeing Ukraine attacked by Polish nationalists, by Lorenzo Tondo in Przemyśl and Emmanuel Akinwotu, Guardian, March 2, 2022]

In a separate report on the refugee situation in Moldova, a European NGO complained that Roma Gypsies were being housed separately from Ukrainians  Hardly containing his outrage, the “EERC human rights monitor” reported ethnic segregation and complained that the “the absence of white faces was conspicuous” at the 90% Gypsy refugee facility [Ukrainian Roma in Moldova face segregation, poor conditions and – without documentation – nowhere to go , European Roma Rights Centre, March 8, 2022].

Dubious stories of blacks being beaten and called names by Eastern European border guards are beginning to hit a zenith in Western media.

This one is from the UK Independent’s “Race Reporter” Nadine White:

NEW: "One guard beat me so savagely, & then my period came which only added to the humiliation. They called me Black b*tch, slut, monkey"

But incidents of non-whites being turned away appear to be isolated and, according to the Polish government, centered around the fact that they sought to prioritize women and children over able-bodied adult men for emergency resettlement.

Pressure to house white Ukrainians alongside Africans, Arabs and Gypsies who seem to constantly to arrive at Europe’s doorstep is mounting.

It’s more evidence that the outpouring of support the Ukrainian refugees are enjoying from their neighbors will be weaponized to keep the door open to everyone else.