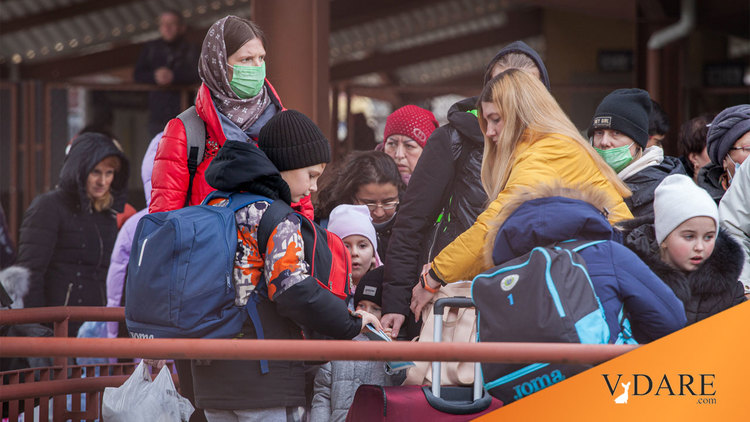 NYT: Racist Poland Is Letting In White Ukrainians But Not Africans Migrating Via Belarus

From the front page of the New York Times news section, an article complaining that racist Poland is treating its Ukrainian neighbor refugees selflessly while failing to surrender to Putin’s minion Belarus’ plot to undermine Western Europe via Muslim African migrants:

Two Refugees, Both on Poland’s Border. But Worlds Apart.

A young man fleeing war in Sudan and a young woman evacuating Ukraine crossed into Poland at the same time. They had very different experiences.

KUZNICA, Poland — On the day war broke out in Ukraine, Albagir, a 22-year-old refugee from Sudan, was lying on the frozen forest floor at the gateway to Poland, trying to stay alive.

Drones sent by the Polish border patrol were looking for him. So were helicopters. It was night, with subzero temperatures and snow everywhere. Albagir, a pre-med student, and a small band of African refugees were trying to sneak into Poland, down to the last few shriveled dates in their pockets.

“We were losing hope,” he said.

That same night in a small town near Odessa, Katya Maslova, 21, grabbed a suitcase and her tablet, which she uses for her animation work, and jumped with her family into a burgundy Toyota Rav 4. They rushed off in a four-car convoy with eight adults and five children, part of the frantic exodus of people trying to escape war-torn Ukraine.

“At that point, we didn’t know where we were going,” she said.

Over the next two weeks, what would happen to these two refugees crossing into the same country at the same time, both about the same age, could not stand in starker contrast. Albagir was punched in the face, called racial slurs and left in the hands of a border guard who, Albagir said, brutally beat him and seemed to enjoy doing it. Katya wakes up every day to a stocked fridge and fresh bread on the table, thanks to a man she calls a saint.

Their disparate experiences underscore the inequalities of Europe’s refugee crisis. They are victims of two very different geopolitical events, but are pursuing the same mission — escape from the ravages of war.

First, there isn’t a war in Albagir’s Sudan, there was a military coup and protests, but that’s pretty much normal for much of the world. Should run of the mill domestic unrest give billions of people carte blanche to move in to countries on other continents?

As Ukraine presents Europe with its greatest surge of refugees in decades, many conflicts continue to burn in the Middle East and Africa. Depending on which war a person is fleeing, the welcome will be very different.

Also, depending upon how many borders they crossed. Fleeing Ukraine for Poland is rather different from fleeing Sudan for Poland (and then presumably on to some EU member with higher welfare). It’s like if there’s a horrible hurricane in the Bahamas: we’re their nearest neighbor. But there are a whole lot of countries closer to Sudan than Poland.

… And all European Union countries, many of which can trace blood ties to Ukrainians, now allow them to stay for up to three years.

Watching all this on a TV in a safe house in the Polish countryside, where it’s too dangerous for him to even step outside, Albagir, who asked that his last name not be used because he crossed the border illegally, said he was almost in a state of shock.

“Why don’t we see this caring and this love? Why?” he asked. “Are Ukrainians better than us? I don’t know. Why?”

What Albagir experienced has been repeated countless times, from the Mediterranean Sea to the English Channel, as European governments have made it difficult for migrants from Africa and the Middle East to enter their countries — sometimes using excessive force to keep them out.

His journey was complicated by the fact that he chose to enter Poland from Belarus, a Russian ally that Western countries said manufactured a huge refugee crisis last year. After Belarus invited in tens of thousands of desperate people from conflict-ridden countries like Sudan, Iraq and Syria and directed them to Poland’s frontier as a way to cause havoc in Europe, Poland responded by harshly cracking down at that border.

Ukrainians are victims of a conflict on European soil that creeps closer by the day. The result is a response from Europeans that is largely loaded with compassion. That leaves refugees from more distant wars feeling the sting of inequality and, some say, racism.

“This is the first time we are seeing such contrast between the treatment of different groups of refugees,” said Camille Le Coz, a migration analyst in Brussels, who added that Europeans see Ukrainians as being “like us.”

… As a boy, Albagir said he watched his homeland of Darfur ripped apart by war and saw “everything you can imagine.” Then he fled to Khartoum, Sudan’s capital, to study medicine. But Khartoum soon exploded into chaos too.

So last November he said he traveled to Moscow on a student visa to take courses at a private university,

Albagir sounds like he’s at about the 95th percentile of wealth for Sudanese.

but after Russia invaded Ukraine, triggering severe sanctions, Albagir feared that his university might be ostracized. So he fled again.

His plan was to travel from Russia to Belarus to Poland to Germany, but he said he hadn’t known that Poland had just reinforced its border to repel the migrants coming from Belarus. …

A few nights later, while Ms. Maslova and her family were admiring a stack of toys that their hosts brought for the children, Albagir and three men he was traveling with were arrested. They had made it across the Polish border undetected, but the driver they hired to get them to Germany

See what I predicted about heading for a higher welfare destination than mere Poland?

forgot to turn on his headlights and was stopped. Albagir said Polish police officers stole their SIM cards and power banks; disabled their phones (so they couldn’t call for help); and drove them back to the place they dreaded: the forest. …

“He punched us, he kicked us, he threw us down, he hit us with sticks,” Albagir said.

He said there was one light-skinned Kurd detained in the garage with them whom the soldier didn’t touch. …

Albagir plans to apply for asylum in Germany, which has a reputation of being generous to all refugees, and finish his studies. He speaks Arabic, English and some Russian and wears gold rimmed specs and has a neat beard. He dreams of becoming a doctor and writing a book about what he just experienced. He said he still can’t believe educated people from relatively prosperous countries would treat people in need this way.

I suspect he’s really thinking that he can’t believe that he, an educated person from Sudan’s elite, got treated badly by some junior high school dropout Belarusian border guard.

When asked if he believed racism was a factor in how they were treated, Albagir did not hesitate.

And from the Daily Mail:

She was allegedly attacked by two Ukraine citizens, 37 and 26, from Iraq, Nigeria

By LAUREN LEWIS FOR MAILONLINE