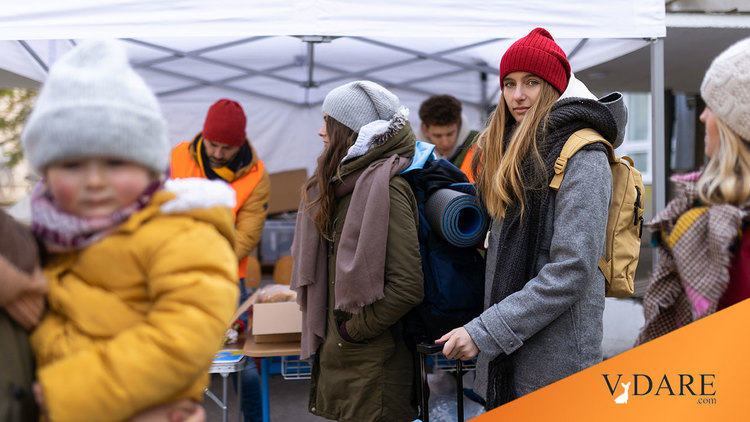 At Amren.com Jared Taylor and Paul Kersey have a podcast entitled ‘It’s Good to be a White Refugee’:

The title of the podcast is from a Daily Beast column by Wajahat Ali.

It’s Good to Be a White Refugee

"The double standards have been so gallingly apparent. You can see the discrepancy between how we talk about white, European #refugees compared to Syrian and Haitian refugees." #TruthToPower via @WajahatAlihttps://t.co/wXuKbfcuXV

Here's what Wajahat writes in the Beast:

I’d strongly recommend being white and European if you must flee your home as a refugee under the threat of violence, war, oppression, or political instability.

Obviously, we should do our best to help the nearly 1 million Ukrainian refugees who have left their borders in the aftermath of Russia’s illegal invasion—regardless of their skin color or national origin.

Why? Because they are innocent human beings desperate to survive and they are requesting help from a global community that can provide it. However, some media colleagues and politicians seem to place an asterisk or conditions on refugees when deciding which ones are worth our attention and hospitality.

It seems whiteness is what magically transforms you into a “civilized” human being worth saving as opposed to inferior Black and brown communities who are also seeking refuge from horrific, ongoing catastrophes in places like Yemen, Syria, Afghanistan, Ethiopia, and Haiti.

This is about the fifth time we've noted an MSM source saying this.

I hope there are some immigration officials smart enough to figure out that if you let Yemenis, Syrians, Afghans, Ethiopians, and Haitians into your country, instead of transforming into what are, in fact "CIVILIZED COUNTRIES," you get trouble.

See Wife Of US Ambassador To Afghanistan: Europe's Afghan Crime Wave Is Mind-Boggling:

“Afghans stand out among the refugees committing crimes in Austria and elsewhere … vicious, no-preamble attacks on random girls and women, often committed by gangs or packs of young men.”https://t.co/oy05rcKHRk