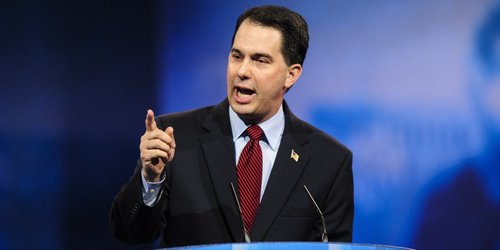 Scott Walker—What Could Have Been

Scott Walker has dropped out of the GOP presidential nomination race. Walker had once looked like a very strong candidate and was leading in Iowa, but his polling position had recently dropped precipitately.

Walker exhibited a number of positive characteristics and seemed like a more normal person than your typical political candidate. His Midwestern persona was a plus, and he might have been able to help the GOP in getting out the vote in the Upper Midwest.

On the immigration issue, he seemed very positive for a time, even breaking the taboo on questioning legal immigration. On the other hand, there were still questions as to how reliable he was.

It's tempting to attribute Walker's fall to Trump's arrival, but the Walker candidacy might have declined had Trump not entered the race. There was something missing in his campaign. In his farewell speech, Walker took a shot at Trump (though not by name), calling on the Republicans to join forces against him.

Scott Walker fell back on "Reaganism", which nowadays has less and less to do with the historical Ronald Reagan anyway. Among Republicans, referencing Reagan is now a form of "virtue signaling". We don't face the same issues as Ronald Reagan faced in the 1980s, and we would best emulate Reagan by taking the National Question by the horns and going with that.

Maybe if Scott Walker had made the National Question his main platform, the candidate might have done better. Well, anyway, he's still the governor of Wisconsin.