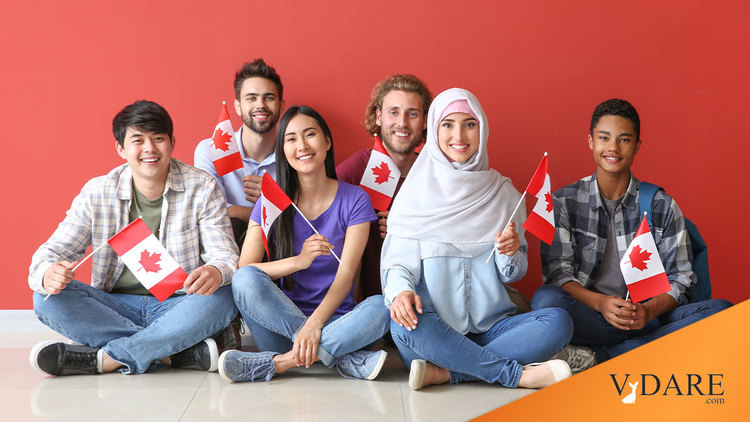 Today, Monday January 23, 2006, Canadians are voting in a federal election. According to some polls the Conservatives led by Stephen Harper are poised to win their first election since 1993.

A Conservative victory, however, probably won't bring any reductions in immigration levels. Determined to win at least some of the immigrant vote from the Liberals, the Conservatives have embraced multiculturalism and are working overtime to present themselves as "immigrant-friendly". They have also dropped any opposition to bilingualism.

On one level, the new Conservative attitude is understandable. The Canadian media is even more politically correct than its American counterpart. Any party that wanted to reduce immigration while rejecting multiculturalism and bilingualism would face endless accusations of racism and intolerance.

It's been almost forty years since Pierre Trudeau came to power and imposed his bilingual, multicultural vision on Canada. Two generations of Canadians have grown up believing multiculturalism is as Canadian as ice hockey and real beer. The policy has become Canada's civil religion and heretics speak up at their peril. It would take a very courageous leader to reject it. (Of course, political leaders should have courage, especially when so much is at stake. But…)

The Conservative attitude towards multiculturalism was summed up in a letter to the Toronto Star written by Member of Parliament Deepak Obhrai:

"In my opinion, multiculturalism is about ensuring minorities are not marginalized by the majority. Assimilation is a concept where the majority want to maintain their dominant position. It's two very different approaches.

"Canada's early history has been less than honorable with respect to its treatment of minorities, as highlighted by recent newspaper headlines of different ethnic groups raising past grievances and demands for redress. When immigration to Canada from traditional countries declined, it became evident that the policy of assimilation could no longer be sustainable. Hence, it was not long before the concept of multiculturalism became an alternative. "

Obhrai might have a point. Whether non-European immigrants can assimilate to Canada's core Anglo-Saxon culture is very much an open question—which is why I believe Canada needs a drastic reduction in immigration levels, perhaps even a moratorium.

But if it's true that non-Europeans can't assimilate, they shouldn't be allowed to come here.

Of course, the reality is that many non-Europeans do assimilate. This is possible as long as numbers are kept at manageable levels, which is no longer the case. One frightening aspect of the present situation is the emergence of huge ethnic enclaves in the Toronto region where about half of Canada's roughly 200-250,000 immigrants (exact numbers vary from year to year) settle.

It should be obvious by now that Canada's immigration policy is a disaster. In 2002, former diplomat Martin Collacott wrote an important report  which highlighted the many problems created by a poorly thought-out immigration policy. Last year economist Herbert Grubel wrote another report for the Fraser Institute, Canada's free market think tank, which described problems with the current policy. Even James Travers, a columnist at the ultra-liberal, rabidly pro-multicultural Toronto Star has published articles describing the problems.

Yet, incredibly, the Liberals want to increase immigration to 300,000 per year.

It doesn't say much for Canadian democracy when the major parties can't face up to the country's most important issue.

Michael Monastyrskyj [send him mail] lives in Toronto and blogs at Dispatches from the Hogtown Front.