Republicans seem to be drawing exactly the wrong lesson from the wreckage of November 3 and ensuing runoffs in Georgia: That the uptick in the black and Hispanic votes means their “messaging worked.” And so they’ll continue mouthing MLK-esque platitudes about race and immigration—the issues that elected Trump in 2016 and he fatally ignored in 2020—and eschew the National Question and defense of the Historic American Nation. As a Venezuelan immigrant, I can say that’s a losing plan.

The GOP’s spinelessness and divorce from reality is truly mind boggling. Having blown yet another election, the party’s Conservative Inc. pundits have been gushing about increasing the GOP Hispanic vote in Miami-Dade and border counties in South Texas [Latino Voters Drifted From Democrats in Florida and Texas, by Arian Campo-Flores and Elizabeth Findell, The Wall Street Journal, November 5, 2020].

Forget that we lost the White House and both houses of Congress—we got some black and Hispanic votes!

Everyone understands the need to put the best gloss on a major loss. But their analysis of the result isn’t just flawed; it’s as if they’re living in a different world.

Thus Fox News’s Dana Perino, a Bush 43 alumna, insists that the GOP must play down/ ignore immigration to continue making those supposedly significant inroads [Revolution From The Middle, by Pedro Gonzalez, The American Conservative, November 6, 2020]. Other Conservatism Inc. stars such as Katie Pavlich claim that Trump’s improvements with Hispanics is proof his anti-socialist message worked. [Latino vote ‘made a big difference’ for Trump in Florida: Williams, Fox News, November 4, 2020] 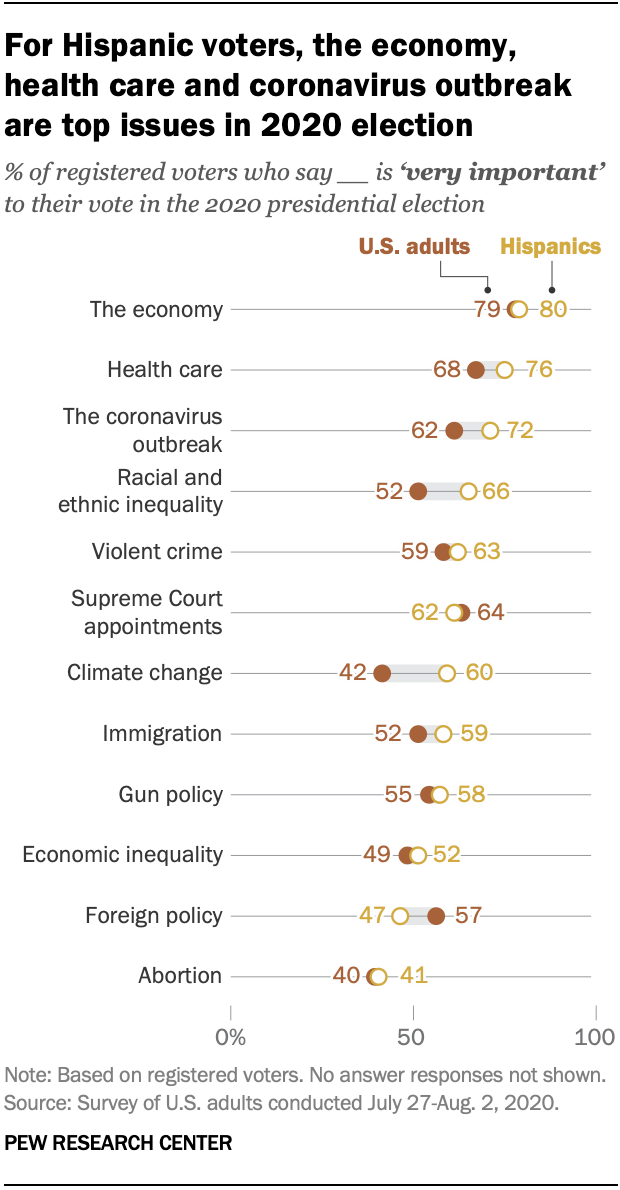 Both are wrong. Perino is stuck on Bush era tropes about Hispanics’ views on immigration. But as we’ve known for years, Hispanics don’t much care about immigration for one simple reason: They (we) are already here! The economy, healthcare, and WuFlu were higher political priorities heading into the 2020 elections [Hispanic voters say economy, health care and COVID-19 are top issues in 2020 presidential election, by Jens Manuel Krogstad and Mark Hugo Lopez, PewResearch, September 11, 2020]. However, they certainly do want the government to extract resources from hard-working Americans aka whites to deal with these issues.

What it will take for the Perino and her pals to get this is unknown.

Pavlich, at least, is half right. But barely half. The anti-socialism message worked well with Cubans and my fellow white Venezuelan compatriots who tremble in fear at the thought of colored hordes of lumpen proletarians trashing and confiscating their property. (Fun fact: Cubans are among the whitest of Hispanic groups in the U.S. According to the CIA factbook, 64 percent of Cubans are white, although post-Mariel boatlift Cubans tend to be less white and slightly more receptive to America’s milquetoast leftist factions within the Democrat Party [Resilience to Spare: The Resettlement Process of Black Cuban Migrants in Albuquerque, New Mexico, by Suyent Rodriguez Candeaux, Syracuse University, May 2019]).

And here’s the thing about my Venezuelan compatriots: Of the state’s 3.1 million registered Hispanic voters, only about 80,000 are Venezuelans [Latinos make up record 17% of Florida registered voters in 2020, by Lsui Noe-Bustamante, Pew Research, October 19, 2020]. Those immigrants tend to be more credentialed with backgrounds in petroleum engineering, finance, and computer programming.

As I detailed in a piece for the Council of European Canadians, Venezuelan political culture is quite leftist [The American Right Would be Wise to Avoid Minority Outreach, December 20, 2020]. Hence, the country’s multi-decade decline. Further Venezuelan immigration to the U.S. will almost certainly import a culturally dysfunctional Leftist class that will vote Democrat. That apparently hasn’t occurred to Little Marco.

As for Hispanics in general, about 70 percent of Hispanics in the U.S. are Mexican and Central American [Facts on Hispanics of Salvadoran origin in the United States, 2017, by Luis Noe-Bustamante, Antonio Flores, and Sono Shah, Pew Research, November 16, 2019]. They don’t much care to hear the insights of Milton Friedman or Turning Point USA’s catchy anti-socialist sloganeering.

The upshot is this: The “anti-socialist” Hispanic vote is largely white and educated. Thus, the supposed appeal of that message is limited. Few if any of the Hondurans tramping toward the U.S. border in the latest caravan are doctors and engineers.

Note, however, that the Black Lives Matter hooligans who wrecked American cities showed that Hispanics aren’t all that sympathetic to the cause: 54 percent of Hispanic Democrats favored using the National Guard to crack down. But that doesn’t make them potential Republican voters. It means they don’t want their neighborhoods destroyed. And as Steve Sailer predicted, they are not as enthralled by blacks as are Woke white liberals.

Which brings me to my next point. Much to the frustration of those of us who understand black dysfunction, the GOP is terrified of the race issue. Thus the party offered jailbreak programs and a conservative facelift of reparations in the shape of the Platinum Plan. Yet blacks still voted for Democrats over the GOP, 87 percent to 12 [National Exit Polls: How Different Groups Voted, The New York Times, November 3 , 2020]

And, again, minorities in general overwhelmingly voted for the Democrat Party [No, Trump Didn’t Win ‘The Largest Share Of Non-White Voters Of Any Republican In 60 Years’, by Avik Roy, Forbes, November 9, 2020]. Unless the definition of the word landslide changed in my sleep, losing by double digits with minorities is a resounding loss.

Again, Steve Sailer nailed it: Trump’s marginal gains with immigrants and minorities do not constitute a reliable GOP trend:

…a common mistake in election analysis is to assume a newly identified trend will always continue. If Trump did better among immigrants in 2020 than in 2016, then by 2032, the GOP candidate will do great among them. Well, perhaps. Perhaps not, though. It’s especially dangerous for Republicans to conclude that this one election trend proves that Republicans should bring in a lot more immigrants, because Real Soon Now they’ll be voting majority Republican.

But on the GOP side of the aisle, we have a Reagan-era answer to this with a three-note riff off Star Wars: “The Force,” the “Freedom Force,” and “The Conservative Squad”  [Meet the GOP freshmen taking on the ‘Squad’, by Melanie Zanona, Ally Mutnick and Sarah Ferris, Politico, December 28, 2020].

They include newly-elected Republican women and minorities that Kirk A. Bado of the National Journal helpfully assembled and shared in a tweet that contained a Venn diagram.

Here it is, and my sources:

The three “forces” will attempt to wage ideological war against “The Squad” and its new recruits with 1980s odes to “liberty” and the “free market,” and such slogans as “a rising tide lifts all boats.”

But the rising tide of minorities is going to capsize the GOP boat.

“Socialism” isn’t the most pressing problem facing the Historic American Nation. It’s not 1980. That appeal worked back then because the country was still significantly white. It isn’t now. Demographic shift— The Great Replacement—is the pressing issue.

What should worry us most about The Squad is not its carping about Leisure-Class social issues, or canceling student debt. The bigger worry is what they are: anti-American subversives who hope to import a foreign occupational class that will remorselessly dispossess whites.

The Generic American Party refuses to recognize this obvious truth. We need warriors to fight for us as a people, but Ruling Class GOP hacks would tweak the tax code, appeal to diversity, pass “criminal justice reform,” and palaver about “freedom” and “capitalism vs. socialism.”

The party’s strategists are either masochists or stupid. Their minority outreach failed. Parading a few token blacks and “Latinos” as dinner speakers creates fireworks, but rank-and-file blacks and Hispanics don’t care for them. They know where their interests lie: in the party of free stuff and racial grievance.

If the country I came to with such great hope is to be saved, a populist America First Right must quickly form. And the easiest way for a true populist to galvanize middle Americans is by unapologetically championing an immigration moratorium.

Who might rise to the occasion? I can’t say.

I can say I fear for the future.