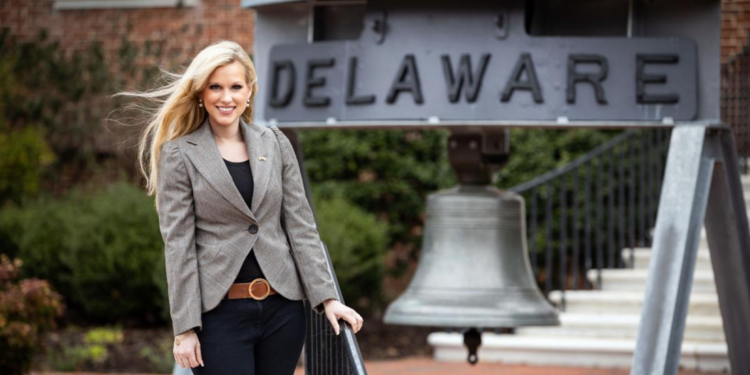 VDARE.com does not endorse candidates or legislation. However, it is very newsworthy. Lauren Witzke is officially the Republican nominee for Senate in Delaware. Delaware is, of course, a blue state. However, this does show that patriotic immigration reform, including a moratorium, is on the ballot.

The Associated Press called the Republican primary for U.S. Senate in favor of Lauren Witzke at 10:16 p.m. Tuesday night.

With 371 of 436 precincts reporting, Witzke was showing 57% of the vote over GOP-endorsed candidate, Jim DeMartino.

Witzke's policy centerpiece is a 10-year moratorium on immigration, a would-be unprecedented change that would drastically alter the country's economy.

Ah yes, the "economy." It's not like Americans are facing mass unemployment after government mandated shutdowns and a pandemic crushed the middle class.
A great deal of the online coverage about Witzke are just typical media smears about her supposed support for "QAnon," a harmless movement that, if anything, favors complacency. Journalists seem to hate it because it encourages looking for new sources of information other than the lying press. However, explicit support for an immigration moratorium is far more important. Lauren Witzke has "immigration" listed at the top of the "issues" page at her website.

It is time for a moratorium on immigration to the United States, until such a time as Congress closes the borders with a wall, and figures out a system of immigration that does not hurt the job prospects of ordinary Americans, or erase American culture.
Lauren plans to pass legislation to fix America’s broken immigration system—and not in the abstract.
She will fight for an immigration moratorium, along with a fully funded and erected border wall, an end to chain migration and birthright citizenship, and to stop massive visa abuses.
[Lauren Witzke for U.S. Senate, Issues, Accessed September 15, 2020]

A good sign that this is the mainstream position in the GOP. Of course, as a nationalist, I think it's just a start, and we should start talking about expulsions. But one step at a time.