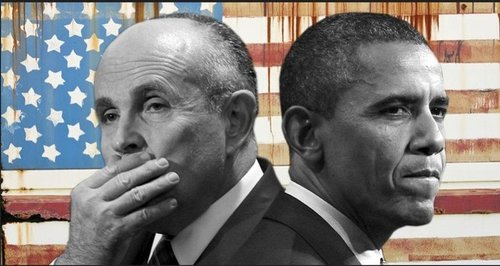 Back in 1987, this writer was invited by friends to advise them on a press conference they had called to oppose President Reagan's signing of an INF treaty to remove all nuclear missiles from Europe.

My advice: Deplore the treaty; do not attack the president.

The next day, Howard Phillips declared that Ronald Reagan had become a "useful idiot for Soviet propaganda."

Howie captured the headlines, as did Rudy Giuliani after that dinner at 21 Club for Gov. Scott Walker, where the mayor spontaneously rose to declaim, "I know this is a horrible thing to say, but I do not believe that the president loves America. ... He wasn't brought up the way you were brought up and I was brought up, through love of his country."

Though this writer heard several radio talk show hosts Friday cheer Rudy on, Republicans swiftly declared that Obama's love for America must not be questioned. Urged to put space between themselves and Rudy, most Republican leaders swiftly did.

The consultant class' advice was near unanimous: Cut Rudy loose.

Sensing retreat, the left pursued. And it is not letting go. They still demand to know why Walker did not renounce Rudy and whether he believes Obama is a Christian. For weeks the governor has been bedeviled for refusing to say in London if he believes in evolution.

Walker's initial response to whether he thought Obama was a Christian was, "I don't know. ... To me this is a classic example of why people hate Washington, and, increasingly, they dislike the press."

Yet, Walker's spokesperson hastily issued this corrective statement, "Of course the governor thinks the president is a Christian."

Monday, Rudy walked back his remark that Obama does not love America, writing in the Wall Street Journal, "I didn't intend to question President Obama's motives or the content of his heart."

The Republican rout was complete.

While this, too, shall pass away, what it reveals is the balance of power in the culture war and which side has the whip hand. And what it portends is a drive by the left to pull the GOP back onto the terrain of moral and social issues where its candidates are, or can be portrayed, as out of step with modernity.

Lately, this writer heard a political analyst say that if the GOP platform opposes same-sex marriage, the party can write off California and its 55 electoral votes. Which may be true. Such has been the cultural and moral shift in America in just a few years.

Yet if the party is true to its past platforms and professed convictions, how can it endorse or equivocate on same-sex marriage?

As for whether one believes in Darwinian evolution, it is neither an inconsequential nor illegitimate question. For where one stands on biblical truth, natural law, a creator and intelligent design is a strong if not absolute indicator of where one comes down on abortion, same-sex marriage, assisted suicide, euthanasia and legalized narcotics.

To traditionalists, the de-Christianized and secularized character of American society is of greater concern than whose flag flies over Sebastopol.

And if the GOP visibly retreats or takes a stand of studied neutrality on these issues, it will lose the enthusiasm of the most ardent of its admirers. And the party can't afford that.

Democrats and their media allies may be expected to elevate the social issues, both because they sever the GOP from the cultural-media mainstream, and they drive a wedge into the party base between economic and social conservatives.

One imagines those conservatives gathered at Club 21 were more interested in hearing how a President Walker would cut corporate and capital gains taxes than how soon Roe v. Wade could be overturned.

Since the Republican victory in November, it has not been a good quarter for the GOP. Obama, repudiated, seems liberated.

Ignoring GOP protests, he issued an executive amnesty for five million illegal immigrants. He promises to veto the Keystone XL pipeline. He taunted the GOP in his State of the Union. He is back to 50 percent approval in the polls.

The economy added 1 million jobs in three months. The Dow Jones Friday hit a record high. Senate Democrats are happily filibustering to death the House bill to defund amnesty. And if the Department of Homeland Security has to shut down for lack of funds, Obama and his media allies will see to it the GOP is blamed.

And the national rollouts of the Bush III and Walker campaigns have shown that neither is ready for prime time.