Anti-racists gather to lament our gains.

Recently I attended an event in Washington, D.C., to discuss “Growing Far-Right Sentiments in Europe and the U.S.” The participants were Charles Lane of the Washington Post, two German professors billed as experts in right-wing radicalism in the US and Europe, and Heidi Beirich of the Southern Poverty Law Center.

All the speakers bemoaned the rise of Donald Trump and of populist groups in Europe. All said the “refugees” were fueling the Right in Europe, and that the dwindling white majority in the United States backs Mr. Trump. They also voiced a growing fear of the internet that gives dissenters a voice. The meeting had an atmosphere of pessimism and gloom that was an almost perfect mirror-image of the optimism and energy of the recent American Renaissance conference.

The two professors showed slides with facts and figures and photos of PEGIDA marches and the like, while Miss Beirich spoke without rising from her stool. Charles Lane, who writes editorials such as “The Dangerous Nihilism of Trump Voters,” was the moderator, feeding softball questions to the other three.

Of the 60 or so people in the audience, 45 seemed to be retired white people, with a handful of non-whites and young folks. Perhaps that was to be expected; the four speakers were old white people, too. They seem to have forgotten their obligation to promote “role models.”

Professor Michael Minkenberg [Email him] who teaches at a university in Frankfurt, spoke first. He noted that the success of populist parties in Europe varies widely, and that they can gain or lose as much as 20 percent of the electorate in a single election. He noted that this is especially pronounced in Eastern Europe, where political parties are less stable, and may appear and disappear from one election to the next. These oscillations make it very hard to predict what might happen next, he said, but stated the obvious in saying that Eastern Europe is friendlier to these parties than the West. He expressed deep disgust for the current regimes in Poland and Hungary, but said nothing about Russia. Of all the presentations, Professor Minkenberg’s was the least vituperative and the most factual.

Heidi Beirich spoke exclusively about Donald Trump, repeatedly expressing bewilderment at how “he gets away with it.” She said no other candidate in modern times has been able to say such offensive things, associate with such hateful people, and hold such hateful views, yet still be a viable national candidate. She said one had to go all the way back to George Wallace in the ’60s to find anything similar. She seems to have missed the ’80s and ’90s, when Pat Buchanan’s and David Duke’s candidacies were derailed by hostile media. She ended on a pessimistic note, saying that nothing seems to stop the Donald.

Professor Thomas Grumke, who teaches at a university in North Rhine-Westphalia focused specifically on Germany. His main point was that although “far right” political parties are not doing very well, “far right” social movements such as PEGIDA are. He noted that young people were getting involved, but suggested that this might be only youthful rebellion, and that they may grow out of it. He spoke with great condescension towards anyone who could be attracted to the “far right.” 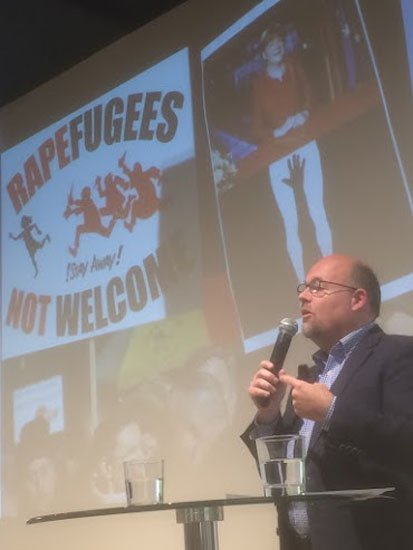 The question and answer period was more interesting than the presentations. A South Asian man stood up and berated the panelists. He noted that no one on the panel represented the Right, or had even tried to understand its perspective. He further noted that “experts” like them had been wrong about everything so far this election, so why should anyone listen to them? At the end, he said he had voted for Le Pen and was a Donald Trump volunteer.

Halfway through the question, Professor Grumke interrupted him, snidely asking, “How can you say I was wrong? We don’t know each other.” As an answer, he sneeringly asked, “Are you an immigrant to this country? Yes? Okay, good luck to you.” The panelists addressed none of his points and immediately took another question.

Professor Grumke [Email him] went on to mock the pro-Trump questioner a few minutes later, saying:

Without a hint of irony, Miss Beirich, whose job is to suppress dissent, lamented that no one talks to people with different viewpoints these days, and that this leads to a loss of civility. She added the usual jab at the racialist right: “We joke in my office that if we could get these people jobs and girlfriends we might be able to neutralize the movement.”

Professor Grumke complained about the Internet:

It has changed everything. It means you can today sit in a remote village in the Alps, and be on your computer and feel part of the great movement. Thirty years ago, you would just sit in your little village in the Alps and be completely isolated. Today, you communicate on Stormfront.org which is really the mother of all racist websites, and you feel fantastic. In your village you are nobody, but here, with the tip of your finger you are part of this “great movement.” And that energizes so many people. I mean here in the US you have these people who live in the basement of their mom’s house, and run this great, you know, “Aryan revolution.” A couple years ago you would just be some sad kid in the basement of his mom’s house.

The audience laughed happily at this caricature.

A member of the audience asked:

Touching on one of the things you said about the internet, and that person sitting in his mother’s basement: The nature of the discussion changes, because they’re able to talk in slogans, and it can mobilize the populist element, which is different from a manifesto that the organized parties may choose to use. You have this undercurrent that’s now able to organize and that may explain these populist movements like PEGIDA, and politicians tap into that. Donald Trump tweets regularly, engaging at that level, the level of slogans, rather than manifestos. Is it perhaps the internet, over the last 20 years, that has taken the discussion out of the organized, hierarchical parties, and put it more at that populist level?

One of the things that has happened in the United States and Europe is the total dethroning of the “establishment media.” The authority of established media across the United States, and I believe Europe as well, has been destroyed. To some extent by our own sins, to some extent by the fact that people have alternatives now, they communicate unmediated, through the Internet. And one of the common elements I have noticed is the hostility directed at the media, at physical representatives of the media.

He talked about a reporter who apparently needs bodyguards when she covers populist rallies in Germany, and that reporters at Trump events have felt unsafe. He then returned to his real gripe:

I think it’s the leveling of access to mass communication. Twenty years ago you had to own a $250 million printing press to have access to the whole world; today, you need a $400 phone and you can communicate directly to the entire world. This has been a tremendous source of energy to populist movements. We, the mainstream media, are weaker than we’ve ever been before, yet we are vilified for controlling the discourse. We’ve never been weaker and never been more hated.

How tragic it must be to feel that you are being beaten by overly emotional, unemployed, basement-dwelling losers with a knack for Twitter. Needless to say, this is what fuels the censorship of the Right on Facebook and Twitter. The panelists blasted Twitter, in particular, and for good reason. Dissidents have long known that Twitter is a more useful platform than Facebook, and Donald Trump’s Twitter feed has become something of a legend, with entire essays about it in Politico.

Besides confirming my suspicion of just how much liberals hate us, and how much they hate the marketplace of ideas that comes with the internet, there was one other highlight. To my surprise, Miss Beirich apparently knows about Robert Putnam’s research on the damaging effects of diversity. She never mentioned him directly, but she must have been thinking of him:

What we know from sociological research is that when a neighborhood diversifies people retreat to their homes, they hunker down. You have to really take serious positive work in rapidly changing demographic areas, to not result in either social breakdown or other problems. It’s a big issue for the United States. On its own, it’s not gonna happen.

On its own, it’s not gonna happen? What is “it”? A multi-culti America? A miscegenated planet? No matter how high the costs of diversity–which Miss Beirich concedes are real–“it” must be had anyway. Since diversity has bad consequences, government must forcibly make it work so America can get to “it.” That’s why we need the Southern Poverty Law Center, “hate crimes” laws, sensitivity training, race preferences, forced integration, “role models,” and the endless lies Americans tell each other about race. Diversity has to be made to work, so we can all get to “it.” And apparently the only thing stopping “it” is losers like us on the internet.

Linda Preston is a former conservative who has finally lost all illusions about race.