Ann Coulter: Will Obama Try To Backstab Hillary To Save His "Legacy"?

n a campaign season with lots of surprises, how's this for a wild prediction? It would never happen, of course, but pull up a chair and indulge me.

My premise is, President Obama hates Hillary Clinton and always has. Why?

(1) Because everyone hates Hillary;

(2) Obama has special reasons for hating her based on the things she has done and said;

(3) His senior adviser, Valerie Jarrett, also hates Hillary, so, if by some accident, Obama wakes up one day not hating Hillary, Jarrett is there to say, Oh yes you do!

Obama must be having withdrawal symptoms as his second term draws to a close. If he were Reagan, he'd just want to go home and chop wood. But he's not Reagan. The most powerful man in the universe is about to become just some schmuck in an airport. And he's got Valerie Jarrett chirping in his ear, You need to protect your legacy!

Who more perfectly encapsulates white privilege than Hillary Clinton? Hers was a charmed political life. She rose to political power in the draft of her husband, was given infinite breaks, then ruthlessly fought Obama for the nomination, long after it was clear she was not the Democrats' choice in 2008.

While the rest of the world assumes Hillary used a private server as secretary of state to hide her emails from the media or congressional investigators, Obama and Jarrett know that the private server was to prevent them from finding out what she was up to.

There was always the sneaking suspicion that Hillary was keeping her powder dry to challenge Obama in 2012, as Teddy Kennedy had challenged President Carter. On this theory, it wasn't FOIA requests Hillary was worried about, but the prying eyes of Valerie Jarrett.

Obama ordered Hillary not to hire Sidney Blumenthal because of his association with the worst of the Clinton years. As we now know from their constant chattering on email, Hillary effectively hired Blumenthal anyway.

Obama also has to worry that if Hillary were elected, she'd undo everything he's done. She was the health care expert. As Obamacare goes into effect and the catastrophe expands, he can imagine Hillary heading to Capitol Hill to say, Obama, bless his heart, tried to move health care forward, but this novice had no idea what he was doing.

It's a nightmare! Only Biden can be trusted to be the protector of Obama's legacy.

So what if instead of sitting back watching Bernie and Hillary's frenzied battle to the death, Obama could contrive to give the nomination to a guy he likes? What if he could force Hillary to drop out? What if he could snooker the Republicans—not hard!—into confirming his Supreme Court nominee?

It might go like this. FBI Director James Comey releases his report on Hillary, recommending indictment. Obama comes out and gives a fiery speech denouncing the report and firmly standing by her. Meanwhile, Valerie Jarrett is on the phone to Loretta Lynch, saying, Disregard everything the president is saying about Comey, if you get my meaning, Loretta ... 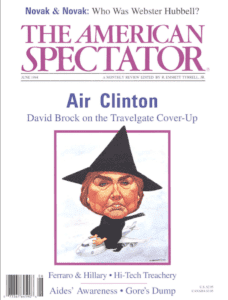 Lynch, contrary to the well-worn practice of Democrats never indicting Democrats, proceeds to indict Hillary. Obama is indignant, makes vague threats, provoking Republicans to rally around Lynch, as the brave Democrat who defied her party to kill the Wicked Witch.

Obama's hands are tied! He can't pull a Saturday Night Massacre. But he grudgingly says he will make the best of it. He withdraws his white-guy fake-nominee to the Supreme Court and replaces him with Lynch. Republicans, overjoyed at Hillary's indictment, confirm Lynch to the high court (where she proceeds to vote in lockstep with Ruth Bader Ginsburg).

The Democrats' presidential race is in shambles. They can't run a crazy old Marxist for president. Obama steps forward and gives his blessing to a Joe Biden-Elizabeth Warren ticket. Biden, having mounted one presidential bid plagiarizing Neil Kinnock, will mount a second one plagiarizing Obama.

The super delegates are overjoyed! Biden is the nominee and Loretta Lynch is headed to the Supreme Court.

Once this switcheroo is done, the Clintons would retreat to Chappaqua, in a white-hot rage, finally consoling themselves with raking in money from speeches at half a million dollars a pop. They'll be in for a big surprise. The going rate for guy whose wife is about to be president is much higher than for an aging rapist whose wife is facing criminal charges. Ask any speakers bureau.

Naturally, this would never happen. American politics is so stolidly predictable. This year, especially, is not one where crazy things keep happening.

It's madness to think that a man of Obama's characteristic integrity would act with such duplicity.

He was absolutely straight with us about the program to transfer guns to Mexican drug cartels, known as "Fast and Furious."

His IRS was never caught engaging in political witch hunts.

As we know from foreign policy aide Ben Rhodes, the administration was stunningly transparent on the Iran deal.

Most famously, Obama kept every single promise on health care he ever made.