As America braces for the annual fawn-fest on Martin Luther King Day (January 15), it’s worth noting that a recent revelation from the FBI archives might have threatened King’s hallowed status—if it had been honestly reported.  But coverage in the Washington Post in particular exemplified what President Trump calls “fake news.” 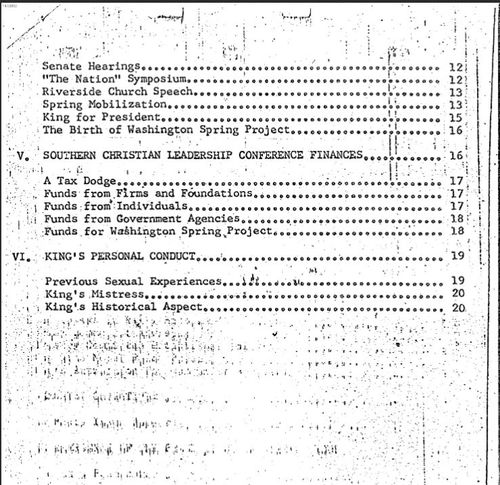 The 20-page classified document confirmed what some historians and biographers have gingerly tiptoed around. It revealed the extent to which the FBI monitored King’s activities, using informants and wiretaps under the authority of Attorney General Robert Kennedy. It listed by name several of King’s close associates who had Communist ties. And it contained details of MLK’s sexual jaunts.

Known Communists who were close associates of MLK included Stanley Levison, once a top financial supporter of the Communist Party, USA (CPUSA), Hunter Pitts “Jack” O’Dell, a former National Committee member of the CPUSA, and Bayard Rustin, a former advisor to King, who was arrested in 1946 “for offering to commit a lewd or indecent act” and who maintained close ties to several Communist party members.  Individuals involved with King’s organization who had Communist “affiliations” included Levison, Clarence Jones, Harry Wachtel, Cordy T. Vivian, Randolph Blackwell, O’Dell, Lawrence Reddick, and Rustin.

The FBI “analysis” provides an overview of King’s activities during the mid-1960s: details on funding sources for the Southern Christian Leadership Conference (SCLC), King’s anti-war activities, and an attempt by “fringe” political activists who encouraged King to run for president.

Post reporter Kristine Phillips quotes historian and King biographer David Garrow [Email him]as saying that “the explosive allegations in the document are neither new or true.” Yet, weirdly, this is the same historian who laid out in considerable detail [Atlantic Monthly, July-August 2002] King’s close association to the former chief fundraiser of the Communist Party-USA. (Allan Ryskind’s article in Human Events from February 24, 2006 offers one of the best summaries of King’s connection to Levison and other Red associates.)

The efforts to pin King as a Communist came at a time when the country was still reeling from fears of Communist subversion, which had reached a feverish pitch when Sen. Joseph McCarthy rose to national prominence in the 1950s with his probes to expose alleged infiltration in the federal government. 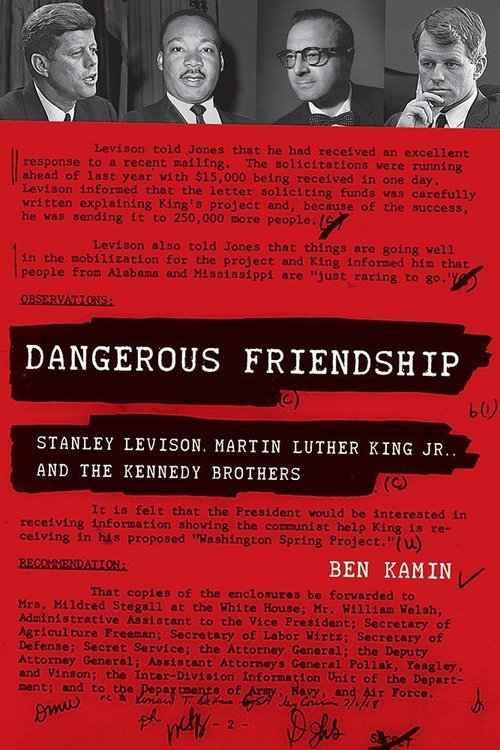 Phillips is perhaps too young to remember the Cold War and likely unfamiliar with Stan Evans’ landmark work on Senator McCarthy, Blacklisted by History, which substantiated McCarthy’s claims of Communist subversion in the upper echelon of the U.S. government. The FBI had justifiable concerns about King’s activities and close advisors.  The mid-twentieth century was a volatile era—urban rioting and unrest, the Vietnam War, the threat of Soviet expansion, Cold War espionage, the proliferation of subversive movements to foment domestic turmoil, and the potential for radical operatives to co-opt the “civil rights” movement and provoke revolutionary change in American society. Under Hoover, the FBI effectively protected the nation from foreign and domestic threats

Subsequently, the Washington Post ran article in the Metro Section, Hoover on King: ‘Beginning to Get His Just Deserts,’ (by Michael E. Ruane, December 20), reproducing a personal letter that Hoover wrote in November 1964 to then-assistant FBI director William C. Sullivan. In the letter, Hoover thanks Sullivan in the letter for his congratulations on hosting an informal gathering with Washington women reporters, and with regards to King:

I share your view in thinking that his exposure is long overdue and maybe he is now beginning to get his just deserts. I certainly hope so…. It is grand to know that I have the support and goodwill of my close associates in the Bureau. 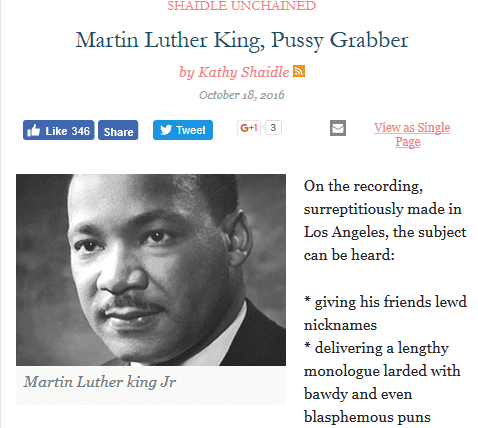 Once again, Ruane portrays J. Edgar Hoover as the villain and King as the victim. He avoids any mention of the newly-released FBI report, reported in his own paper the previous month. However, it contains this whopper: “No serious links to communism were uncovered, but hints about King’s sexual dalliances allegedly were.”

But King’s links to Communists are no longer in question. Neither is King’s awareness that key advisors, such as Levison, were active party members for years.  King biographer David Garrow wrote in his 2002 Atlantic Monthly article;

The information that Jack and Morris Childs [Morris was the second highest ranking CPUSA official before becoming a double agent] furnished the FBI, from 1952 to 1956, about their repeated face-to-face dealings with Stanley Levison concerning CPUSA finances establishes beyond any possible question that Levison in those years was a highly important Party operative. Given how richly detailed the Childs brothers’ evidence about Levison actually was, the new and unredacted information merits an airing at some length.”

Garrow described how the Childs’ information and FBI wiretaps document Levison’s role as a top financial officer in the CPUSA during the 1950s. John Barron’s Operation Solo: The FBI’s Man in the Kremlin thoroughly details Morris Childs’ work as a double-agent.

A few years ago appearing on NPR’s “Fresh Air” program [April 4, 2014], Todd Purdum [Email him] author of An Idea Whose Time Has Come: Two Presidents, Two Parties and the Battle for the Civil Rights Act of 1964, downplayed Levison’s membership in the Communist Party, “what J. Edgar Hoover never told the administration is that by this time [early 1960s] the FBI had evidence that Levison had completely stopped his financial support for the Communist Party of the United States and instead had transferred his efforts to Martin Luther King’s own crusade.” But in his 2014 book, Dangerous Friendship: Stanley Levison, Martin Luther King Jr., and the Kennedy Brothers, Ben Kamin [Email him] notes that Levison never wavered in his fundamental Communist beliefs:

Not only had he been a tireless leader, fund-raiser, and advocate for the CPUSA for decades, he remained a Marxist at heart. His departure from the Party by 1956 was a technical matter, though grounded in a conviction about the hypocrisy and violent duplicity of the Soviets.

Imagine for a moment the reaction of media luminaries if President Trump replaced his chief of staff with a former Klansman. It would not be: “Well, Billy Bob is no longer the Grand Dragon for the state of Mississippi, he’s now promoting Trump’s own crusade.” Fat chance! The “hive,” led by the SPLC and drive-by media, would go into unrelenting crucify mode.

As Donald Vroon, the independent minded editor of American Record Guide put it:

Intelligent people bristle when even our orchestras treat ‘ML King Day’ as a major occasion. We don’t even celebrate Beethoven’s birthday! What has ML King to do with our music? Nothing at all. Why, then, this unseemly prostitution every year? To get black people into the concert hall? Ridiculous! They are not coming, and we’ve been fawning over Dr King for a long time.

The celebrations will commence, fake news will flourish, King’s warped legacy will percolate, violent crime will continue to plague Chicago, Baltimore, Ferguson and other urban areas, and guilt-ridden, middle-class whites will take in orchestral concerts in order to feel good—until the truth sets us free