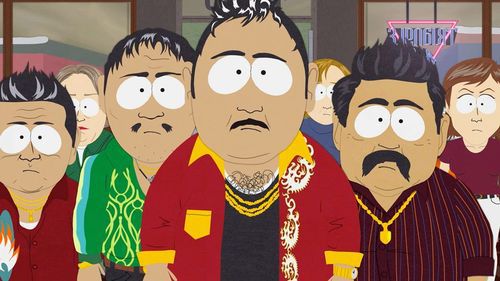 All this millennium, I’ve been banging on in VDARE.com about the links between immigration and crime families. But even I was surprised when I ended up on the jury in a trial that so perfectly exemplified what I’ve been saying that it sounds like I made it up.

Although this tax fraud trial in downtown Los Angeles was a VDARE.com column come to life, one thing I did learn was that you don’t have to be a criminal mastermind to make millions in white-collar crime.

Unlike on Law & Order, real trials are not crackerjack battles of wits. This one plodded on for a couple of weeks, but it did get more amusing when the defense went on the offense.

The defendant was an Iranian immigrant with a shaved head and a goatee. He lived in Orange County‘s idyllic seaside suburb of San Clemente.

The colorless prosecutors laboriously demonstrated that charged man had legally registered himself as president and owner of a used car lot in a Latino part of the vast LA megalopolis. Over a three-year period, his dealership had collected $4 million dollars in sales tax from customers, but had only sent $2 million on to the state, thus stealing $2 million, tax-free.

There was just one little flaw in the accused’s otherwise perfect plan: lots of other people had tried to pull this same fast one since California started collecting sales tax in 1933. So the state government employs accountants who check up on businesses to make sure they are forwarding all the sales tax. The auditors kept asking the CEO and his bookkeeper, another Iranian, why, according to the tax records they had sent the state, all the used cars had been sold for just a fraction of their Kelley Blue Book values.

Eventually, the dealership had gone out of business and now the CEO was in the dock.

So, maybe it wasn’t such a perfect plot, but … Whose scheme was it, anyway?

The preening defense attorney’s claim was that, well, sure, his client had signed all sorts of official documents proclaiming himself to be the owner and chief executive of the car lot, but he wasn’t really the man in charge.

See, the defendant was just fronting for his brother-in-law, who actually ran the business while the defendant was merely responsible for deciding what repairs should be done on the cars and which repair shops would do it. This hidden partner paid the defendant $60,000 per year in salary, while he kept all the profits.

The defense passed around 8" by 10" glossies of the new house on a golf course in San Clemente that the brother-in-law had built and decorated for himself and his wife, the defendant’s sister. And decorated is the operative word. A year later, I was reminded of this gaudy Persian palace when I saw South Park’s parody of 300, the hit movie about the Battle of Thermopylae. In it, the invading Persians, dressed in gold chains, silk shirts, and designer sunglasses, want to take over South Park and redecorate the Les Bos bar with the kind of "customized Gucci accessories which only a Persian would think were cool."

Meanwhile, we learned from the defense, the poor defendant had to make do living in the 2400 square foot home he had long owned in San Clemente (market value at the time: seven figures).

The defense put on the stand the defendant’s siblings to talk about how he was "just a simple man" who, back in Iran, had merely graduated from high school. (That, by the way, would make him above average among Los Angeles Unified School District students). He could never come up with or operate such a sophisticated swindle himself.

So why the charade?

Because, we learned from the defense’s own witnesses, the defendant’s brother-in-law was a notorious crook, with such a long history of fraud that he wasn’t allowed to work in the used car business anymore. (Think about that for a second.)

Where, you might ask, is the genius brother-in-law now?

Well, after about a year and a half of the state sales tax auditors questioning the nominal CEO, the hidden partner had fled back to Iran. (Just before making a run for the border, he took out long-term leases on five new cars, and then sold them for cash.) The U.S., not surprisingly, doesn’t have an operative extradition treaty with Iran, so he’s home free.

The defendant’s sister, the abandoned wife of the fugitive hidden partner, lamented on the witness stand how she had to sell the new house and move with her two children into the house owned by her brother. Her parents were already living there, so now there are six people sharing merely 2400 square feet! (And not on a golf course either, let me add.)

The defendant’s older brother, a CPA with an MBA, explained that he had decided during the used car lot’s first year of operation to wash his hands of keeping their books.

In the closing arguments, the defense asserted that the defendant was the real victim. The prosecution pointed out that he had admitted on the witness stand to having knowingly signed the legal documents taking responsibility for the dealership.

Clearly, the arrested man wasn’t the prime mover in the crime, but equally clearly, he had made the crime possible by taking legal responsibility for his con man brother-in-law’s surreptitious return to the used car business.

If you don’t want to do the time, then don’t sign on the line.

Being on a jury for a long trial is a strange experience because you aren’t allowed to talk about the trial while it’s going on. You finally get into the jury room and find out that … your fellow jurors just don’t get it.

The vote was 11-1 for acquittal from the beginning and it stayed that way to the end three days later when a hung jury was declared. I made sure the defendant could never say he had been acquitted, but that was all the satisfaction I could get out of the experience.

Why did 11 jurors vote to acquit?

First, dullness. Many didn’t have the mental capability to synthesize into a coherent narrative of cause and effect the pointillist data that emerges over the protracted course of a trial. White-collar crime cases, where many of the witnesses are auditors, are particularly tedious, disjointed, and, by their very nature, misleading. Nobody else on the jury had figured out during two weeks of testimony what was going on.

Second, laziness. Nobody else saw it as his or her duty to figure out what the story was. If the prosecution didn’t explain it to them well enough for them to understand it, they weren’t going to think about it.

Third, bias. Several of the jurors were immigrants themselves, and the most energetic spokesman for the defendant, a Bulgarian immigrant, turned out to be a used car dealer himself! He seemed to take the whole case rather personally.

"In April, I shopped for a contractor to paint my house trim. I got three bids. One was for $1,600, about $400 less than the others. The only condition was that payment be in cash. That wasn’t remarkable. Is there a Californian alive who doesn’t know they can pay under the table for cheap immigrant labor? You pay cash. There are no checks. There is no tax record."

"But this bargain didn’t come from an undocumented worker. It came from an established businessman with good references. … He vented: ‘If I’m going to stay in business, I have to do what the illegals do. They never pay taxes, on profits or on their employees’ pay. Right there, I’m at a 20% disadvantage.’"

In Los Angeles, immigrant businessmen from the Middle East (like the defendant) and from ex-Communist countries (like the Bulgarian juror) are particularly inclined toward the gray market. They come from countries where you can’t trust the government to enforce contracts fairly. You can only trust your family. So, you bring your whole family to America and keep operating just like you did in the Old Country.

The size of the untaxed economy is big and growing. Dickey wrote in 2003:

"A study last year by the Economic Roundtable, a Los Angeles research group, found that the underground sector in Southern California probably accounts for 20% or more of the economy, says economist Dan Flaming, author of the report."

The newsman pointed out that this plays a large role in the state government’s recurrent fiscal disasters (and, by the way, there is a new one now underway in California right now):

"As the underground sector surged in the ‘90s, an unpleasant snowball began to gather mass. The amount of tax revenues generated by the economy didn’t keep pace with the population growth and accompanying rise in demands for government services."

Having served on this jury, I’m not at all surprised that California is Ground Zero of subprime disaster that’s taking our country into recession. To a significant extent, it’s driven by mortgage fraud. Diversity is strength, as we all know, but it’s also fraud—and a failing jury system.