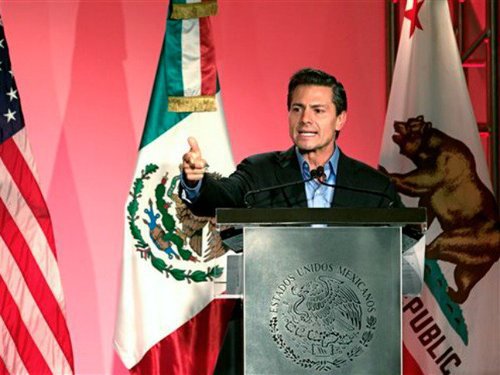 Pena Nieto speaks in California: "This is the other Mexico."

In 1967, while on an official visit to Canada, French President Charles de Gaulle delivered a speech from a Montreal City Hall balcony and shouted: “Vive le Québec libre! "

This was immediately seen as deliberate interference in internal Canadian politics. After all, it took place in the midst of ongoing controversy over whether French-speaking Quebec should be independent of Canada.

Canadian Prime Minister Lester B. Pearson sternly defended Canadian sovereignty in an official statement on television, declaring that “Canadians do not need to be liberated.” This statement was also sent to the French Embassy. Even some Frenchmen who supported the cause of Quebec regarded de Gaulle’s outburst as inappropriate.

Within a few days, President de Gaulle cut short his visit and flew back to France.

No self-respecting country allows a foreign head of state to create ethnic unrest and claim jurisdiction over citizens and territory of the host country. Yet that is precisely what President Enrique Pena Nieto of Mexico just did in California—and the Republican Party was utterly silent.

The Mexican President was in California August 25-26 visiting Los Angeles and Sacramento. The trip followed California governor Jerry Brown’s July 27-30visit to Mexico, where Governor Moonbeam gleefully promoted the Reconquista of his state and signed “bilateral” agreements with a foreign nation as if California was independent.

But Jerry Brown and Pena Nieto evidently felt they hadn’t done enough to sabotage American independence, so they reunited a month to later to declare their solidarity against Americans. Nieto particularly condemned other American states who still “skimp[ed] on recognition” of illegal aliens. He warned,

Those who still believe and bet for the exclusion and discrimination or the rejection of diversity… I only have one thing to say: the future, and a very near future, will demonstrate your ethical mistake. Time will show we’re right. [Mexican President Calls for Immigration Reform, AP, August 26, 2014]

What does this blunt pronouncement of demographic “Might Makes Right” mean in the real world?

Well, Pena Nieto made it plain – “This is the other Mexico,” he said of the United States.

He made this triumphant pronouncement as he spoke in Spanish before a crowd of several hundred at the Millennium Biltmore Hotel. El Presidente “entered a ballroom alight with the colors of the Mexican flag to thunderous applause and shouts of "Bienvenidos!" [Mexican President Enrique Peña Nieto on L.A. visit,by Kate Linthicum and Tiffany Hsu, Los Angeles Times, August 25, 2014]

As Ann Coulter has asked, When Did We Vote to Become Mexico?

And why is it somehow wrong when immigration patriots point out what is happening—but worthy of celebration when the President of Mexico boasts about it?

The day President Nieto left California, his website bragged that México tiene en California un sólido aliado[“Mexican has in California a solid ally”). It certainly looks that way, doesn’t it?

We can’t say we weren’t warned about President Nieto. And his arrogance is hardly a departure from other recent Mexican Presidents:

This Mexican meddling is bipartisan. Presidents Zedillo and Nieto are both from the centrist Institutional Revolutionary Party (PRI) while Fox and Calderon hail from the “conservative” (by Mexican standards) National Action Party (PAN). But seemingly all parties in Mexico agree that you can interfere in American affairs without consequences.

The real question – where is the Republican Party? Republican leaders seem ready to go to war over the borders of the Ukraine, but they are pathologically indifferent about Mexico’s interference with our own sovereignty.

You would think the GOP would take up the issue if only to use it cynically in the elections.

Of course, they are hopeless at winning elections.