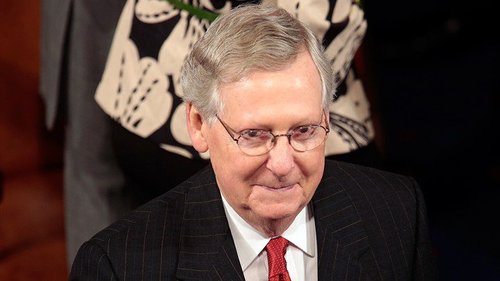 Senate Majority Leader Mitch McConnell:"the Senate will finish its work on trade this week" whatever the voters want.

Fresh from throwing the fight against Obama’s Executive Amnesty and voting for Amnesty-supporting AG Loretta Lynch, Senate Majority Leader Mitch McConnell has indeed ridden to the rescue of the Trans Pacific Partnership managed trade deal: McConnell vows to pass trade bill, by Vicki Needham and Jordain Carney, The Hill, May 18, 2015.

The Hill story does report:

The Texas Republican has an amendment that would ensure nothing in TPA changes immigration law, while also blocking any trade agreements that change immigration laws from being fast-tracked through Congress.

Trade deals containing immigration provisions could be amended and would be subject to Senate filibusters.

“Since the Obama administration has emphatically argued that TPA will not affect immigration, it should support this amendment, which makes that promise explicit,” Cruz said.

Recently, I recounted in Fast-Tracking TPP, The Danger Of Informal Immigration Deals, And The Need For Treason Trials how in 1990-91 an advisor to British Prime Minister Thatcher expressed astonishment to me that Bush aides had casually told him they had informally promised the Mexicans that the U.S. would tolerate increased illegal immigration to accommodate the Mexican farm laborers who would be thrown off the land if Mexico gave up its corn price supports under the North American Free Trade Agreement, which U.S. agribusiness demanded. Of course, this was diametrically opposed to what credulous GOP voters were being told by the Wall Street Journal Editorial page etc.: that free trade would reduce illegal immigration, because it would boost Mexico’s economy.

Here’s more reason to be suspicious, which I meant to add to my original post. For some reason, a Leftist site called Campaign For America’s Future has kindly put me on its email list. On December 10 last year, it posted Immigrant Groups Warn Fast Track/TPP Could Cause More Migration North by Dave Johnson:

On a media call today, several immigrant rights leaders talked about the relationship between “NAFTA-CAFTA-Style” trade deals and the number of people forced to immigrate north to the U.S. They worry that the massive Trans-Pacific Partnership (TPP) will move jobs from Mexico and Central America to lower-wage Asian countries like Vietnam….the opposition is based on an unintended consequence of the NAFTA and CAFTA trade deals. While these deals costs jobs and factories in the U.S., they also devastated small farms in northern Mexico, causing a massive forced migration northward. This has resulted in tension in the US over immigrant rights. The proposed TPP could displace an estimated 1.2 million workers in the CAFTA countries and Mexico, resulting in more migration northward.

This further confirms the displacement effect that my British friend identified back during the NAFTA negotiations. It’s a measure of how great the threat must be is that the Left, which normally tries to ignore the impact of immigration on workers, is speaking out. You can see the tension is this helpful union press release: How U.S. Trade Policy Has Contributed to Mass-Migration to America.

My question: what kind of informal promises are Obama Administration negotiators now making to accommodate this prospective displacement? This is a drawback even worse than the formal immigration commitments that Cruz is rightly opposing.

In a better-governed age, America had the Dillingham Commission to investigate the impact of immigration before legislating the 1924 cut-off. There has been nothing like this during the current Great Wave of immigration, which means he Historic American Nation will now have to conduct treason trials to find out who was responsible for its post-1965 Immigration Disaster.

Those Bush aides (Karl Rove?) will be in the dock alongside malefactors like exhumed JFK/ LBJ aide and 1965 Immigration Act architect, Norbert Schlei.

Will Obama’s trade negotiators be there too?