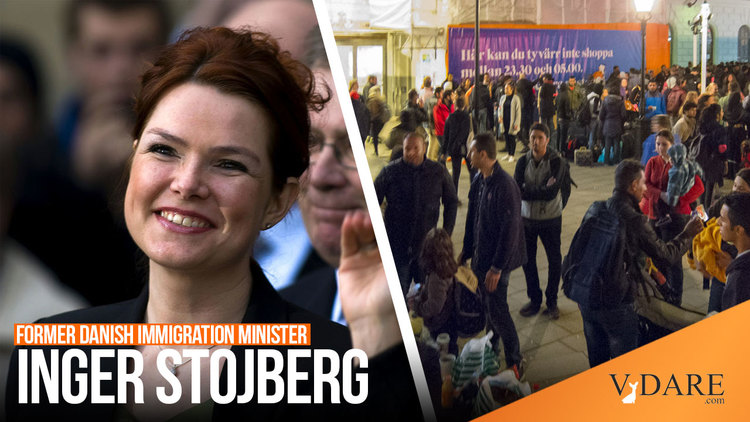 This is similar to what they are trying to do to Italian leader Matteo Salvini. He faces a trial for "kidnapping" because he detained invaders who had no business being in Italy, or Europe, at all.

Similarly, Denmark is going to imprison a former minister for not providing enough facilities for invaders.

A Danish politician behind some of Europe’s strictest immigration policies will be jailed after she was found guilty of breaching her duties by illegally separating refugee couples.

Former immigration minister Inger Stojberg, 48, was sentenced to 60 days of unconditional imprisonment, Denmark’s impeachment court ruled on Monday. Lawmakers will now decide if Stojberg, currently serving as an independent member of parliament, is unfit to hold her seat until the next election, due to be held no later than June 2023.

The verdict highlights changes in the Nordic nation which was ahead of much of the rest of Europe when it embraced anti-immigration policies at the beginning of the 2000s.

In 2016, Denmark separated 23 refugee couples upon arrival on Stojeberg’s order which was later deemed unlawful by the parliament’s ombudsman as it failed to acknowledge that couples have the right for individual assessments.

"Getting to Denmark" was promoted by Francis Fukuyama as something of the End Stage and Meaning of History. Denmark, a successful social democracy, seemingly solved the problem of creating effective, modern political institutions [How to Get to the End of History, by Ian Morris, Slate, May 1, 2011].

However, "getting to Denmark" has taken on a new meaning as migrants from the Third World besiege Denmark. Stojberg defended her conduct, saying she was trying to prevent young women from being forced into marriages with much older men. Unfortunately, on the Pokemon Points Victim Scale, Third World women rank below the social imperative of getting as many non-Danish people into Denmark as possible to make the country worse. After all, what is the suffering of Third Worlders if they can't be used to extract resources from whites?

Denmark is an interesting case because it was the Social Democrats who, logically enough, decided that defending the existing welfare system for citizens was the best way to defeat the "far right," meaning people who don't hate themselves.

It worked for a while. Yet social democracy has a suicidal internal logic. Once you are enmeshed in various international treaties and agreements that give invaders more rights than citizens, you find yourself in anarcho-tyranny. The premise of the system is taking care of the victim and defending equality, which necessarily leads to inventing new categories of victimhood and importing more resentful, hostile people who can be trusted to vote for certain parties. It is the invader who arrives on your shore who has state power, not the minister who supposedly can defend the border.

Again, this raises the question of whether it is better to be an illegal than a citizen—and whether members of the developed world will ever realize that they should stop propping up a system that inevitably mandates their destruction.

Anarcho-tyranny, as Sam Francis, understood, isn't just some wacky liberal extremism. There is nothing more sickening than conservatives sighing about liberal extremism or hypocrisy as if it is unexpected, extreme or unfair. It is the System working exactly as intended and it can work no other way.

It is the inevitable result of multiculturalism, and, arguably, of social democracy. "Progress" towards the End of History is a lie. In the Winter of our Civilization, there's just degeneracy until collapse, until a new social order more in line with Tradition can be created [The Fallacy of Progress, by Kerry Bolton, Counter-Currents, October 25, 2018].