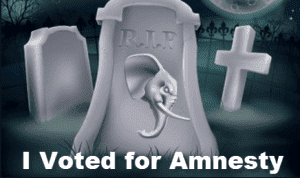 Increasingly I am finding the Twitter feed maintained by Daniel Horowitz the most efficient source for key political developments. (You do not need a Twitter account to read it.) From here I learned today that Horowitz has been allowed back onto Breitbart for the first time in over 3 months to post 29 Conservatives Can Oust Boehner as Speaker 2 Jan 2015

It would only require 29 House members to depose current Speaker John Boehner. With this leverage, conservatives could negotiate significant reforms from a successor who emerges on a second or third ballot, thereby restoring the mandate given to them by the electorate on November 4…

A group of 17 progressive Republicans orchestrated a similar stratagem in 1923, whereby they blocked the party’s nominee from securing a majority for nine consecutive ballots until the party leadership agreed to implement some of the reforms they were suggesting…

The operative point here is that it is not sufficient to garner a plurality of the votes; the winner must secure a majority of the total number of votes cast… To be clear, there is zero chance of Pelosi becoming Speaker because she would never win more than 188 votes, far short of the majority of the House body.

Republican voters nationwide overwhelmingly want their House representative to elect somebody other than Rep. John Boehner (R-OH) as Speaker of the House, a new poll from Pat Caddell’s organization Caddell Associates shows.

A whopping 60 percent of voters who voted for Republicans in the last election either definitely or probably want their member of Congress to elect someone other than Boehner on Jan. 6, when Congress convenes,

(Tellingly, the GOP Establishment minions at National Review have spun this as New Poll Shows Tepid GOP Support for Boehner in Role of Speaker)

With admirable professionalism, Horowitz reported “Editor of RedState” (from which of course he was summarily evicted this past summer) Erick Erickson was privileged with subbing for Rush Limbaugh today and intended to interview Jim Bridenstine R-OK (who has announced he intends to vote against Boehner).

This motivated me to look what the powerfully-promoted RedState (Alexa ranking #5,686) has done to mobilize its declared base of “Right of center Activists” for Tuesday’s vote.

Erickson, who can actually think, was provoked by the CRomnibus disaster to publish House Conservatives Have the Power and Should Depose Speaker John Boehner December 16th 2014 which lays out the situation perfectly:

House conservatives must summon the courage to oppose Boehner’s nomination on the floor in January. It is a moral imperative. You cannot consistently complain about Leadership’s many failures—and the treachery involved with a Speaker fresh off a successful wave election conspiring with President Obama to fund amnesty and enjoy a celebratory phone call in the aftermath—and then vote for him to continue in this role….

Think of it as a Supreme Court nomination that needs to be confirmed by the Senate. When the Senate rejects a President’s nominee, it forces the President to go back to the drawing board and nominate someone new that is acceptable to the Senate. The Republican Conference would do that in this analogy by nominating someone that would not be vetoed by the 30.

This is also why the 30 would not need to be unified on who they wanted to replace Boehner… if you veto Boehner and throw it back to the conference, with a willingness to stand firm on future bad options, House Republicans will eventually gravitate towards a real conservative who is well liked by many Republicans. It may take some time, but it will be worth it.

Subsequently: dead silence, on this and the Administrative Amnesty in general. Erickson did smuggle a reference into his Cuba capitulation discussion the next day

…the Cuban embargo is enforced mainly with six statutes

I said just a few weeks ago that if the congress did that, it would embolden Barack Obama on a host of other foreign and economic policy matters.

But otherwise in familiar Commissar Leon Wolf style the subject has been repressed.

Erickson shamefully had to join the rest of the RedState crew reporting for duty as a prospective lynch mob over the ridiculous Scalise/White Nationalist hysteria. (He groveled

David Duke is the reasons I am no longer a resident of Louisiana. After supporting Edwin Edwards in the gubernatorial race against David Duke in 1991, I knew I had to get the hell out of a state where those were the two most popular choices.

I moved to Georgia to go to school and could only now consider moving back thanks to the hard work of Governor Bobby Jindal.

How Do You Show Up at a David Duke Event and Not Know What It Is?  RedState December 29th 2014)

If RedState had revisited the Speakership vote as often as have Daniel Horowitz and his associates at the Alexa-unrated Conservative Review (or if Horowitz were still allowed to write at RedState) Boehner would be a great deal less complacent this weekend.

But the reality is clear: RedState is Boob bait. At best, Erickson is a becoming a younger, beefier George Will.

VDARE.com thinks it is time Rush Limbaugh found a more authentic voice to benefit from the invaluable publicity of being his substitute host. How about Daniel Horowitz himself? Of if having Talk Show experience is required, what about Laura Ingraham?