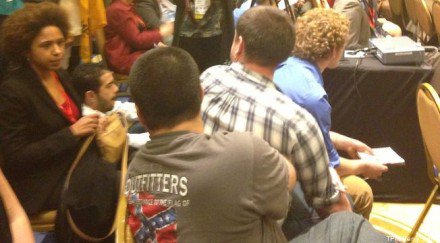 The 2013 Conservative Political Action Conference's carefully managed image collapsed on Friday, as some attendees and speakers went off the reservation.

The morning began with reality-television-star-turned-conservative-celebrity Donald Trump addressing the audience in the main conference room. The American Conservative Union (Al Cardenas, conquistador-in-chief) had responded to criticism of its decision to host him by bragging that ticket sales had increased after the announcement that he was coming. However, it was certainly not happy after hearing what he had to say.

Trump launched a blistering attack on Amnesty for illegal immigrants, calling it a “suicide mission” for Republicans. “Every one of those 11 million people will be voting Democratic,” he cried. He also called for bringing in more high-skilled immigrants—especially from Europe, where they are “hard working” and “tremendous.”

Trump went on to demand that America rebuild its manufacturing capability and heaped scorn upon Apple for putting all of their factories in China. “China should be more proud of Apple than we should,” he said.

Of course, Europeans are the wrong kind of immigrants and Americans are not supposed to have jobs anymore. There was much wailing and gnashing of teeth from the Congressional Hispanic Caucus—one of those organizations that by its sheer existence validates the existence of VDARE.com. Its chairman, one Ruben Hinojosa of the soon-to-be-subverted state of Texas, was very unhappy that Donald Trump had expressed moderately pro-American sentiment: he moaned to The Hill that “[Trump's] bigoted comments at CPAC have no place in the discussion for realistic solutions to our country’s immigration problems.” Hinojosa wailed about “extremist rhetoric” before calling for “responsible, reasonable colleagues” to further help him dismantle the country he is occupying. [Trump criticized by Democrat for ‘bigoted’ immigration message,  By Jonathan Easley, March 15, 2013]

Other conservatives are sneaking into CPAC with positive comments. Former Senator Jim DeMint emphasized putting border security first in the immigration debate and stood against calls for citizenship. [Jim DeMint’s Speech at CPAC 2013, March 14, 2013] David Bossie of Citizens United also condemned Amnesty from the main stage, quoting Senator Jeff Sessions to support his case. On Thursday night, Rick Perry tried some talk about outreach, but was booed from the audience.

During Friday afternoon, a “women's panel” focused on “outreach” with the usual suggestions about more minority spokespeople, playing identity politics, and lots of “reaching out.” Your humble correspondent dutifully live tweeted throughout this entire sad affair. Of course, we've heard all of those since the days of Bob Dole and Jack Kemp, and probably before.

Meanwhile, in another room, the grassroots group Tea Party Patriots held a panel entitled (and I'm not making this up) “Trump the Race Card: Are You Sick and Tired of Being Called a Racist and You Know You're Not one?”

As Tea Party Patriots is repeatedly denounced by the Southern Poverty Law Center ($PLC to VDARE.com) and other Left vigilante groups as racist and extremist, it's unclear what they have to teach anyone.

Nonetheless, they fell back on the traditional tactic of finding a black guy (any black guy!) and putting him on stage. A standing-room-only crowd watched one KCarl Smith sell his book on “Frederick Douglass Republicans,” eating up his invocations of Jesus, the Constitution, and Martin Luther King.

One black woman got up and disrupted the proceedings and an argument developed. Things got worse when a student criticized Martin Luther King as a Marxist—quite accurately, if course—to the horror of panel organizers and the delight of progressive MSM. Eventually, the entire room descended into a screaming match. (See CPAC's 'Trump the Race Card' Panel Derailed by Actual Segregationist, by Elspeth Reeve, theatlanticwire.com, March 15, 2013 which quotes Matthew Heimbach of the Towson University White Student Union: "I came to realize over time by reading Republicans of the 60s and 70s that the right-wing is lying to itself…Republicans did switch their policies in the 60s and 70s.... Dixiecrats did switch parties." And also see CPAC Event On Racial Tolerance Turns To Chaos As ‘Disenfranchised’ Whites Arrive  on TalkingPointsMemo, by Benjy Sarlin March 15, 2013, updated 5:11 PM.y

Most importantly of all, it has to make sure its activists and “intellectuals” remain deliberately ignorant—not looking to closely into the real implications of libertarianism, or the history of American conservatism, or the realities of social policy, or egalitarian ideology.