The Washington Post reports that some important suits in the Republican Party are getting antsy about Mitt Romney’s message of immigration enforcement. And even though the WP presents a rather extreme liberal worldview, and has no dissenting views (like what the citizens want), we already know that the growth of Hispanic demography is a scary topic to elite GOPers.

Experts of Hispanic outreach (presumably well paid for their top hispandering creativity) grumble that Romney has emphasized enforcement rather than amnesty, even though polls consistently show that a majority of voters reject rewarding illegals.

Illegal-friendly Republican George Bush comes up for a nostalgia paragraph from the WP, where he is fondly remembered for having an “I love you” attitude toward lawbreaking Mexicans, made memorable by an image of him waving a Mexican flag which was promoted to Hispanics. 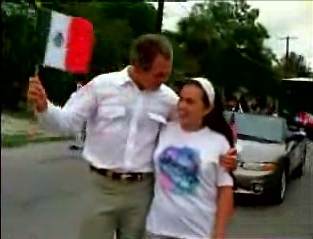 Those were the days, sigh the suits.

Nobody mentions that loyalty based on rewards for lawbreaking behavior would not be very dependable. Plus it would set up an additional precedent for more demands in exchange for votes in the future. Foreign invaders plead for pardons precisely because of the 1986 Reagan Amnesty, famous for all carrot, no stick. And that boondoggle only passed because it was promised as one time only.

Plus, the Mexicans are so obsessed with their imagined importance that they appear oblivious to the principle that illegal is not a tribe, but a behavior. Illegal Irish are just as worthy of a one-way ticket home as the tiresome Mexicans, who love to blow steam about race.

Gov. Romney has an upbeat message for Hispanics, that America is a nation of laws which is welcoming to those willing to respect them:

Republicans are increasingly worried that their party’s efforts to win a competitive slice of the fast-growing Hispanic vote in important presidential battleground states are being undermined by Mitt Romney’s heated rhetoric on illegal immigration.

The leaders of one Republican-leaning group, the Hispanic Leadership Fund, are so upset with Romney that if he wins the nomination, they might withhold an endorsement and curtail plans for an extensive voter-contact campaign in Colorado, Nevada, New Mexico and Florida to bolster the GOP presidential ticket.

Several Republican groups have spent the past three years trying to repair damage from the 2008 campaign, when GOP nominee John McCain won just 31 percent of the Hispanic vote after a bruising primary season in which he was forced to back off his support for a plan that would have put many illegal immigrants on a path to legalization.

Romney, one of McCain’s 2008 rivals, attacked McCain as being soft on the issue. Now party strategists are fretting as Romney — once again — stakes out conservative turf by accusing his opponents of supporting policies that go easy on illegal immigration.

“Romney’s tin ear on this topic, on immigration, will hurt him should he be the nominee, is hurting the Republican Party and is hurting every conservative who cares about passing conservative legislation in the future,” said Mario H. Lopez, president of the Hispanic Leadership Fund.

Another Hispanic strategist on the right, Alfonso Aguilar, executive director of the Latino Partnership for Conservative Principles, added: “It pains me to say this, but if we have a negative narrative on immigration, it’s because of Mitt Romney.”

And Ed Gillespie, former chairman of the Republican National Committee and a leading voice in the party for expanding outreach to Hispanic voters, said Romney’s attacks threaten to overshadow more positive comments the candidate has made — such as in an August debate when he called the United States a “nation of immigrants” and said, “We love legal immigration.”

A spokeswoman for Romney, Andrea Saul, did not respond directly to the question of whether the former Massachusetts governor’s approach might hurt the party among Hispanic voters.

In an e-mail, she pointed to Romney’s remark in Thursday night’s Iowa debate that “those who are here illegally have to get in line with everybody else.” Saul called Romney “a great proponent of legal immigration.”

In a September debate, as Perry was rising in the polls, Romney blasted the Texan’s support for granting in-state college tuition to illegal immigrants as a “magnet” drawing people over the border. “If you’re an illegal alien, you get an in-state tuition discount,” Romney charged.

Perry, in a response widely praised by Hispanic activists but panned by conservatives, said: “If you say that we should not educate children who have come into our state for no other reason than they’ve been brought there by no fault of their own, I don’t think you have a heart.”

Later, after Gingrich expressed support for legalizing some longtime immigrants who have children in the country or other deep ties, Romney waved it off as “amnesty.” He said the 11 million illegal immigrants estimated to be living in the United States need to “get in line behind everyone else” by returning to their native countries and applying for legal status.

Romney’s rhetoric, party strategists worry, risks sending a signal to Hispanics — even those conservatives who are opposed to illegal immigration — that the GOP is not welcoming to their culture.

“It’s critically important for any Republicans who hope to get Hispanic votes that they talk about illegal immigration in a way that does not seem anti-Hispanic,” said GOP pollster Whit Ayers who, with Gillespie, advises the group Resurgent Republic in its efforts to design strategies to help Republicans win over Hispanics.

“Rick Perry does it. Newt Gingrich does it,” Ayers added. “But Mitt Romney is getting very, very close to going over the line.”

The concerns offer a counterpoint to the argument made by Romney and his allies that he is the best-positioned candidate to defeat President Obama next year.

Polls back up Romney’s contention, largely because of his strength among independents. Critics, however, fear that Obama’s campaign will use video clips of Romney’s recent statements in ads targeted at Hispanics and thwart the GOP’s hopes of making gains.

Republican strategists see opportunities to win over more Hispanics — many of whom tend to be religious and socially conservative. The strategists cite disappointment with Obama among some Hispanics because he did not deliver an immigration overhaul and his administration has stepped up deportations. Hispanic communities in Nevada and Florida, to name two key battleground states, have been hit hard by the economy.

Surveys of Hispanic voters in Florida, Colorado and New Mexico by the Resurgent Republic group showed softened support for Obama. The same surveys, however, point to the Republicans’ challenge, showing that Obama remains largely well-liked in the community.

The president, who won two-thirds of the Hispanic vote in 2008, holds a 52 percent approval rating among Hispanics, according to Gallup data from this month — nine points higher than his overall rating and up from as low as 44 percent among Hispanics in late summer and fall.

GOP leaders have hoped that victories in 2010 by several high-profile Hispanic Republicans — Sen. Marco Rubio (Fla.), New Mexico Gov. Susana Martinez and Nevada Gov. Brian Sandoval — might portray the party as a potential home for Hispanic voters or even offer a roster of potential Hispanic running mates for the eventual presidential nominee.

Figures such as former Florida governor Jeb Bush, a fluent Spanish speaker whose wife is Mexican American, have called on the party to temper its language on immigration. Bush is hosting a Hispanic issues summit for the GOP in Miami next month, just days before Florida’s primary.

Party leaders’ goal for the election is to match their 2004 performance, when President George W. Bush used what some of his advisers called an “I love you” strategy to win about 40 percent of the Hispanic vote — unusually high for a Republican. Bush had taken pains to push an immigration overhaul plan that included a path to citizenship for illegal immigrants, drawing fierce opposition from conservatives in his party. In the campaign, Bush used targeted appeals to Hispanics to play up his love of their culture and food, distributing a video to Hispanic voters showing the president waving a Mexican flag.

The GOP strategist who produced that video, Lionel Sosa, now works for Gingrich. He said that Romney’s stance on Perry’s tuition legislation implied that many illegal immigrants “are takers and not givers,” and that his support for forcing all illegal immigrants to leave the country sounds like an unfair blanket policy.

If Romney is the nominee, “I don’t see how Latinos could identify with that,” Sosa said. “It makes it hard for a Latino to be able to warm up to a person that seems to come off unfriendly to a whole population of people.”