Open debate in the West now hangs by a thread—even the social networking site Gab, the libertarian alternative to the increasingly Politically Correct Twitter, is now threatened with outright seizure of its domain for allegedly breaking Australian anti-discrimination laws. This may well be another example of the emerging Cultural Marxism-Big Business alliance: the crackdown comes days after Gab’s anti-trust lawsuit against Google.[ ‘Free Speech Alternative’ To Twitter Doesn’t Last Long At All, Hit With Anti-Discrimination’ Violation, by Ian Miles Cheong, Daily Caller, September 18, 2017] Meanwhile, despite (or because of) a unified Republican government, on September 11 Congress unanimously approved a Joint Resolution which could well provide legal cover for suppressing the entire Dissident Right. Only President Trump, in his inarticulate but undeniably admirable way, offered any resistance.

The Joint Resolution condemned “White nationalists, White supremacists, the Ku Klux Klan, neo-Nazis, and other hate groups,” blaming these groups for the “violence and domestic terrorist attack” that it alleged (despite mounting Narrative Collapse) took place at the Unite The Right rally in Charlottesville, Virginia. It looked like it could have been written by the Southern Poverty Law Center. Perhaps it was. 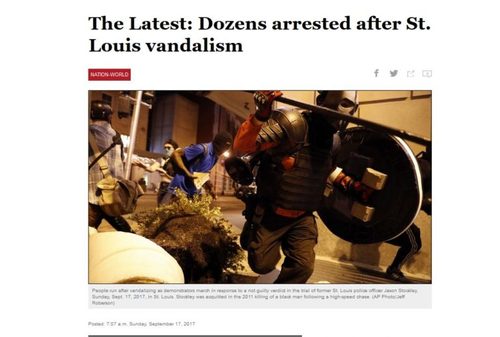 Needless to say, the Resolution did not condemn the Antifa terrorists who actually created the violence in Charlottesville. Indeed, as this is written, St. Louis continues to suffer from riots by Black Lives Matter and Antifa—to the complete indifference of the Main Stream Media. And calling the violence in Charlottesville “domestic terrorism” is utterly irresponsible —suspect James Fields has not yet faced trial and there is good reason to think he will never be convicted of murder.

Yet this Joint Resolution isn’t just empty virtue-signaling. Such a resolution, passed—unanimously—by the U.S. Congress and signed by the President, has the force of law. From a legal standpoint, it is the same as a bill. At the very least, it must influence judicial deliberations. And this Resolution called on federal government to “use all resources available to the President and the President’s Cabinet to address the growing prevalence of… hate groups.” It could well be used to harass whatever organizations are designated as "hate groups" by the SPLC and other Leftists enforcers.

At the very least, the effect (intent?) of this Joint Resolution could be to suppress free speech by threatening dissidents with the prospect of government prosecution. (“Chilling effect,” anyone?)

Examining how some of these specific words in the CJR are used in the contemporary, Politically Correct, U.S. makes clear their potential for abuse. The very term “hate groups” is straight out of the SPLC’s lexicon. The CJR for the first time codifies it as part of Federal law. Therefore, when the government seeks to populate its database of “hate groups,” fulfilling its new legislative mandate, the most expedient resource will be the SPLC, although its abuse of this term is notorious. For example, in 2010 the SPLC designated the innocuous Family Research Council as a “Hate Group.” Immigration patriot groups so designated include the Federation for American Immigration Reform, ALIPAC, and (of course) VDARE.com.

The CJR’s reference to using “all resources available to the President and the President’s Cabinet to address the growing prevalence of those hate groups in the United States…” coupled with the subjective and arbitrary designation of those groups, has the potential for unprecedented police-state style oppression. This is already evident in Western Europe, where citizens discussing among themselves the problems with immigration can be can be indicted by the authorities for proscribed expressions.

The resolution also calls on the President and his Administration to denounce “hate groups” which espouse “racism, extremism, [and] xenophobia.”

The accusation of “racism” is used so indiscriminately that it is extremely dangerous when it appears as a codified term in a government resolution. The term “extremism” is so generic and subjective there is no practical use for it. However, the SPLC makes ample use of this term. It produces “extremist profiles” of people it targets. (This includes VDARE.com Editor Peter Brimelow.) And our Federal government is now obliged classify organizations in a similar manner. 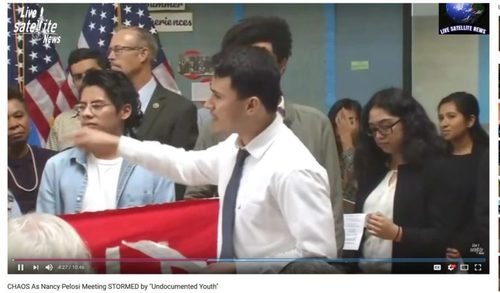 It also seems "xenophobia" is to be a federal offence, however broadly it is defined. Did GOP legislators not remember that Donald Trump himself rode a wave of “xenophobia” to the White House—by expressing the desires of Americans not to have their communities overrun with hordes of illegal aliens?

Of course, by “hate groups,” the legislators don’t mean BLM, Antifa, or indeed any non-white hate groups. Just today, Nancy Pelosi was chased out of her own press conference by demonstrators screaming “Brown Power.” They will no more be condemned than the Black Lives Matter rioters in St. Louis.

Robert Spencer, director of the organization Jihad Watch, says the Left is using Charlottesville as their “Reichstag Fire moment, to crush all dissent”. He goes on:

“They lump us in with the Klan and neo-Nazis, and now, they have the president committing to use all available resources – that’s what the resolution says – against us. There’s no doubt in my mind whatsoever, and I’m sure there’s none in yours, as well, that this will be used against us. The Klan and the neo-Nazis, in reality, are insignificant and negligible forces. This is about us.”

Spencer draws a distinction between “legitimate conservative organizations” and other groups. But such a distinction is meaningless to the Left. What is dangerous about this Joint Resolution is not that it targets too many people, but that it exists at all. It is Herbert Marcuse’s concept of “repressive tolerance,” of intolerance against movements of the Right and tolerance for even the most extreme movements of the Left, given legal form.

The plain fact is that political violence in this country is being driven by the Left. One would expect the Republican Congress, if only out of sheer self-interest, to recognize this. After all, even the attempted mass murder of their own colleagues did not rouse them to action. It’s obviously too much to expect them to act in defense of the nation and of what’s left of our liberty.

But let the record show that President Trump himself defied this Resolution in some small way. He signed the resolution on September 14, but attached a “signing statement.” A “signing statement” is a tool that Presidents have increasingly used to place an interpretation on legislation that might influence its implementation. Thus Trump’s statement said that Americans “oppose hatred, bigotry, and racism in all its forms,” but did not condemn a specific group, obstinately sticking with his contention that there is blame on both sides. [Faced with an up-or-down choice on Charlottesville resolution, Trump chooses third option, by Gregory Korte, USA Today, September 15, 2017]

Naturally Trump is being condemned for this. But his refusal to explicitly endorse Congress’ hypocrisy suggests the president’s instincts, regardless of recent missteps on issues such as DACA, are still fundamentally sound.