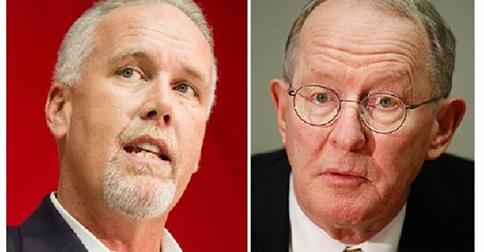 Tea Party insurgent Joe Carr is placing immigration at the center of his August 7 primary challenge against longtime Tennessee GOP Senator Lamar Alexander, 74. Both Carr and the Main Stream Media are aware of David Brat’s stunning victory over cheap labor advocate Eric Cantor, and Alexander’s pro-amnesty voting record is giving Carr plenty of ammunition. The GOP Establishment is digging in, but Carr has already proved that immigration is the issue now driving grassroots Republican politics—and Presidential candidates are going to have to recognize the new political reality.

The “Brat Playbook” suggests that for a candidate to win on the immigration issue, it’s not enough to have a strong stance—you actually have to run on it (as heroic immigration patriot Tim Donnelly, alas, did not in the California gubernatorial primary). But Carr has been pushing the issue from the beginning, saying that Alexander’s vote for the Gang of Eight’s Amnesty/Immigration Surge Bill would be one of his “critical issues.” Still, whatever Carr said or didn’t say seemed of little importance, because he was trailing heavily—until recently.

Unfortunately for Lamar!(as his signs read during his failed 1996 Presidential run), Brat’s victory and Chris McDaniel’s narrow loss (due in part to his ignoring immigration) are feeding into an MSM narrative of incumbent Republicans under attack. Thus, Time Magazine calls Alexander the Tea Party’s “next target” and explicitly compares challenger Carr to Brat.

Like Brat, Carr gathered steam slowly. He won the endorsements of some local Tea Party groups, then gained favor with conservative talk-show hosts. Both hammered the incumbent for supporting “amnesty,” an issue with special resonance as the migrant crisis on the southern border escalates. Both caught the attention of Laura Ingraham, the conservative pundit who campaigned for Brat and endorsed Carr on July 14.

Similarly Slate’s Dave Weigel writes bravely: “One thing Carr learned from the Brat race: The GOP base is more irritable about immigration reform than anyone admits. And unlike Cantor, Alexander actually voted for the Senate’s immigration bill” [Meet Joe Carr, the Last Tea Party Senate Challenger of 2014, Slate, June 14, 2014]

In Tennessee, the local Tea Party is enthusiastically backing Carr. Grassroots groups opposed to Lamar Alexander overwhelmingly identify as part of the “Tea Party,” as can be seen in on pages like “Beat Lamar.” These groups also highlight immigration as one of the main reasons for their opposition. (So far, we have not seen any reports of Border Surge kids being foisted on Tennessee, but Ann Corcoran of Refugee Resettlement Watch reports protests against the idea: Tennesseans urging US Senators to block possible border surge to Tennessee, July 7, 2014 )

And Tea Party groups are hosting Laura Ingraham, whose endorsement was widely seen as decisive in Brat’s victory, for a rally in Nashville on July 22 designed to capitalize on her recent endorsement of Carr.

But all of this supposed support is not translating into tangible financial help for Carr by outside organizations. Many groups are exhausted financially from the failed Mississippi campaign, and, contra the New York Times, have no help to give Carr. [A Tired Tea Party Turns Focus To Tennessee, by Andrea Drusch, National Journal, July 15, 2014]

According to the WSJ, Beltway Right groups like the Club for Growth and the Senate Conservatives Fund have “stayed away from Tennessee.” (Of course, they stayed away from Brat too). As a result, Carr only raised “$217,000 for the three-month period ending June 30. Mr. Alexander's campaign reported raising more than $900,000 in the same period.” The Tea Party Patriots endorsed Carr—but have provided no money for advertising. [Tennessee GOP Challengers Struggle, by Reid Epstein, Wall Street Journal, July 18, 2014]

Even worse for Carr, he is not facing a two-way race. Perennial Tennessee candidate George Flinn is also challenging Alexander. Though Flinn also has a strong border security stance, he is placing Obamacare at the center of his campaign and is sapping Carr’s conservative support. [Exclusive: Suspicion Surrounds Candidacy of Lamar Alexander's Donor 'Friend,' Dr. George Flinn, by Matthew Boyle, Breitbart, April 7, 2014]There is no runoff election, meaning that Carr must defeat Alexander outright in the primary election on August 7.

And Alexander also avoided some of Cantor’s mistakes.

Nevertheless, with all of this against Carr, a shocking recent poll shows Alexander with only a seven point lead over Carr, 43-36 percent, with Flinn trailing at a critical 6.7 percent. Even more important, 10 percent are still undecided. [Joe Carr Spikes in Poll As Laura Ingraham Endorses, by Charlie Spiering, Breitbart, July 14, 2014]

And that was before Laura Ingraham’s endorsement!

This suggests that Carr’s support may be building at the perfect time—even against incredible odds.

Three factors are coalescing at once in Carr’s favor.

Carr still faces an uphill, even impossible, struggle. But the fact that he is this close against a longtime Senator who has taken nothing for granted testifies to the immense power of the immigration issue.

If Carr can win against Alexander, it will make Brat’s victory seem like only a minor skirmish. But the fact is that he has already driven Alexander to desperate expedients that no incumbent Senator should have to take.

The real war will be the fight over the Republican presidential nomination for 2016. It is increasingly clear that the candidate who seizes on patriotic immigration reform will find an army at his back—and a path to the nomination.