Cowboy Versus Indian: Donnelly Not Using Immigration Issue Against Kashkari In CA Race 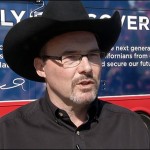 The good news: a California immigration patriot, State Assemblyman Tim Donnelly, seems likely to be the GOP’s candidate against Governor Jerry Brown after the June 3 monster primary. The bad news: inexplicably, Donnelly appears to be downplaying the immigration issue.

I profiled Donnelly in CA GOP Gubernatorial Hopeful Tim Donnelly Threatens To Raise Immigration Issue–Establishment Strikes Back(February 7 2014). A former Minuteman, he was elected to the Assembly in 2010, and led an initiative campaign to repeal the California DREAM Act, although the number of signatures gathered fell short. He introduced an Arizona-style immigration enforcement bill, an important symbolic step even though the Democrat-dominated legislature would never consider it. In 2012, he did succeed in forcing UCLA to discontinue its special reduced-cost “Dream University” for illegal alien students, designed to train “diverse” community organizers.

As I noted, the GOP Establishment did strike back, in the ludicrous form of Neel Kashkari, a former investment banker from Goldman Sachs (!) who also served as a U.S. Treasury official for both the Bush and Obama Administrations, where he was responsible for—administering the TARP bail-out!!! Kashkari has received adoring MSM coverage because he is pro-gay marriage, pro-choice, pro-marijuana legalization, pro-“immigration reform” a.k.a. Amnesty/ immigration surge, and fashionably diverse—he is the son of Indian immigrants. [Campaign for governor a GOP race for second place, by Juliet Williams, The Daily Journal, May 5, 2014]

In California Split, May 16, 2014, the WSJ’s Allysia Finley more or less endorses Kashkari, echoing and justifying Kashkari’s attacks, on Donnelly though she admits that Kashkari faces challenges “winning over conservative primary voters and changing the myopic mindset of GOP activists.”

In this race, Donnelly has been down downplaying immigration patriotism in favor of more orthodox Tea Party issues, especially taxes, spending, regulation and gun rights. You have to hunt for the immigration issue on his campaign website—it’s under “Security” and focuses only on illegal immigration.

Still, when Donnelly was attacked by the Los Angeles Times for a speech he made as a Minuteman (“I am a descendant of Jim Bowie, who died at the Alamo…How many of you will rise up and take his place on that wall?”), he defended himself bravely. The useless California GOP, of course, ran away.

Recently, Donnelly and Kashkari had a head-on debate on the popular Los Angeles John and Ken radio show. (Jerry Brown was invited but didn’t show, so the hosts put a skeleton tagged “Jerry” on the stage). It was a pretty spirited affair in the John and Ken style, although the questions from the radio guys were not particularly probing, nor was immigration examined except for one audience question. The podcasts for your listening pleasure: John and Ken 5 PM; John and Ken 6PM, audience questions

This was the question that should have brought a home run from Donnelly (starts at 3:35 in the 6PM hour):

Audience: My name is Evelyn Miller [presumably the former Board Member of California Coalition for Immigration Reform] and I have a question for both candidates. Are you in favor or opposed to California's spending billions of dollars annually for public benefits to illegal aliens, and if elected what would you do about it?

Kashkari: We need to enforce the rule of law in our immigration system here and the reason that immigration, this is related to your question, is so hard to solve is because Barack Obama does not enforce the law. . .

We all feel sorry for kids who have come here through no fault of their own, but we've addressed that. This is an open-ended entitlement that is going to grow at a rapid rate because people respond to markets. So we should cut off and stop incentivizing with taxpayer dollars services and benefits for those who come here the wrong way and then say, "Hey, we want you here," so let's make a simple way, let's simplify the pathway we already have of legal immigration, because we need more people here. And that's the bottom line. . . [VDARE.com emphasis added].

Apart from the fact that Donnelly did not expose Kashkari as an amnestiac—seriously? We need more people here?

California had an April unemployment rate of 7.8 percent, the first time it was below 8 percent in nearly six years. Compared with other states, one-time economic powerhouse California ranks a pathetic #48. And the tiny improvements in jobs are fueled by the San Francisco tech boom, because overregulation has driven many businesses to friendlier states. For example, Toyota is relocating from Torrance to Dallas [Toyota move to Texas is latest blow to Southern California, By Robin Respaut and Paul Lienert, Reuters, April 28, 2014].

In addition, all of California is experiencing a “severe” drought, as illustrated by the fires near San Diego happening months early in the summer fire season. Daily news reports in the San Francisco area include what towns have instituted water restrictions. It seems like we live in the new normal of overpopulated Crowdifornia, where citizens must have short showers and brown lawns so more immigrants can live here.

What America needs is an immigration moratorium—not another Open-Borders land rush from the Third World.

Let the record show that Donnelly’s orthodox Tea Party approach is not completely unsuccessful. He was “the clear favorite for the live audience at the Ayres Hotel in Anaheim, where the debate was broadcast” [California GOP debate: Heated moments between Donnelly, Kashkari, by Melanie Mason, Los Angeles Times, May 15, 2014]. BREAKING NEWS: A just-released poll shows Donnelly leads Kashkari 18%-11%, although of course Brown’s lead—interestingly low for a coronation— is what interests the Leftist Main Stream Media (Gov. Jerry Brown Leads Poll In Gubernatorial Race, by Adrienne Alpert, ABC7.com, May 21, 2014.)

Donnelly has absolutely no money and has been touring the state in his campaign bus, meeting with local Republican groups in old-fashioned grassroots organizing. Kashkari has put $2 million of his own money into his campaign. [Neel Kashkari drops another $1 million into governor's race, by David Siders, SacBee.com, May 16, 2014]

The result is that he is running TV ads I regularly see here in Berkeley—chopping wood like he’s a regular guy ("I'm not a politician, so I actually understand hard work”) and mouthing platitudinously that would "cut taxes, move people from welfare to work, and take an ax to wasteful spending." (Watch Kashkari’s TV ad—it’s only 30 seconds of snoozeworthy tripe.) 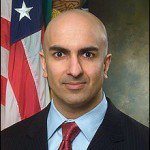 At least Kashkari looks fairly normal in the ad, unlike his flag-background photo, which has to be the scariest political portrait ever.

Kashkari presents himself as the Establishment alternative to Donnelly, and the suits have indeed stepped up to endorse Kashkari, including Mitt Romney, former Gov. Pete Wilson and Rep Darrell Issa, and even Condoleezza Rice.

San Francisco columnist Debra Saunders opines that Kashkari is selling himself to the Establishment as the acceptable loser. How pathetic is that for the Republican Party?

It tells you how completely California has become a one-party state that practically no one in Sacramento believes that a Republican can beat Gov. Jerry Brown in November. But GOP big shots think it is very important which Republican loses to Brown, 76, in November - former Treasury official Neel Kashkari or Assemblyman Tim Donnelly of Twin Peaks (San Bernardino County).

Kashkari's pitch to GOP: I won't embarrass you, San Francisco Chronicle, May 9, 2014

Republican guru Karl Rove told a Sacramento crowd Monday that if California Republicans “have to lose to Jerry Brown,” they should at least pick someone who won’t damage their future with Latinos. [ . . .]

Then Rove also weighed in on the Tea Party gubernatorial favorite, GOP Assemblyman Tim Donnelly, who was the first runner-up to Brown in a March poll by the Public Policy Institute of California.

“The comments that the other guy has made in the past are going to damage the party with Latinos on Election Day,” Rove said, according to our source.

And what were the terrible “comments” Donnelly supposedly made? The Cultural Marxist MSM can turn the most harmless utterances into scandal—remember Romney’s “binders full of women” and “self-deport.”

When Rove appeared on the May 16 Hugh Hewitt radio show, he opined, “Mr. Donnelly is quite prone to sharing the weird recesses and corners of his mind, it could be really problematic for the GOP.”

This barrage is an example of the Establishment Republican War against the Tea Party—the grassroots activists who put the party back in control of the House in 2010.

But what exactly are the suits trying to protect? The California GOP is dead at the state level— despite its getting a reprieve when three Democrat senators (including San Francisco weapons trafficker Leland Yee) were suspended this spring over corruption scandals, ending the party’s supermajority in Sacramento. Why not let the Tea Party have a shot at reinjecting life?

Donnelly is no more verbally lame that many elected officials. But if the Republican Establishment thought police are in pursuit of tiny misspeaks, of course hiccups can be found. Kashkari has problems too, not that anyone cares to look. He isn’t even much of a voter, having failed to cast ballots in 10 of the past 23 elections [Neel Kashkari's voting record spotty since 1998, By Carla Marinucci, San Francisco Chronicle, Jan 21, 2014]. He voted for Obama in 2008. He seems to be running an expensive employment ad, although the goal is unclear. Is he staking a claim to a lesser state office?

Tim Donnelly has a Filipina wife, for Pete sake, But the Rove Squad wants to pin the dread “racist” label on him, just because he has defended America’s sovereignty.

The GOP/ GAP’s problem in California is not minority outreach—it is its chronic failure to mobilize whites a.k.a. Americans. Thus the SurveyUSA poll shows that Jerry Brown is still getting 47% of California’s whites.

The message that immigration should be legal, controlled and reduced is entirely mainstream and should not be feared. California voters would be thrilled to cast a ballot for a like-minded candidate—assuming Donnelly hasn’t forgotten why he got into politics in the first place.